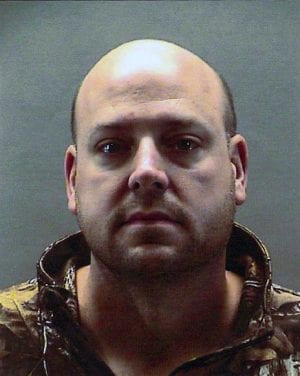 A week ago Thursday, on Oct 17, 2017, Dayton Police arrested Montgomery County Jail Corrections Officer Thomas Conner, a 12 year veteran of the jail. Conner, 39, stands 6’2″ and weighs 220 lbs, and lives in Forest Ridge, was initially charged with domestic violence, but charges were dropped.

To demonstrate what C/O privilege is, he was booked at 0:43 and released at 12:20, which could be considered record time for a DV case where holds are usually at least 24 hours.

. (updated Nov 26) Sources have told me that he wouldn’t let her out of the bedroom- and punched her in the face. His hand is hurt. Yet, the whole thing smells of a coverup.

Early in his career, he was sent to an ethics class to retrain him on the appropriateness of calling black male inmates “boy.” He’s generally despised by inmates according to other corrections officers, often doing unnecessary searches and often hanging up inmate calls because he feels like it.

It’s obvious that Sheriff Phil Plummer has a problem in hiring people to run the jail. One lawsuit after another showcases incompetence at all levels. Domestic violence is a serious offense, and people who are supposedly trained to manage inmates in the most volatile environment should know better than to be charged for DV. If Connor was trained in deescalation tactics, this would have been a prime time to put that training to use- instead of using his fist.

I know this man. Have for years. I know his wife for years as well. I know the whole story, from both sides and it’s not the one you are telling. He loves his children and breaks his back to give them everything he can. He’s not a violent man. He’s a great person and great at his job. Check your facts Mr. Esrati. Or are you trying to get elected off the backs of hard working officers?