Our congress is willing to give our military weapons they don’t want, but won’t give our VA the tools they need to treat our vets. For this- here’s the half a $600 hammer award.

I came here Monday night with a severe case of kidney stones. As a veteran with a service connected health issue, I’m guaranteed health care. I’ve only used the VA for the last 7 or so years- despite having coverage via my partner, Teresa who works for Elsevier. She even reminded me that she could take me to MVH- which is five blocks away instead of to the VA which is five miles away. When you are in serious pain- the idea of closer counts.

I told her I preferred the VA- because all my medical records are there (electronic)- that the people at the VA care about me and that I trust them. 24 hours later- I know I made the right decision. Partially, because instead of being sent home after the stones were removed (less than 14 hours after arrival) I’m still here- taking it easy, with a catheter still in place. At the Valley- they would have been sending me home- because the insurance company said to.

The doctors that worked on me were all fantastic, from the experienced calm hands of Dr. Potts in ER, to the follow up twin geek residents who stepped in after to assess, to the Johns Hopkins trained urologist who ultimately put in a stent, removed the stones and made sure that I wouldn’t be waiting the next two weeks for a very big stone to pass.

But, despite all this stellar work- and support from nurses, anesthesiologists, social workers and even the legal guy who helped fill out the directives before surgery, there is one small issue that needs to be addressed, now, not later.

The urologist is part of a husband and wife team- he wrote the textbook on non-invasive surgery for urological (I don’t remember the rest of it… and my phone was dead, so no picture to show) – and she was the one who answered all the questions and discussed my options. They came here two years ago to help straighten out the department, which apparently was in trouble. I didn’t know this, but there is an international shortage of urologists. They are getting ready to leave Dayton- for points elsewhere. She talked about wanting to be working on troops suffering from extreme pelvic trauma in the first 4 hours after getting hit by an IED- but that the Army won’t take her at 51, she also talked about the fact that military medical system doesn’t integrate as well with the VA as they could- or should, but that’s not the real sticking point.

The fact is, while they can put my stent in- when it’s due to come out in a (a) week– they don’t have the technology to take it out. In fact, they haven’t had it for the entire two years they’ve been here. It seems– and didn’t buy the service contract that guarantees a replacement when this one needs fixed. Apparently, they also don’t have the money to fix it, so instead,. She’s worked in for-profit hospitals and said that she always had the tools she needed because she made them a lot of money. Apparently, to our congressman, it’s more important to write laws that guarantee business for the insurance companies that would have sent me home this afternoon- or to the defense contractors that sell us weapons systems that the services don’t need or want like the C-27J or the M1 Abrams tank. Yep, defense contractors and insurance companies get preference over taking care of your veterans because defense contractors and health insurance companies donate lots of money to our congressman’s campaign- and the VA docs don’t.

If Congressman Turner really wanted to do something to help the VA- instead of creating a media circus over some missing records or a senile dentist gone bad- he’d be asking the docs what tools they need to do their jobs and making sure they had them.

We’ve all heard of $600 hammers- well, in this case, they’ve given my urological heroes half a hammer- the one to pound the nail in, but not the one to pull it out. With election time coming up- and 2 weeks before my stent needs to come out- let’s see if our congressman can work for the people who used to work for the base that he swears his candidacy on. 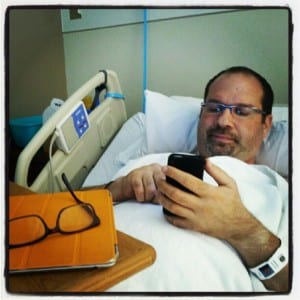 And to all my champions at the VA- if there are other stories like this- where you aren’t given the tools to do your job for our veterans properly, now’s the time to speak up. Please go to a public computer- like at a library, or use a friends home computer or a mobile device at a non-government hot spot- and leave a comment on this post. You don’t have to use your real name or email address, just be honest. Tell us about what Congress isn’t getting for our vets- and let’s let our congress earn their jobs back by getting it to you – before November 6.

Thank you for all you do. – you have the heart that’s missing in the cold world of corporate medicine- and that’s why I choose you first. Because when most of you say “Thank you for your service” I can say the same thing back.

And, special thanks to Director Costie, who even made a bed side visit and is currently investigating this situation as well. My bet is that he gets the stent remover back in service before our congressmen does.

29 aug 10:12 am The head of surgery stopped by with an update- the post is getting read. They have three of the scopes they need- 2 are out for repair. The docs don’t like working without a spare. They also have plenty of a different kind of scope- a cytoscope, which will work to take my stent out. No need to go to private practice. The surgeons want a more expensive type of equipment- that isn’t in the budget- and there are some disagreements on brand- but this is internal politics. All of the equipment was bought within the last 2 years and most of it was put in service last August. They are being careful stewards of our tax dollars. I had this update done once with the right names- but lost my internet connection- via my phone, so it got lost. They still are hoping to add wi-fi to the rooms, but that isn’t crucial to the provision of health care.

If Congressman Turner really wanted to do something to help the VA- instead of creating a media circus over some missing records or a senile dentist gone bad- he’d be asking the docs what tools they need to do their jobs and making sure they had them.

Amen! And get well soon.

Sorry to hear about  your medical problems, if there is anything I can do to help you, feel more than free to ask me; and I will act accordingly. Since Congressman Turner is such a waste of tax payers money, except for his wife’s interest, maybe when Sharen Swartz Neuhardt gets in office, we’ll see a ray of hope for the VA Hospital and its staff.

Hope you’re feeling better, David!  You’re not still in the hospital, are you? Isn’t it awful how you’re starting to fall apart as you approach that half-century mark? ;)

Sorry about the Spam Bubba. Been out of the hospital since Wed. afternoon. Probably shouldn’t have been working yesterday. I go back on Tuesday for the stent removal- oh joy. And, yes, it’s 2 weeks away- and I’m falling apart. But- then again, my hair isn’t gray like yours…

You don’t need to apologize for the spam.  We all know it’s an impossible task to keep it off the site.  It just boggles my mind what purpose the spammers have for posting stupid comments with no links to websites, products, etc.  Oh, well.

Glad to hear that you’re out of the hospital.  You hadn’t made any comments and your last tweet (shown at the top of the website – I don’t twitter) hadn’t been updated either.  I was getting a little concerned. I don’t want to see anything happen to you as this website provides me with a huge source of entertainment! ;)

I know all about falling apart.  I am 33 days older than you which accounts for my much wiser persona.  As far as my gray hair is concerned….  At least I have hair!! :)  And just ‘cuz there’s snow on the rooftop don’t mean there ain’t no fire in the fireplace! ‘Nuf said! ;)

Wishing you the best for your recuperation….

The dirty little secret of the VA: failures in government contracting

[…] the hell out of this crappy vendor?” saying I would write a blog post about this situation (a blog post I wrote in a post surgery fog also got a lot of attention). The next day, a message was on my home answering machine from a woman […]