Someone questions something in Dayton- shoot the messenger.

Yesterday, the Dayton Daily news posted an obituary on Edyth Lewis. In it, they spelled our former mayor’s name “McClin”- for pointing out the typo- I get called names, and one person suggests that if I’d die right now, it might increase my chances of winning some precincts. For those of you who don’t know, the name is McLin. We’ve got highways named after her father, a gym at WSU etc. There is no excuse other than lack of any kind of editing and proofreading talent at the paper.

Also yesterday, someone tried to claim that my recent posts about two former candidates’ death notices- not getting obits was a form of trolling for reads to this blog- and they did it on the article that was there to prove that obits were being missed.

Today, it’s front page news that Miller Valentine has a “plan” for redeveloping the “Fairgrounds like the Greene.” The paper supplies a pretty site plan picture- only, there is no indication that Miller Valentine is doing anything like the Greene. The main differences? The Greene always has had parking garages, and the development has zero exclusive residential – all of the buildings are mixed use. The Miller Valentine plan is decidedly missing both garages and has separate residential. And while they show a 35,000 square foot grocery store, the question is which company is going to use that size space? That’s approximately the size of the Wayne Avenue Kroger store which was deemed in need of replacement- which sucked over $4 million of the taxpayers’ money to create nothing.

Now, Miller Valentine has its hands out for public funds? Who is going to fill these spaces, or are we, the taxpayers, just supposed to finance their pipedream without signed leases and some sort of performance contracts in place?

Anyone can draw a pretty picture and sell an idea, but execution of it is another matter. One only has to look at Miller Valentine’s project “University Place” at the corner of Brown and Stewart to see its total failure to address parking properly- and that there are still multiple vacancies 5 years later should make it clear, this isn’t Steiner at work (developer of the Greene and Easton in Columbus). 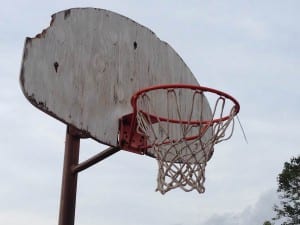 Rotting wood, bent rim. This is at one of our few staffed recreation centers

While I was at Princeton Recreation Center (also known as Northwest or Dabny) hanging nets on Sunday- it was clear the city’s main effort at fixing up the basketball courts has been in the removal of my stickers from the poles – which give the number to call for net replacement. The kids asked me why I hadn’t fixed the crap rim and backboard- next to the rock. It’s not good enough that I hung three top of the line rims there- and keep the nets up. When I suggested they call Commissioner Williams, one of the kids- a girl who was riding around on a bike, dismissed me “we’re just trying to play basketball here.”

Yes, it does. The other day I heard a radio station raving about some crap local show while my nationally touring award-winning show garners little to no attention locally.

David,
I read the comments posted on FB about the obit written for Edyth Lewis. I think you missed the point of the people who were responding and reacting to you. It was an obituary! Family and friends were in mourning while you were pointing out a typo. You don’t mention in your current post the comments you made, in addition to pointing out the typo that evoked such passionate and angry responses from others. Publicly pointing out a typo in a post meant to celebrate a life well lived (while grieving it’s loss) is in poor taste no matter what else was said. I would encourage you to add a link to the FB exchange and give your readers the entire picture, not just your snapshot.
In regard to the kid (girl) who said, “we’re just trying to play basketball here”…bravo to her!!! She didn’t dismiss you. She pointed out the injustice of your statement. Do children who live in wealthier neighborhoods get told by a stranger to “call their Commissioner”? I can tell you from experience, they do not. Why should any child have to start doing the work of the adults? There’s the fundamental flaw with you getting offended by her comment. It’s not about you. It’s about our society and how we fail children. If you are offended by children, maybe you should consider having someone else hang the nets in your place. I admire your efforts in hanging the nets and it sounds like you’re getting burned out, as volunteers often do. So keep the effort going, but step out of the spotlight.
Respectfully,
Jen Kuhn

“Nice typo in the story Amelia Robinson “Rhine McClin, the first black woman to serve in the Ohio Senate, and former Montgomery County Democratic Party Chairman Dennis Lieberman persuaded Lewis to fill her husband’s unexpired seat and to run for his seat.””
My exact words.
As to the teen on the bike- she wasn’t playing ball- and I wasn’t a stranger. The kids all know the net man.

Hi David,
Just add the entire link. And again, you are missing the point. Who publicly points out a typo in an obituary and then adds fuel to the fire by responding to people that are offended? If your intent was to help the writer, a private note would have been useful. Otherwise, it comes across as mocking, superior, and unbearably inappropriate.
In regard to the girl, I stand my ground (without shooting you!). It takes spunk to stand up to an adult. That spunk, if guided with compassion will serve her well into the future. You had an opportunity for a conversation, a chance to reach out (not lecture), and potentially encourage her in a positive/supportive way to take action. Being the net man doesn’t make you less of a stranger to children. It doesn’t earn you undying respect, admiration, and the right to take offense to the voice of innocence. I’m not making excuses. I’m standing up for a child. For all of your bravado, you are sensitive on this topic. Consider another viewpoint. Take yourself out of the equation. Imagine that was some Republican candidate telling an inner city child to “take it up with your Commissioner”. You’d be all over that! You know it.
Respectfully,
Jen

You had mentioned the Fairgrounds and its looney-toon design layout, you failed to mention the Wall that faces Main Street, or what is going to happen to it? I would like to see some of it on Park Drive and Burns Avenue, then that is like spiting in one hand and not in the other and see which one gets full the quickest.

Dying, small city newspapers still in operation (with fewer and fewer staff) are almost all putting out a poor product these days, as often happens in dying industries. There’s no conclusion to draw here about Dayton in particular–it’s the nature of the medium.

Why does Dayton reward mediocrity? You asked a relevant question that deserves answering. I have asked this question daily, sometimes multiple times, since relocating here for spousal-related reasons. Inside the bell-curve comfort zone of mediocrity is where well-placed native and some adopted Daytonites survive. There is no accountability with mediocre. At mediocre, the chosen get away with the most while doing the least. They get coveted jobs with titles (insider trading/Montgomery County Mafia, whatever), outrageously high salaries and local stature while disguising themselves as being in concert with Dayton’s history of (my favorite buzzword) “innovation” and somehow managing to re-brands mediocre as excellence. [BTW, only one of the Wright Brothers was born in the George-Washington-almost-slept-here town despite claims to the contrary.] The attitude is pervasive and insidious. There is no area uninfluenced by mediocrity. Original thinkers, new talent from outside the area and real local talent all get shot down (always for trumped up reasons). Elected, selected & appointed leaderships (Dayton Mayor, City Commissioners & the entire MC patronage system), volunteer organizations, art and entertainment venues, hospitals (a mediocre nurse from a no-name school heads Premier Partners w/annual salary >$7 mil), WSU (the president is a former PE teacher), etc. all are mediocre. When someone w/apparent excellence arrives in Dayton, there are 2 routes for them: if truly excellent, get shot down and leave or they were really mediocre to begin with and fit in nicely with the local millieu.

A professional writer would also avoid using the word ‘seat’ twice in the same sentence, but we all know we aren’t talking about a professional writer. One only needs to look at the front page of the DDN website to see which ridiculous “stories” they deem worthy of their pay wall. I typically don’t browse that site, but a visit just now shows me that I can pay to read an article Hal McCoy wrote 20 years ago – they’re calling it a “throwback”. By virtue of classifying it as “premium content”, I’m calling it lazy.

Everyone is an expert they say. I think quote of yours that “one person suggests that if I’d die right now, it might increase my chances of winning some precincts. ” Actually there are a number of people who could fit into this category. The way I see it, this campaign promise is something people could learn to accept and appreciate. It has the very real potential of uniting and not dividing us.