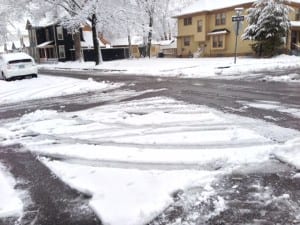 Corner of Bonner and Adams Streets before 8am Mar 25th, 2013

The City of Dayton Street Maintenance department delivered this morning- with a plow, hitting my street (which is three blocks long) and the rest of South Park. This is what we pay taxes for- and it’s the first time in a long time that the City has impressed me in a “snow emergency.” (Here’s a post out of frustration about snow removal from 2009)

Schools are off for “Spring break” this week, so it’s not causing a school shutdown, but, it does have an impact on local businesses who depend on customers who won’t come if the roads are bad. Investing in top notch delivery of services like snow removal has a bigger economic impact in one day, than the “investment” in a private business like Midmark– and is what the city has failed to understand over the last 20 years.

Clear streets are also essential for delivery of police and fire services, if the roads aren’t passable- fire trucks can’t get to a house fire. We also see a dramatic decrease in traffic accidents when streets are passable- all of which are keys to economic growth (unless you own a body shop or towing company).

And, onto who doesn’t deliver in the snow? The Dayton Daily news- can’t get their iPad edition delivered. Apparently the snow is interfering with their electrons getting to my house. I called, and they started to offer the dead tree edition- until I repeated “iPad edition.” Guess I get to read my old stories re-published in the DDn later today- if ever.

But, the real experts at delivery in Dayton today, weren’t delivering in Dayton- they were delivering on the home-court of a lower ranked opponent in the Women’s NCAA basketball playoffs, where the University of Dayton Women’s team went into double overtime to beat St. John’s 96-90. Congrats to the UD Women, who are the best deal and real deal when it comes to watching more hoops for your buck (yep, they sell tickets for a buck on televised games and $5 normally).

If you haven’t watched the UD Women this year, don’t call yourself a basketball fan. And considering that they only have 3 seniors this year, maybe you should be buying season tickets now (the games are all general admission- so I’m not sure they even sell season tickets- yet).

I’m almost tempted to spend the day shoveling snow for campaign donations, but I’ve got a ton of work to do, so get out there and do it yourself ;-)

(note, as I was finishing this at 8:26 the plow just went back down Bonner)

Only in Dayton is two inches of snow considered a snow emergency.

The media has turned so many people into wimps in regards to the weather, especially driving.