In fact, this is such a brilliant solution to crime that the city actively uses this with bait electronics left in plain sight to entrap car thieves.

It’s not right. It’s not the right approach. It’s how losers justify the fact that they can’t do their job- they make excuses; “we don’t have the manpower” or “the judges don’t do their job” or “we’re out of space at the jail.” Our city suffers more because we’ve grown to accept mediocre government as the norm.

Just remember, while Dayton has lost half it’s police force in the last 25 years, UD, MVH, Grandview, Good Sam, Sinclair and Metroparks all have hired their own private police force in numbers to exceed the losses by Dayton. Yes, only rich white people deserve police protection in Dayton.

That includes South Park which gets 2 MVH funded police officers thank you very much. 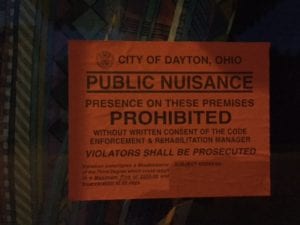 Every time there is a rash of car break-ins in Dayton, someone says “the cop told me to just leave the car unlocked and let them into your car.”
Last week, the city of Dayton came to South Park and told a mentally ill man to leave his home and not come back for a year.

It wasn’t a rental. He owned it.

Yes, he’d had some calls to the house by the police. Someone OD’d one time- on the porch. But, being a den of inequity and a drug house? By the standard set around the corner– he wasn’t close. Yet, the city, declared the house a “Public Nuisance” and kicked out the residents, made it a crime to be on the property for a year, and walked away.

Did they secure the house? No.

Windows are missing. A piece of cardboard in the door isn’t “securing” anything.

If I did this, I’d be facing charges. 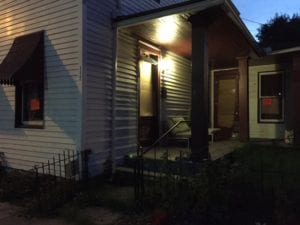 What they’ve done instead is sent a message on a bright orange sticker to scrappers to “please scrap here”- remove all the remaining copper wires, copper plumbing, appliances, mechanical systems – anything of value.

Since the owner is banned from being on the property- he can’t do it.

Gee, this is how to protect our neighborhood values?

I’ve said before that you should be happy if you get burglarized – the most dangerous crime to your property is when a bank comes and forecloses on the home next door. No matter what it was worth the day the Sheriff kicks the tenants out- it will be a lot less by the time the bank unloads it- if they can unload it. If the scrappers don’t come first.

It’s been a week since this mess was created by the City of Dayton.

Let’s see if they can board it up properly before the close of business today?

…be careful that they don’t put that public nuisance declaration on you David. But your description of the Keystone Cop activity in the unraveling in your neighborhood is just another of government failure. The city identifies what may or may not be a problem only to make the situation worse. My guru Milton Friedman was a cornucopia of such examples, but devotees of the First Church of Government are blinded to the obvious solutions. The insist on more divine intervention by their Gods…