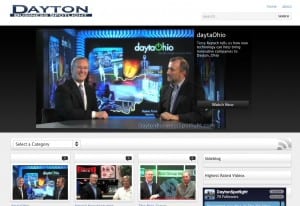 Outside the halls of local media outlets, there are people who actually like Dayton. Phil Herzing was living in NY looking for a place to move to build his business in Ohio, and after comparing all the major cities he decided on Dayton. Once here, he was amazed to hear the lack of pride displayed by the locals.

Phil decided to do something to battle the negativity- by teaming up with Exit Row Productions he started filming short segments on Dayton businesses and why they love Dayton. He’s put these videos up at www.daytonbusinessspotlight.com and has been producing about 2-3 videos per week. Now before you go all pessimistic Daytonian on him- no, he’s not charging to do these, he does them for free.

Go take a look, then write Phil at [email protected]

Now, if only the local media would get a hint. Yes, there are people who like Dayton- actually living  in Dayton.

The city that Dayton should take after Omaha NE, a city that takes pride in itself, but is not arrogant.

Omaha may not be perfect, but they are who they are and they have a nice, thriving, clean DT that attracts all sorts of people, including the beloved suburbanites.

That is the thing with Omaha, you don’t get the feeling it is urban vs suburban. They are country folk who respect the city, and the urbanites understand their place with the suburbanites and farmers. Go figure.

Finally!  I’m sorry if I offend anyone, but having been born and raised here, I love Dayton and there is nowhere else I would rather be.  I’ll be checking out that site later.  Thanks, David!

If you love Dayton you will mention, in no particular order……..

The Wright Brothers
The Airplane
NCR
Mayor McHat
That Ice Cube thingy
Pop Top
The Breeders
GBV
Paul Lawrence Dunbar
The Riots of 196?
Mike Schmidt
Jesse Owens
Edwin B. Moses
Keith Byars
Home of Neil Armstrong
Cigarette Butt Capital of the World
Dayton: Home to the most number of people who can not weed or mow their lawns
UD Basketball

Wow, thanks for the information, David.  And Phil, great work, looking forward to your next feature.

Solid video, I forgot to mention.

No planes or mention of brothers or hats or wannabe athletes or blue collar this and that.

Toronto is great though.

Thank you Mr. Herzing! Will be sending you some link love myself.

@Gene
Don’t confuse my love of my hometown with full acceptance of all of the issues the city has.  Changes in city government can’t come soon enough for me.

Twas a time when media types came to Dayton, fell in love with the city’s ambiance, and stayed. Don Wayne, the avuncular Channel 7 contemporary of Walter Cronkite, turned down mega-bucks and an anchor chair in LA to stay here. Si Burick, who rubbed elbows with such sports luminaries and Joe Falls and Red Smith, would never have dreamed of leaving the DDN for a paper with a bigger circulation. No longer. We are now a sacrificial market where young media types come to get their tickets punched, with neither love nor respect for the city, the valley or its’ citizens. They gain their experience and make their mistakes at our expense. From Len Berman (channel 2) to Dan Patrick (espn) to Tracy Savage (who I knew and loved) they come to Dayton with the attitude of that awful reality show; “I’m a celebrity, get me outta’ here………

Thanks David, for the reminder that one person can make a difference and for identifying Phil as one who is leading the way with conviction.  Dayton IS a great place to work and live!

I ran across this at a Louisville blog.  An example of how one city (Louisville) is so different from another (Dayton).  This guy hits the nail on the head and drives the sucker home, and after reading it you can see how far the Gem City has to go to really really get that local pride/self esteem going:

one thing i love about louisville is how much people from louisville love louisville. love, in the real and true meaning of the word. we are a fiercely loyal and proud people: if all of the tattoo shops in town offered free fleur-de-lis on the fourth of july – and they should – there would be 10,000 takers.
there are precious few places like louisville left in america in this regard – places where the people are spiritually tied to the land by their collective memory of the best and worst of times there: new york and new orleans; pittsburgh – towns where you can wake from a bad dream in the middle of the night and talk about it with your bartender at 3am; the kind of places where when asked, “where ya from?” you answer, “i live in washington (or california, or texas) but im from louisville, kentucky,” even when you havent lived here for 20 years. . .
a wise man one said, “if you were alone, you could walk away from louisville.” but as long as you love louisville, youll never be alone.