Up steps Steve Budd of CityWide Development (the slush fund) with a slide of the holdings of CityWide, Miami Valley Hospital and maybe even the University of Dayton between 35 and Wyoming Street along the Brown/Warren corridor. And, no, we won’t mention the words we used to call this development (Mid-Park) because we know it ticks off the people we’re talking to (South Park) about our little circus.

The map with the yellow line was showing “all the property we own” except for the little antique shop at Oak and Warren according to Mr. Budd. Except he quickly was asked if he owned Jimmie’s Ladder 11, Spin City- and oh yeah, the two houses that are left on the West side of Warren- where the powers that be haven’t made an offer with enough commas in it yet. 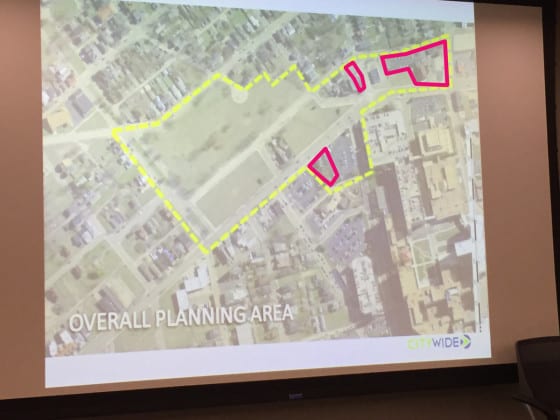 The “owned” area in yellow- the red, added by me, is the stuff that’s not owned by the developers including Spin City, Jimmie’s Ladder 11, the Antique Shop and the two houses on the west side of Warren

I’ve marked the known “not owned” in red- inside the yellow border of “owned” for clarification. No mention was made of the fact the city had “misdeeded” some of the real estate in question in a lot links deal- and someone may be holding out for another pretty paycheck.

Why they were talking to the neighborhood at all is a really good question. At no point have they come to us, the neighborhood, and actually asked what we want- just what we want to see as tenants in their grand building plans- you know, the norm- a grocery store, a hardware store, a book store…

The parcel in question came into their hands when DMHA/GDPM gave up on their “projects” off Warren which were part of the 60’s 70’s “urban renewal” programs- where they tore down perfectly good housing stock that had lost its luster and replaced it with crap construction of ugly buildings dropped out of the sky into our ‘hood. The promise then was that it was going to be “senior housing” – the only thing senior about it, “Cliburn Manor,”  when I moved into South Park in 1986 was it looked like it was near death.

So the slush fund has to make sure they have another success story in the portfolio of mismanaged tax-dollar aided projects, and is bequeathed the federal property to manage. They seek out a developer, who is willing to take a “great risk” building something in the city of Dayton- so they promise to make them whole, no matter how silly the project scope and scale is.

In this case, the developer is Oberer. The same people who did the funky deal on the Dille Farm, where they built a Costco in Centerville, but expect ambulances from Sugarcreek Township- as once again, government had inserted itself unnaturally in the middle of a real estate deal. They have hired, at considerable expense, some research firm to tell them that there is a market for the 200 plus units they’ve plotted and planned for the aforementioned area. Of course, they are going to do this deal with OPM (other people’s money) and are guaranteed by the taxpayer-funded slush fund that they won’t lose a dime- since we know we’ll make income tax go up while you build it- and who cares if anyone actually comes. They just have to “git ‘r done” and have something rise from the green space. Filling the space won’t even fall back on them. Look at how CityWide still hasn’t found a ground floor tenant for the old Elder Beerman/ReyReyTAC building downtown.

If you need an example of another project that was done like this, go study the history of One Arcade Tower/One Dayton Center/Fifth/Third Center– or whatever they call it at the corner of Third and Main. The one that wasn’t supposed to be built until 33% of it was leased- but, we ignored it and built it anyway…. and lost our butts.

In our third ring of the circus, we have the architect. While an equal player at this point- he’s really going to end up the ringmaster later, once construction begins, but for now, he’s just another part of the distraction engine that’s trying to divert attention from the fact that Dayton is looking at these new construction projects like the Cleveland Browns do when playing the Patriots- let’s keep throwing Hail Mary passes because we’ve already lost 8 of 12 and aren’t going anywhere.

The architect, in this case, Jason Sheets of Moda 4, is a super talented guy who makes cheap look chic, and clean and classy. The only problem is, we’ve already got a few examples up Brown Street that make anything look like an improvement- namely the horribly ugly and dysfunctional “University Place” that Miller Valentine built at the corner of Stewart and Brown- which still isn’t full- years later- and almost every restaurant has taken a year to build out- because of poor planning by the “architects” – and then the other Miller Valentine embarrassment- the heinously ugly mishmash finish Caldwell Street housing that replaced the irreplaceable Frank Z building on Brown. His role in this is to keep billing while everyone else argues about the plan.

Moda 4 just completed the Goodwill Building across from Coco’s- the one with the expansive parking lot- and the stark cold exterior. Not exactly a good match for eclectic South Park- but, we’re trying here.

We’ve already got a CityWide case study up in Fairgrounds- where the Genesis Project built a whole bunch of funky houses and row houses for “DINCS” and hospital employees and UD Profs- that was promised never to become student housing (they lied). Where roofs are leaking less than 10 years out, taxes are kicking in at the same time, and what was supposed to be full of homeowners- is now in flux.

As the homeowners filed out, wondering if what they’d been shown was anything like what will be built, one after another in the Goodwill parking lot- looked across the street at Marvin Gardens, which is owned by St. Mary Development Corp.- and thought- why can’t they build something that looks like that? 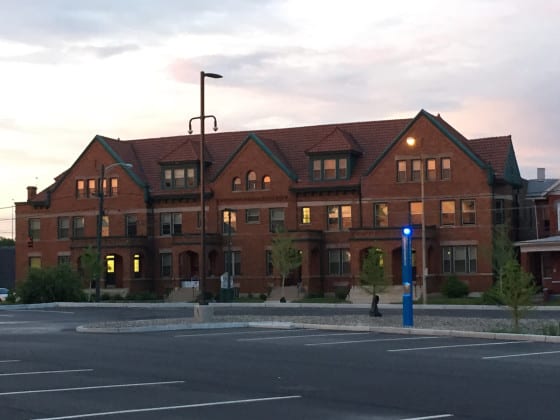 So as neighbors sat and looked at the presentation, with mouths agape, wondering what planet these people were from, they were serving their ultimate, yet, unrevealed role they will be used for in the future.

As the project sputters and spurts, the three-ring acts will be able to point at the neighbors and blame them for the delays, mistakes and failures that are to come, as the city shirks its responsibility to do what it’s supposed to- mainly sweep and repair streets, provide public services and safety forces and keep the lights on.

The only question that really needs to be answered is why the property wasn’t just sold off to the highest bidder and let them do as they please?
In the end, the results will probably be about the same.

The DDn has an article behind the paywall today: http://www.mydaytondailynews.com/news/news/new-development-planned-for-daytons-south-side/nmQWt/#579d244b.2754953.735747
Has the one “artists concept” that shows the most trees and least building details.

As I sat thru this meeting (glowering at a certain person from the hospital in the back of the room) all I thought was who the hell is going to live in all of these developments?? Regardless of the fact that I work in RE, but just do the simple math – Cliburn Manor redevelopment + Fairgrounds redevelopment = 400 +/- new housing units??? We cant get cute little cottages occupied much nonetheless larger properties in need of serious rehab sold. Worse yet – no one knows what the other guy has got planned. Oberer isn’t talking to Miller Valentine. Citywide is a poor mans version of Switzerland. And from what I could tell at that meeting, the powers that be really don’t care to talk to anyone from South Park. I called my Dad after the meeting and could not help but say “The new Section 8 is going to look a whole lot like the old Section 8”. This entire deal just reeks of City Hall’s attempts to do something, ANYTHING to get people to stay in Dayton. This is just a bad idea on so many levels.

Well, if you didn’t like this, looks like you won’t have to worry about it, at least not for a while. Check out the DDN. Looks like the city accidentally transferred this deed to someone for a whopping $650—even though the assessed value is $340k. A city official admitted that the city “erred”–I guess that is one way of putting it. Now the guy is demanding market value for the five acre plot. Not that I know enough about Citywide to have an opinion or not, but is this karma? Even though the guy that bought it seems like a jerk in the article, its not his fault people didn’t do their job. Only sucks that folks like us that live in the city have to put up with it and probably foot the bill to get it back.

“No mention was made of the fact the city had “misdeeded” some of the real estate in question in a lot links deal- and someone may be holding out for another pretty paycheck.” Well- the Dayton Daily followed up on this a week later-

The city of Dayton transferred the deed of a 5-acre parcel with an assessed value of $340,000 that is targeted for development to a private company for just $650.
The property, located near Miami Valley Hospital, is the proposed site of new cottages, town homes and other housing, which are part of the Warren Street redevelopment project.
If the city wants the property back, it will have to pay a “fair” price, based on market value, said Eric Segalewitz, the deed’s new owner.”

[…] Down the street on Warren, you have a 5 acre property the city mistakenly sold for $650. Then CityWide, the quasi-public slush fund selected Oberer Development to do “development”, but no one knows how much they had to pay for the property or what they will eventually put on it, […]