Sa-Bai was another instance of the City of Dayton trying to play developer. The space, formerly Chins, then Chins and Elbos, then just Elbos, then empty- was leased to an operator out of Cincinnati at a bargain basement rate.

The “experiment” lasted a little over a year. In December, they had a sign $1 sushi all day. This was from a place that was charging $14 a roll when they opened.

Sa-Bai is bye-bye now. Once again, the taxpayers are left holding the bag. The $1 sushi sign isn’t out, the phone is disconnected, not even a “sorry, thanks for your patronage” sign in the window. 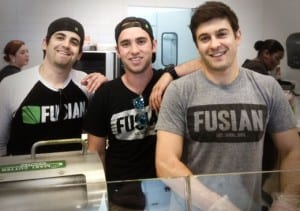 But, don’t worry- over on Brown Street you can get excellent sushi from Fusian, a business started in Cincinnati by three kids from Oakwood. A roll will set you back $7.50, be made in front of your eyes- just the way you like it- and the place is always hopping. And, besides the tax breaks and advantages given to UD and Miller Valentine, no public dollars or breaks flowed into the pockets of team Fusian.

Fusian is one of my favorite places to eat in Dayton- the staff is always friendly, upbeat and cheery. The food is awesome and fresh, and affordable. A hit with UD Students, they just opened a location in Columbus near OSU. Comparisons to Chipotle are inevitable, and it’s even part of their plan to locate near existing Chipotle locations. I’ve known all three of these young men since they were in their teens. You can’t find three nicer guys.

I won’t miss Sa-Bai a bit, but if Fusian left, I’d be devastated.

I would’ve told them FOR FREE that the building is invisible. Do biz owners do ANY research?! Did they EVER eat at Thai 9? Did they ever stop & look to see how many cars pass? etc.

Ultimately, Sabai failed for one reason: their food wasn’t very good. Had that space been filled with a restaurant with good food, say Lihn’s, it would still be in business, and doing good business.

I thought the food was pretty good, at least the things I tried (just the Thai stuff; I’ll eat sushi when I’m within a few hours drive of a coast, thanks). It’s just they offered absolutely nothing that Thai9 didn’t do better.

The Dayton Daily News finally picked up on the Sa-Bai closing: Sa- Bai restaurant, which city officials had hoped would breathe new life into vacant space at the gateway to Dayton’s Oregon District, has been ordered to vacate the premises because it owes more than $60,000 in back rent, fees and other charges to the city of Dayton, according to city officials. “If you do not leave, an eviction action may be initiated against you,” Michael Cashman, acting director of the Dayton Convention Center, wrote to Sa-Bai LLC care of Cincinnati-area restaurateur Chanaka DeLanerolle in a letter dated March 11. DeLanerolle, who could not be reached for comment Monday, owns The Celestial and Teak Thai Cuisine in Cincinnati. Sa-Bai is in the Dayton Transportation Center complex, which is managed by the Dayton Convention Center and owned by the city of Dayton — making the city, in effect, the restaurant’s landlord. The space, at 200 S. Jefferson St. at East Fifth Street, was vacated by Chin’s Oriental Cafe in 2003 and by Elbo’s bar/ lounge shortly afterward. The city’s letter says Sa-Bai agreed in its 2009 lease to pay $11,572 a year in rent in addition to utilities, taxes and assessments. City officials told the restaurant’s owners that the city is terminating the lease. It has been several weeks since Sa-Bai has been open. But Cashman said in an interview that the restaurant’s owners have been assuring city officials that they intended to reopen with a new concept. Sa-Bai had done that before, in October 2012, when it closed for two weeks and reopened with what Sa-Bai’s Facebook page called “a revamped menu and all new staff.” During the recent, more extended closing, the restaurant missed deadlines it had set in its promises to the city to reopen, so city officials decided to proceed with the order to vacate, Cashman said. City officials announced in June 2009 that it had signed a lease with DeLanerolle, and at the time, city officials said the restaurant would likely open before the end of the summer 2009. Instead, it opened in June 2011. via… Read more »

The DDN finally picked up this story: http://www.mydaytondailynews.com/news/news/local/city-lease-gamble-fails-to-pay-off/nYP36/?icmp=daytondaily_internallink_textlink_apr2013_daytondailystubtomydaytondaily_launch