Last week Craig Woolley was the hatchet man, going around giving people walking papers. He was the “Chief Information Officer” at Wright State, but didn’t know the difference between hiring an ad agency and hiring a media buyer. His head of marketing is more a web developer than an ad pro. If you need proof that creativity isn’t in their wheelhouse- look at campaigns that are still plays on “Wright/Right” and saying stupid things like “Wright Choice.” The schools in turmoil, and they think a billboard with tired puns is the answer.

Today, Esrati.com learned that “Craig Woolley has informed his staff and university leadership of his intention to leave Wright State University for a CIO position at Louisiana State University (LSU). His last day at Wright State will be July 31” according to Seth Bauguess, the Director Office of Communications. 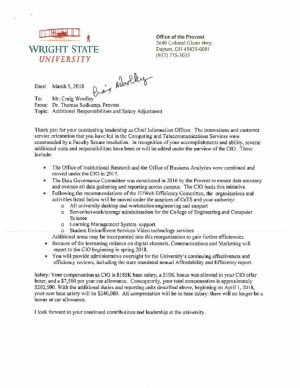 Wooley was paid $240,000 a year as of his last raise April 2018. Previous to that, he was overpaid with $185K base salary, with a $10K bouns with his CIO offer letter and a $7,500 per year car allowance which had totaled $202,500. His current pay had no bonus or car allowance. That deal was signed off by former President Cheryl Schrader, to Dr. Tom Sudkamp who was then the provost.

This is the part that kills me. Instead of hiring from within, someone brought this guy in from Florida- where he had absolutely no experience in marketing.

Woolley has 27 years of experience in managing higher education information technology and strong technological skills in many areas of IT, including workstation support, database design and server administration. In addition, he has a proven track record of building trusted relationships with faculty, staff, students and vendors.

As assistant vice president for University of South Florida Information Technology, Woolley oversaw a budget of $25.5 million and more than 135 employees. Prior to that, his positions at South Florida included director, user support services; director of computing, College of Arts and Sciences; and director, technology services and resources, College of Education.

Five and a half years and out, with the university in a way worse state than it was when he came.

My conversations with Woolley in the past led me to believe he couldn’t tell you what ad agency did 1984 for Apple or who W+K was. If you said “Bogusky” to him, he’d probably think you’re talking about golf. (note, I own a local award winning ad agency and am a Wright State grad).

Word is that Woolley also fired 9 people from his own department. The “geniuses” that Cheryl Schrader hired to do the big strategic plan are gone- Mike Wiehe who was a straight political hack, is out. No one has compiled a complete list of terminated folks yet, but, with Greg Sample at the helm, there is no rudder. Sources say they also fired the people in career placement. I guess you don’t have to worry about students getting hired after graduating if the University won’t survive their “leadership.” 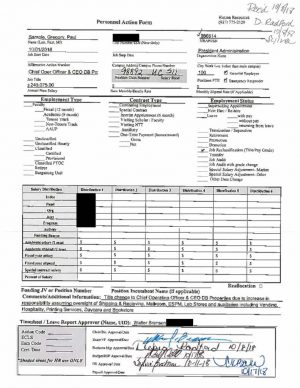 Greg Sample has done really well, despite being the engineer of the entire Double Bowler fiasco that helped sink the university to a $130M deficit. Paid $273,982.50 as COO & CEO DB Properties on 1/1/19 up from $249,075 on 10/1/18 Current WSU President Sue Edwards as one of her first acts, on Jan 14,2020 gave Greg the position of Executive Vice President and Chief Operating Officer in Office of the President effective Jan 1 at an annual salary of $301,308.80. For this bump, he takes over “reporting responsibility for Purchasing, Contracting, Athletics, Communications, VAP Public Affairs and the Director, Strategic Initiatives. The AVP Public Affairs (Bob Hickey) has informed the President they will be retiring at the end off the academic year and Greg will subsequently self-perform the majority of those duties as that position will be eliminated. Greg is relied upon to directly assist with both Board of Trustee and state government relations and is viewed as an executive level employee.”

Samples’s first major initiative was to start selling off the whole mess of Double Bowler and other far flung outposts after laying off a lot of people and consolidating colleges within the university. When looking for history on Sample and his qualifications for this position, there are few examples of life online. No Linkedin profile, and mostly references to either working for RG Properties (developers of Austin Landing) or Double Bowler. Before RG he was at GDAHA (Greater Dayton Area Hospital Association), the questionably legal trade association for local hospitals (price fixing and collusion)  before that, Sample was senior director with SBC Ohio, where he oversaw external and corporate affairs for western Ohio. He was also the mayor of Franklin at one time. Not the normal career path for a State University Chief Operating officer. Another local university president told me a story of how Sample came to him with a proposal for something like what he planned for Wright State before he got going on his path of destruction- he was laughed out of the office and told to go away.

Wright State still doesn’t have an effective positioning plan, unlike Clark State or Sinclair Community College which both seem to be well run and not seeing huge enrollment declines thanks to bad mis-management. Wright State just hired a long time enrollment management guy from UD- who was supposed to help Woolley with student recruiting, it looks like his first job will be to recruit a replacement for his former boss.

In the meantime, no one at the university is willing to sit and listen to a plan I’ve had since 2007 for repositioning Wright State for the future. But, you know the old bumper sticker “minds are like parachutes, they work better when open.”

You have thankfully pointed out in a public forum what most Wrong State insider/outliers have aways known: If there is an unqualified, unprepared, incompetent, possibly criminal-history crony out there, they will ALWAYS get a Wrong State University appointment/job before a qualified individual. Look at the idiot former President Schrader. (You have already discussed the Wonder Boy, Hopkins.) Basic Google search of her should have prevented an interview let along becoming….well all you know the rest of the story. Now we have “Sue.” The medical school has hired similarly unqualified creatures–one was a pervert Chairman that photographed women/young girls– with a pocket camera while he did pelvic exams. The Marvel Dean Margaret Dunn covered it up when it was brought to her attention and allowed him to leave on his own terms (info retrieved from MC Court documents.NO ONE at DDn bothered picking this story up. Had they, the doors would have been shut a long time ago.). Med School Admin rigs the promotion system so their Cronies come in at senior academic rank when they barely qualify as an assistant professor. The Wright State Physicians has a slush fund that moves millions of $$$$ generated by WSU physicians who see patients into the hands of the corrupt Dean & her cronies. Some departments that have medical services NOT covered by insurance (that is, they have to pay out of pocket) have been the most likely to have their earnings magically and allegedly appear in a deficit and they rig it such that the poor physician that is earning the untraceable cas has overhead charges that far exceed his/her peers that rely on insurance reimbursement payments. When the faculty/medical professors then complain as their contractually guaranteed earnings illegally plummet to poverty levels or they work for free, they are bullied, sometimes illegally fired after magically appearing false allegations are waged against them. This is absolute fact. Read MC Court records on some of the lawsuits. And the perps still have high paying jobs! Then there was the immigration/work program scheme/hoax the FBI kinda took care of. The Lost Presidential Debate…. And… Read more »

In the late 1960s, Wright State appeared on the fringe of the Miami Valley. Finally, a full scale college to allow lower income residents a chance to get a real college degree. No longer was an associate diploma from Sinclair the best a kid in our area could do; and, WSU removed the higher UD tuition as an obstacle. I know, because I was one of those early year graduates of Wright State. Over time the expansive development elevated WSU from a pretend operation w/ only 4 buildings to a more than real learning center. Then after arrogant yet qualified Presidents like Kegerris and Golding a slide began. Slowly, the people hired to advance the place were of less competence and did little more than tarnish the reputation of the school. David tells the story ever true. But, fact of the matter is this is not a recent phenomena. Who or whom deserves the blame for this momentum to the malaise? Well, I’ll pick the worthless trustees. They made one bad personnel choice after another. Even after pushing the university into an equivalent of the ever popular culture of corruption, this cast of boobs maintained their positions of direction. Every single one of them, most especially the chair, should’ve been flat out dismissed! Instead they kept authority and refused to prosecute the line-up littered with mistakes. The biggest error without doubt is affecting Prez. Hopkins to hang around and finally leave w/ a big payday. He and his complicit henchmen should all be scratching out financial withdrawals and returning the ill gotten gains to WSU. Instead, the place continues to hand out undeserved, unearned, unsustainable edu-welfare. The med school has secured international acclaim, So too the theatre program. But, as David points out, apparently the marketing posse missed the point of leveraging your assets. Hell, even the basketball program has become a twinkle of pride, but, Grant the AD apparently can’t figure out to turn the exorbitant coaching salaries into sold out games. Over the years, this once highly regarded small university has received plenty of suggestions on going beyond… Read more »