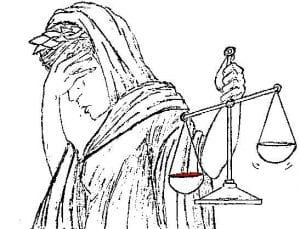 Alan Gabel is about to get a dear John letter from the Montgomery County Board of Elections. He was rejected in February for petition vagaries  (the judgeships are identified by their start date of term, he had the wrong date for the seat) from running for judge against Erik Blaine for Montgomery County Common Pleas court. The bar to get on as a Dem, 50 valid signatures. He then turned around and collected signatures, he turned in 3108 of them, from registered voters to run as an independent and turned in enough valid signatures (he needed 1459) to appear on the ballot.

However, the Board, made up of 2 democratic party  and 2 republican party appointees- decided that he couldn’t run as an independent, overruling the voice and will of the people, because he was “still associated as a dem.”

Note, judges names on the ballot appear WITHOUT party affiliation.

A three way race for judge is almost as unheard of as anyone challenging a sitting judge, except in their first race. Blaine was appointed by Governor Kasich to replace Michael Tucker, who won an unopposed race for a seat on the Second District Court of Appeals. This is his first election. Previously, he’d worked at Wright & Schulte since January 2012 and he’s the Chairman of the Greater Dayton Area Friends of the NRA according to the Dayton DayOld News. Blaine, a 2006 graduate of the UD Law School is a relatively young for a judge. (Full disclosure, my case against Dayton Metro Library is in his court)

Last time I looked at a voter lists just before the May 8 primary, it struck me that there are a lot more UNC (undeclared) voters than there were D or R, which begs the question, why don’t they have at least an equal voice on the Board of Elections. What’s worse, is that on election day- if there is a dispute, the tie breaker as designated in Ohio, is the Sheriff- which in this case, means the head of the Republican Party casts the deciding vote.

That the BOE is appointed, by people who are marginally elected (precinct captains of each party- like me) is one of the political travesties allowed in Ohio.

Alan Gabel should be allowed on the ballot, the voice of 2000+ voters should outweigh the decision of 4 political patronage partisans on the BOE.

And, remember- you read this story on Esrati.com first. The Dayton Day-Old news won’t attribute who broke it.