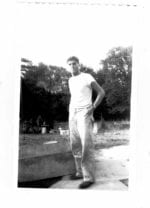 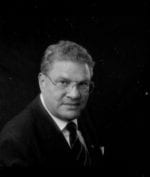 Publicity photo circa 1982-84 for book by Herb Ascherman

There has always been a file on my fathers computer “death and taxes.”

In it, were very specific instructions on what to do after he passed, which he did, peacefully and painlessly at age 89 in the Dayton VA Hospice this morning.

This is the obituary he wanted me to share.

Stephen G. Esrati, 89, a retired copy editor at the Cleveland Plain Dealer and a prolific philatelic journalist, was among the first American hostages in Lebanon.
He also worked on the Boston Herald-Traveler, the Celina (Ohio) Daily Standard, the Van Wert Times-Bulletin, and the Toronto Globe and Mail.
Born in Berlin in 1927, Esrati moved to Palestine in 1933 and to the United States in 1937.
He had two degrees in political science from Boston University.
He served in Italy in the 88th U.S. Infantry Division after World War II and was recalled to active duty during the Korean war. He also served in the Irgun Zvai Leumi, a Jewish underground army in Palestine. He was active in the U.S. Army Reserve through 1960, last as a sergeant first class in the 320th Special Forces Group in Boston.
His experience in Special Forces formed part of the background for his first novel, Comrades, Avenge Us.
Esrati and 60 other men were removed from a U.S. passenger ship, The Marine Carp, in Beirut on the day after Israel declared its independence.
His non-philatelic writings appeared in newspapers in three continents. He was honored by induction into the Philatelic Writers’ Hall of Fame of the American Philatelic Society.
He died peacefully of old age August 18, 2016 in the Dayton VA Medical Center Hospice. He is survived by his wife, Nina B, and his son David.

He donated his body to the Wright State School of Medicine. There will be no services.
If you want to honor him, read the free book he wrote to me in 1969- “Dear Son” and leave a comment, or pick up a free copy of his historical fiction “Comrades Avenge Us” at my office, 100 Bonner St. Dayton Oh 45410- with the promise of writing an Amazon review when you finish it.

Update: 19 Aug 2016 Someone said they were listening to my StoryCorps interview of Dad. Here’s the link: https://esrati.com/storycorps-interview-of-stephen-g-esrati/4813

It seems as though your Father was a great man, who raised another. Continue your work in Dayton Esrati and thank you for letting us all in on something so personal. I have thoroughly enjoyed reading about your Father and would definitely like a copy of his book.  Take care of yourself and your Mother. Sorry for your loss.

Sorry for your loss David, you were a loving son who spent quality time with his father the way most people only wish they had.        I know you will miss him.

The apple falls not far from the tree. Truly sorry for your loss and the loss to nation of such a fine man.

I’m sorry for your loss. He sounds like a very interesting man.

We have no control over losing a love one other than keeping their memory alive and their love in our heart – thanks for sharing David.

What little time I spent with your father I truly enjoyed his company as well as his wife your mother Nina. I had given your father an old tattered book on the First World War a while back, a couple of days later I saw him and he smiled and thanked me again for the book. He showed me some pictures of the 88th from WW I, with him saying proudly, “That’s my old outfit” he then gave me a detailed outline of the 88th that was so powerful, I wanted to go down and enlist. You Dad will be missed; with my deepest sympathy to you and your mother.

There is an African saying that it is a good thing when the children lay their parents to rest. That they live a good life and raise good children is a testimony to a life well lived.  Sorry for your loss, but glad his legacy lives on in you.

Sorry for your loss David. Praying for you and your mother.

I just read this, David. Sending love, light, and compassion your way at this difficult time for you and your mother. Thank you for sharing this. What a remarkable man your father was!!!….as are you! My condolences.

David – I was truly saddened when I saw this today.  I know that he’s been a HUGE influence on your life and views.  I also know that he will be greatly missed by you and your mother.  From the stories you’ve shared, he’s had a great and interesting life.  There are not too many people on the planet that can lay claim to having served in the Irgun Zvai Leumi as well as having personally known Dr. M.L. King, Jr.  Your father could make that claim though.  I do regret that I never got the chance to meet him.

You were a good son to him.  He may not have always expressed it, but I’m sure that he appreciated all of the sacrifices that you’ve made to take good care of him and your mom in the last several years.  All the best to you and your mother.

I was reminded by friends of this storycorps interview I did of him: https://esrati.com/storycorps-interview-of-stephen-g-esrati/4813

Condolences on the loss of your father. It sounds like he was a wonderful person.

May your memories of him give you comfort.

My most sincere condolences on you father’s loss. In quiet times, I hope you have the opportunity to feel his presence still with you. God grant you and your mother comfort and continued blessings.

My mother and your father were first cousins who survived the Holocaust and displayed courage, strength, and very strong opinions throughout their long lives.  We have much to admire them for and hope we inherited some of their genes (the good ones)!

He was the last of my mother’s original family and I know she will miss him dearly going forward.

I will come and visit you and your mom in the fall.

So sorry for your loss.  I never met your dad in person, but we corresponded for some fifteen years on the Internet.  I first “met” him in connection with the Berlin Zoo, of which both our families were stockholders, only to be robbed of this property in the Nazi period.  Your dad always was most supportive of our efforts to publicize the matter.

To Nina and David,

Just heard about Steve’s death. So sorry. He befriended me and taught me so much (especially the failings of the AP). My condolences to both of you. I will miss him.

David sorry for your loss, just heard about it, condolences to you and family. Thanks for sharing and the book for all to learn from.

Our dads are always with us. My Pop passed away twenty-five years ago — I regularly find him in how I see and value things and in what I think is funny.

Sorry for your loss. Sorry I never had the opportunity to meet your father. I will read his book and make comments before the new year.

I came across your father’s name reading his Amazon review of the Forgotten Ally, in the hope that I could have asked him some other questions about the book’s factual basis. Van Paasen is certainly a name that comes up in my discussions and I have taken his book as a useful source to refer people to in discussions. I obviously wish to still recommend the book, but might add a caveat regarding some non-factual parts.

I am sorry to learn of your father’s passing and I send my condolences.

Thank you all. And Joshua, Dad would have loved to talk to you about any book- at any time.

I miss him daily- but not the guy who was in the VA in the final 3 months.

My mother misses him- but, dementia has dulled the pain.

I have  just read the above and wanted to express my condolences to you David and to your Mother, Nina . Please remind me to her.

I made Aliya in 1961 and lived here in Haifa ever since.

I only knew Steve by email, but Nina and I both hail from the same Jewish Community in England, Sunderland.

We corresponded several times and he sent me his books. Also the history of his Father and his cv was included in a compendium of Medical Practitioners in Mandated British Palestine Eretz Yisrael, edited by my  friends and colleagues Prof Nisim and Yael Levy. “The Physicians  of The Holy Land 1799 – 1948”.
I had also met Moshe Arens, ex Israel Minister of Defence, and his wife, both mentioned in the article, companions to Steve in Betar.
I would like to offer my sincerest condolences, and other good wishes.
I had the greatest respect for him and his achievements.

Steve was also involved in Betar with my late in law Mottl Kreiner. Z”L

May they never have future sorrow.

My father was also on the Marine Carp and was taken into custody at Baalbek. He later returned to Israel and lived there in 1950-51, at which time he had to return to the States because of my mother’s severe asthma. My father’s brother also volunteered, and he was killed in the fighting in the Jerusalem in 1948. I was born, irony of ironies, in Bronx Lebanon Hospital in 1952. And I was also a copy editor at one time, before becoming a managing editor.

My father was also a volunteer and was also on the Marine Carp when it was captured. He didn’t talk about his experience as a prisoner much, but he did say that in his opinion, the State Department had “tipped off” the Lebanese. After the war, he came back to Israel in 1950-51, but had to return due to my mother’s severe asthma. In a strange twist of irony, I was born in 1952 at Bronx-Lebanon Hospital.

Just reading “Tenth Prayer”. Not surprised that your father worked for the Boston traveler. I can tell from his description of Temple Mishkin Tefillah a cross from Franklin park that he had stood there at one point

My mother grew up down the street