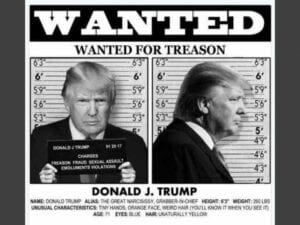 Let’s talk about treason. It’s the only crime that’s defined in the U.S. Constitution in Article III, Section 3

Treason against the United States, shall consist only in levying War against them, or in adhering to their Enemies, giving them Aid and Comfort. No Person shall be convicted of Treason unless on the Testimony of two Witnesses to the same overt Act, or on Confession in open Court.

Article III, Section 3 authorizes Congress to set the penalties for treason, but not to change the definition or create degrees of treason. The federal treason statute, 18 U.S.C. § 2381, mirrors the Constitution’s language and imposes minimum penalties of five years’ imprisonment and a $10,000 fine. A conviction bars the defendant from holding any federal office and carries the possibility of the death penalty.

Source: How Is Treason Defined in the Constitution? What Are the Federal Criminal Penalties for Treason? | CriminalDefenseLawyer.com

Surprisingly, it’s not been used very often. Total count of folks tried for treason? 27 or so. Most famous? Aaron Burr who was tried and acquitted. Some of the offenses seem insane: William Bruce Mumford, convicted of treason and hanged in 1862 for tearing down a United States flag during the American Civil War. A bunch of folks during WWII got in trouble for either defecting or harboring escaped prisoner of war. The last person charged was in 1952 and that case was sort of misguided since it was against a Japanese American who thought he’d already lost his citizenship.

Julius and Ethel Rosenberg were American citizens who were convicted of spying on behalf of the Soviet Union. The couple was accused of providing top-secret information about radar, sonar, jet propulsion engines, and valuable nuclear weapon designs; at that time the United States was the only country in the world with nuclear weapons. Convicted of espionage in 1951, they were executed by the federal government of the United States in 1953 in the Sing Sing correctional facility in Ossining, New York, becoming the first American civilians to be executed for such charges and the first to suffer that penalty during peacetime.

Lately, the Espionage Act of 1917 has been used instead of Treason to charge people for risking American’s lives, a few of the most recent high profile targets?

Chelsea Elizabeth Manning[3] (born Bradley Edward Manning, December 17, 1987) is an American activist and whistleblower.[4][5][6] She is a former United States Army soldier who was convicted by court-martial in July 2013 of violations of the Espionage Act and other offenses, after disclosing to WikiLeaks nearly 750,000 classified, or unclassified but sensitive, military and diplomatic documents.[7] She was imprisoned from 2010 until 2017 when her sentence was commuted.

Edward Joseph Snowden (born June 21, 1983) is an American whistleblower who copied and leaked highly classified information from the National Security Agency (NSA) in 2013 when he was a Central Intelligence Agency (CIA) employee and subcontractor. His disclosures revealed numerous global surveillance programs, many run by the NSA and the Five Eyes Intelligence Alliance with the cooperation of telecommunication companies and European governments, and prompted a cultural discussion about national security and individual privacy…

On June 21, 2013, the United States Department of Justice unsealed charges against Snowden of two counts of violating the Espionage Act of 1917 and theft of government property,[2] following which the Department of State revoked his passport…

Snowden has been variously called a traitor,[5][6][7] a hero,[8][9][10] a whistleblower,[11][12][13][14] a dissident,[15] and a patriot.[16][17][18] U.S. officials condemned his actions as having done “grave damage” to the U.S. intelligence capabilities.[19] Snowden has defended his leaks as an effort “to inform the public as to that which is done in their name and that which is done against them.”[20] His disclosures have fueled debates over mass surveillance, government secrecy, and the balance between national security and information privacy.

One man’s espionage is another mans freedom fighter- or, in recent cases, whistleblower. Part of the problem in this country that was formed via an insurrection by revolutionaries- is that the founding fathers wanted it to be ok for the general masses to take on the government, with weapons if need be (however at that point- they were only concerned with muskets- not nuclear bombs). President Woodrow Wilson asked for some new tools to keep folks in line:

President Woodrow Wilson, in his December 7, 1915 State of the Union address, asked Congress for the legislation:[4]

There are citizens of the United States, I blush to admit, born under other flags but welcomed under our generous naturalization laws to the full freedom and opportunity of America, who have poured the poison of disloyalty into the very arteries of our national life; who have sought to bring the authority and good name of our Government into contempt, to destroy our industries wherever they thought it effective for their vindictive purposes to strike at them, and to debase our politics to the uses of foreign intrigue … I urge you to enact such laws at the earliest possible moment and feel that in doing so I am urging you to do nothing less than save the honor and self-respect of the nation. Such creatures of passion, disloyalty, and anarchy must be crushed out. They are not many, but they are infinitely malignant, and the hand of our power should close over them at once. They have formed plots to destroy property, they have entered into conspiracies against the neutrality of the Government, they have sought to pry into every confidential transaction of the Government in order to serve interests alien to our own. It is possible to deal with these things very effectually. I need not suggest the terms in which they may be dealt with.

This law has been questioned as some of it negates the protections of the hallowed 1st Amendment- our freedom of speech.

Now, let’s discuss what you and I generally can and can’t say- and this is where a famous legal quote comes in:

“Shouting fire in a crowded theater” is a popular analogy for speech or actions made for the principal purpose of creating panic. The phrase is a paraphrasing of Justice Oliver Wendell Holmes, Jr.‘s opinion in the United States Supreme Court case Schenck v. United States in 1919, which held that the defendant’s speech in opposition to the draft during World War I was not protected free speech under the First Amendment of the United States Constitution. The case was later partially overturned by Brandenburg v. Ohio in 1969, which limited the scope of banned speech to that which would be directed to and likely to incite imminent lawless action (e.g. a riot).[1]

The paraphrasing differs from Holmes’s original wording in that it typically does not include the word falsely, while also adding the word “crowded” to describe the theater.[2] The original wording used in Holmes’s opinion (“falsely shouting fire in a theater and causing a panic”) highlights that speech that is dangerous and false is not protected, as opposed to speech that is dangerous but also true.

Which brings us to President Donald Trump and his refusal to accept the election results, to deny President elect Joe Biden with security briefing material, access to transition processes and the defense of his actions by members of Congress who failed to remove Trump from office via impeachment earlier in his tenure.

Trump has been inciting riots across our country for the last two years, dividing us, causing instability and a broad mistrust of institutions that this country has relied on to keep democracy functioning- like the freedom of the press (which he contends generates fake news) and his creation of a false narrative about an imaginary force he calls “Antifa” as if being anti-fascist is a bad thing. And, then, there’s the mishandling of the Coronavirus.

Despite knowing of its danger, and that wearing a mask can help subvert it’s transmission, Trump has continuously pushed for a false narrative, that it would disappear by Easter, that various drugs and potions would work and that masks weren’t necessary. The net result is that, to date, in less than 10 months, we’ve lost almost half as many Americans as died in WWII over four years.

So far the Covid death toll in America is surpassing 248,000 and rising faster daily. If this isn’t equal to  “Treason against the United States, shall consist only in levying War against them” or by the words of Wilson, “who have poured the poison of disloyalty into the very arteries of our national life; who have sought to bring the authority and good name of our Government into contempt, to destroy our industries wherever they thought it effective for their vindictive purposes to strike at them, and to debase our politics to the uses of foreign intrigue” which fully fits how Trump has maligned our democratic processes and protections that are guaranteed by the constitution and promised with the words of the Declaration of Independence “that all men are created equal, that they are endowed by their Creator with certain unalienable Rights, that among these are Life, Liberty and the pursuit of Happiness” I don’t know what is.

It’s time for Trump’s immediate removal from office, along with his supporters who have ignored the will of the people, who have allowed this miscreant to bend our society to the point of civil unrest, egging on an insurrection and acting with impunity to the risk of our great nation. By failing to acknowledge the will of the people, for failing to concede as 44 other presidents have done before him, for his mocking of the rule of law, he must not be allowed to continue to mock us with his abuses of power and those of his backers. It is time to use the constitutional definition of treason, to use the espionage laws to their fullest extent to protect the peaceful transition of power, and to show respect not only for the office of president, but the process that bestows the powers and principles of this country into the office that Trump has besmirched.

If there was a time to hang an American for levying war against our citizens, it is today, as 248,000 have died and many will continue to die, because of Trump’s treason.

note: After I wrote this, I searched for an image and found that USA Today published an editorial asking the same thing- is Trump guilty of Treason. Because in Dayton, it takes a herd to be heard, I thought I’d include this, so you can’t say here goes Esrati off the deep end again. The reality is, our country has to regain it’s senses, fast. Before he starts another war.