Back around 1997-98 I had my first bout with kidney stones. I don’t remember if my friend Audra Huelsman drove me to Miami Valley Hospital ER- or was the one that picked me up, but going in I could barely stand up. I remember lying on the gurney tucked into the fetal position. They gave me a shot in my butt- without telling me what it was. 10 minutes later I could dance right out of there. Welcome to my first experience with morphine. Now I knew how guys in WWII stormed machine gun nests despite being shot 5 times.

I started feeling like I had lost my “energy” around 2000. I went to my family doctor, I went to another. I started dating a girl in Cincinnati- who recommended me to a guy who specializes in cholesterol. He found that my triglycerides were at 1200 (normal is under 100) and started me on some meds to put that in check. I felt a little better, but I still didn’t feel like myself.

After eating, I’d often get tired- or feel a wave of depression. I started having reflux, and felt that eating more would help it go down. I’d have a pain in my lower, right side- toward the back. I wondered if it was my gall bladder, appendix or later my adrenal gland. In the last year, my memory seemed to be not as sharp- I found myself hunting for words.

Last September, I went to the hospital again for kidney stones. This time, they weren’t coming out without help. I had surgery to break them up- and a stent put in, and then a second minor procedure to take the stent out. I was sent to an endocrinologist for the first time. He ran tests. Vitamin D was low, calcium was high, PTH- the parathyroid hormone was elevated. He did more tests. 2 biopsies, 2 nuclear scans, multiple ultrasounds. He thought is might be my parathyroid, but wanted to be sure.

I didn’t even know what a parathyroid was, or what it did before that. A friend, Jen Alexander, pointed me to the website of a doctor in Florida who runs an assembly line for removal of parathyroid glands. Reading that site, www.parathyroid.com I learned more than I could ever need to know. There was no need for more tests- it just had to come out.

My grandfather, who was an MD, used to poke at my neck when I was 12 or so- wondering about my thyroid. My grandmother had had hers removed with radiation in 1948- when they were in the first stages of using all the new-found nuclear toys to do new things in medicine. All of my life I’d heard about the thyroid- but never the parathyroid. The parathyroid is actually four small glands that are supposed to be the size of grains of rice that sit on the thyroid- right next to your vocal cords. They are supposed to regulate calcium in your body. When one goes crazy and starts producing too much hormone, the others go dormant. Your body starts sucking the calcium out of your bones- and often times, makes kidney stones. But it also can do all kinds of other things- like be misdiagnosed as fibromyalgia among other things. 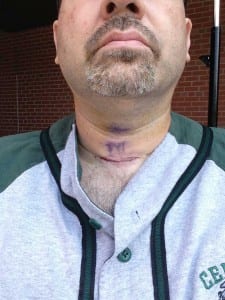 On leaving the hospital, the purple was marking the surgery- the scar below is the parathyroid scar.

Then came a few delays in scheduling which were frustrating me no end. Falling asleep while reading, feeling sore and stiff when waking up, all these things were driving me nuts. Never mind the recurrent kidney stones.

Yesterday, around 8:30am I went under the knife at the Cincinnati VA by Dr. David Steward, and got at least 1 oversized parathyroid removed. I have a scar at the base of my neck that follows a fold. The stitches are all internal- and there is a clear glue protective coating on it. It looks like someone tried to garrote me with piano wire- and didn’t finish the job.

My neck and throat were sore as I left the hospital around 1 p.m. They were still sore today- although it’s getting better by the hour. But the way I feel is magical. The haze that hung over me, the feelings of depression and tiredness are gone. I feel a clarity again that I’ve missed for so long, it’s as if I’ve been given a whole new life.

To think that I’ve spent the last 13 years thinking this was just because I was getting old, is a little bit depressing. I’ve always reminded people that doctors are “practicing” medicine – as in they still haven’t got it perfected, but right now- despite being sore, I feel like a gazillion bucks comparatively.

If you’ve had kidney stones, or if you’ve felt like you’ve had a loss in energy, or feel depressed after eating- I highly recommend you do a little research and have your PTH, calcium and vitamin D checked. Apparently, parathyroid disorders often go misdiagnosed for years.

@Bubba- I’m still taking it easy- but feeling great. As to feeling old- at least I’ll always look younger than you.

Hope you’re having a great birthday!

[…] actually felt like a slacker this week- since I’ve had to rest to recuperate from my surgery, but, I’ve not gotten any calls for replacement nets […]

The dirty little secret of the VA: failures in government contracting

[…] time a VA contractor has screwed up. Last year, when it was determined that I needed to have my parathyroid gland removed, after months of unnecessary tests including 2 needle biopsies and 2 radioactive scans- despite […]

Interesting story thst mimicks mine. I only lost 6 good years and I’m pretty bitter. I’m grateful every day for those damn kidney stones.. Otherwise I’d probably still be being treated for depression…. Think of the many, many people who are currently doing just that?! For women, they are told it’s just menopause & aging. It’s a shame. Screening should be done by psychiatrists, nephrologists, urologists, dermatologists, dentists, etc… By the time it was all said and done, there wasn’t a major system in my body that wasn’t affected.

Anyways… I’m in an online support group now for this and the general consensus is that there is permanent damage done to our bodies. I am one year post-op and dealing with another issue (a pituitary tumor) so I can’t honestly say if I’m cured. But I did feel much better after surgery!

MN girl- I’m doing fine now- although the endocrinologist is convinced he has to reduce the calcium in my urine- and has tried all kinds of medications that made me feel horrible.
I’m still making stones- but, I can live with that.
3 years after the surgery- and I’m still not sure my energy levels or my metabolism is right- but- it is better than before.
Thanks for commenting- you may want to add a link to the online support group.

We are going through this right now with our 15 year old daughter. Three years ago she had a kidney stone. She was referred to a nephrologist, and that was when we became aware of her primary hyperparathyroidism. The doctors strategy was to take a wait and see approach. He referred us to an endocrinologist who either misdiagnosed her or read her chart wrong. We did more research and learned that surgery is the only way to treat the disease.  Our daughter is scheduled to have a minimally invasive radioguided parathyroidectomy November 15th. We’re taking her to the place in Tampa you mentioned.

Needless to say the past three years have been difficult for her physically and mentally. And it didn’t need to be this way. We blame ourselves for not learning more about this disease earlier. We put our trust in the doctors taking care of her, and that they would treat her appropriately.  Boy were we wrong. I have ZERO confidence in Dayton Children’s for treating this disease.

Our doctor in Tampa is absolutely appalled over the care she received over the last three years. In addition to the the two specialists she’s also seen her pediatrician, a sports medicine specialist, and a foot/ankle orthopedist, and none of them thought that her pHPT was a concern. We’re thankful she’s finally getting the care she needs.

I know this is an older post, but I live near Dayton also, and have just been tested as having elevated calcium and parathyroid hormone. I don’t really want to go to Florida for surgery, do you David or anyone else recommend anyone in Dayton, Columbus, or Cincinnati for treatment?

Hi Patty, Dr. Steward in Cincinnati does a lot of these. He’s only on contract with the VA. I can’t vouch for anyone else.

Dr. John Phay in Columbus and Dr. David Steward in Cincinnati Ohio are the best parathyroid surgeons in Ohio, in my opinion.

Sorry I’m late to the party. I just had this surgery 2 weeks ago. David, I’m looking at your post-surgery photo and notice a bruise below the chin. It’s not a scar, but I have the same and confirmed there are stitches under that skin. It gives me trouble swallowing and my vocals are not the same. Did your doctor tell you anything about that area and the bruising?

@Lisa- you’re not late to the party. I don’t remember a whole lot of pain while swallowing – but it’s been a while. There is a risk that they nick your vocal cords- I’d heard former Cincinnati Bengals coach Sam Wyche’s distinctive gravely voice came from a botched parathyroid removal.
see this from Parathyroid.com

Complication Number One: Injury to the Recurrent Laryngeal Nerve. This graph shows the risk of injury to the nerve that controls the vocal cords. Injury to this nerve during a parathyroid operation can make the patient’s voice hoarse. Sometimes the nerve can be stretched or bruised–when this happens the voice is hoarse for a few weeks or even a few months–and then it returns to normal. Sometimes, however, the nerve is cut during the dissection needed to find or remove a parathyroid tumor–in these cases the patients voice will remain hoarse (like a whisper) for a lifetime. There are some procedures that can be done to the vocal cord (like injection of Teflon) to make it work better, but this can be a bad complication.

https://www.parathyroid.com/surgery_cure_rates.htm
I hope that info helps.