We saw snow plows in South Park yesterday. First, a neighbor with a plow did a sweep through and later, the city came through. Someone mentioned on Facebook “The City plow went up Park 4 times! How does that save the city $$$?” to which I thought- it’s not about saving the city money- it’s about clearing streets- and most of the time- one pass of a plow isn’t enough.

But, when it comes to clerks of courts- how many do we need? And how many courts do we need? Doing a background check in Montgomery County- there isn’t just one site to look up for misdemeanor criminal offenses- there is a whole slew of them. Dayton, Kettering, Oakwood (not online), Miamisburg, etc. Each with different systems- and sites.

The real question is why?

A friend is considering running for municipal judge in Columbus- and it’s a countywide race. They have one municipal court for the entire county! Imagine that? Proof that it can be done.

Of course, Franklin County probably doesn’t have near as many patronage jobs- the Dayton Clerk of Court has 59 employees- that feeds a lot of political cronies- who then sit on the party central committee.

Trying to find out the rules about Municipal Court Clerks is a bit difficult. It’s not mentioned in the city charter at all- but ruled by state law. See this webpage for all the exceptions to the rule: http://codes.ohio.gov/orc/1901.31

The Dayton Clerk of Courts position is coming up for re-election, currently held by Montgomery County Democratic Party Chair Mark Owens. The pay is around $100,000 a year- although I can’t find it online.
I’m going to take guesses at the following- if anyone can correct me, I’d appreciate it:

Note- ideally, the Board of Elections website should have the duties, qualifications, responsibilities, compensation, filing instructions, etc. on its website for every position that is elected.

I did find this document: http://www.sos.state.oh.us/SOS/Upload/publications/election/2015_CRG.pdf

Turns out the deadline passed if you are running as a major party candidate- but, in an odd case, to run as an independent, you may not need more signatures- and the deadline is later: 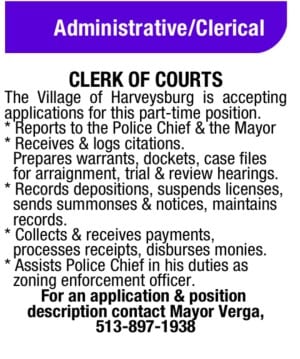 Owens is an attorney- but, I’m sure you don’t have to be one, since Dan Foley and Greg Brush are not attorneys and both have served as Clerk of Courts.

Maybe we’d have more money for snow plowing, if we had one county-wide municipal court, with one clerk, and one website.

What brought this post on was a call a week ago from Mike Bock of DaytonOS- asking why no one was challenging Owens- and a reminder in today’s paper that all communities don’t elect a clerk of courts- some hire them, like in Harveysburg.

If Ohio really wanted to have a law about term limits- (which don’t apply to local offices currently) it should be if an elected position goes more than 2 elections cycles without a challenger, the incumbent is forced out, and the position is reevaluated as an elected position.

It’s time to reevaluate a lot of how Ohio is governed, but as long as patronage mills like Clerk of Courts offices sit unchallenged- we’re pretty much doomed to maintain this expensive, duplicative, government overhead.

A number of states have gotten rid of the numerous court system fiefdoms and implemented a unified local court system. One court system that handles everything from parking tickets to capital murder cases. This has eliminated $$$ spent on having redundant management structure of clerks, administrators, and other managers. See Kansas, Minnesota, North/South Dakota, Illinois, etc. Some of these states have eliminated the elected clerk altogether with no disruption in democracy or freedom. Montgomery County has too many courts each with a separate clerk and management structure. A unified court with one clerk (even if elected) and and single probation, management, would save Millions every year.

Good work on this issue Esrati and thank you too Carl.

From a recent NPR story-

Roediger and other advocates wanted to eliminate municipal courts entirely. Similar plans have gotten pushed back in places like New York and Los Angeles, and it’s no different in Saint Louis. City leaders don’t want to lose the revenue from their courts, which can make up nearly one-third of a city’s budget. And there’s also resistance in the court system itself.