Suppose NFL owners just fired 90% of the players for refusing to stand for the National Anthem today? What would happen? Their moneymaking machine would be in a world of serious hurt. Fans would be incredibly upset, with many taking sides and dividing us even more than the old football rivalries. There would be a lot of misplaced anger, against players, owners, and our “dotard” in chief- Donald Trump.

Colin Kaepernick would still be unemployed, America would still a place where police kill citizens almost without any repercussion, and we’d still have more people in prisons than any other “free country.”

Not to mention, we’re the only industrialized country to have its citizens turn to GoFundMe when they get cancer, instead of just working with their doctors to beat it. The number one cause of bankruptcy in America is still caused by health emergencies, not bad financial decisions.

After 9/11 it became fashionable and politically popular to wear a flag pin. I did it. Veterans started to gain a new respect, long overdue, but still for the wrong reasons. We live in a country where we still allow our wars to be fought by the poor, minorities and volunteers, instead of because of universal duty. This means when those in Congress send our young people to risk their lives, few have to worry about their own children or grandchildren going to meet an uncertain future.

Donald J. Trump went to a private military academy for high school, yet, didn’t enlist. His kids didn’t enlist. Yet, here he stands, picking fights like a high school bully on an elementary school playground with a country so poor that most of its people are living in poverty, and many face food insecurity (take your pick, his country or N. Korea, unfortunately the same statement applies to both).

He blames everyone for what he sees as our problems, from Hillary Clinton and Barrack Obama to NAFTA and immigrants. Now, he’s calling Colin Kaepernick’s mom a bitch. This is not the leader of the country I stood up and swore an oath to defend, this is a mockery of it.

But, this is what happens when we, as a country, elect a game show host to the highest office. Of course, he’s questioned the validity of our journalists, our election results, and the integrity of even those he’s hired and fired in record time.

We can’t place the blame solely on Trump, there are 435 in the “House of Representatives” and 100 in the Senate, that have stood by and failed to act as a check and balance on a man so obviously unfit to be our president going back to his recorded “grab them right in the pussy” “locker room talk” and his statement that “I could stand in the middle of 5th Avenue and shoot somebody and I wouldn’t lose voters” back in January of 2016- at a campaign rally in Iowa.  Whatever happened to the “never Trump” republicans?

They sat on their hands when he blamed both sides for the violence in Charlottesville. Being a Nazi is apparently OK with this president, and even some of his Jewish cabinet. Even the idiots in Israel who preferred him over Clinton in the election sat by mute. It’s as if common sense has taken a vacation.

Now, some of the people who gave him millions, NFL owners, are twisting in their seats, hoping that they aren’t about to regret it. Because, unfortunately, in America today, it’s not about freedom, or constitutional rights, or even democracy- it’s absolutely clear, it’s only about the money. 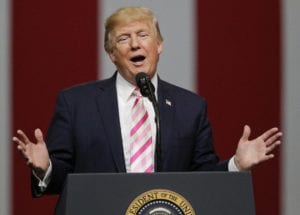 Always wrapped in the flag.

When I see a “flag” covering an entire football field as I saw at the beginning of the Browns v Colts game today, and look back at the photos of the president at the Alabama rally where he decided that those who protest are “sons of bitches”- I see the flag being used to cover for our sins instead of representing our values. And I can’t stop being reminded of how important the swastika was to the last party that rose out of hate, bigotry and powerlessness- the Nazis in Germany.

There are no winners in nuclear war, and never has this country had a president who didn’t understand this. 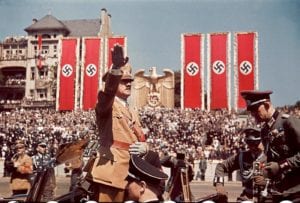 Backgrounds are important for leaders with small hands

His speech at the U. N. should have been enough for someone to raise the question of impeachment.

“No one has shown more contempt for other nations and for the wellbeing of their own people than the depraved regime in North Korea. It is responsible for the starvation deaths of millions of North Koreans, and for the imprisonment, torture, killing, and oppression of countless more… The United States has great strength and patience, but if it is forced to defend itself or its allies, we will have no choice but to totally destroy North Korea. Rocket Man is on a suicide mission for himself and for his regime.”

He even contradicts himself: “In America, we do not seek to impose our way of life on anyone, but rather to let it shine as an example for everyone to watch.” Just don’t take a knee at a football game.

How they fail to act now, is incomprehensible.

It is up to all of us, to call for an end to this madness, before his madness ends with a nuclear exclamation point. It is not OK to defend his actions, to take his side, to threaten NFL players for making a political statement.

It is patriotic to demand he leave office, and take his supporters with him. Anything less, may lead to the fall of our republic. Don’t confuse our flag, anthem or standing or sitting with patriotism. Patriotism is taking action to end the rule of this infidel.

Nice analysis. As you write, David, it’s all about the money. If the solid Republican Congress and the Republican President can’t repeal ACA, and if it can’t pass the big tax cuts for the wealthy that the Republican constituents are counting on, maybe the idea of a President Pence will start gaining traction. Trump loves opinion polls and he must be noticing that the more belligerent and racists he sounds, his poll numbers track upward. His language and tone already deserves impeachment. It sounds like he is on track to overstep what even the Republican Congress will tolerate. I’m predicting he will be out of office by spring.

I think Trump is doing a good job, I enjoy him telling it the way it is. He will be either the best or worse president, time be the victor.

David – pick a topic and deliver intelligent discourse. This buckshot article may have been cathartic for you; but, absolutely like bumper cars to us.

Is there any way we can ship Donald Trump, Kim Jong Un, the DPS board, Sheriff Phil Plummer, Rhonda Corr and Nan Whaley all to a deserted island? Someplace with no internet or cell service.

I have been reading your posts for about a year now. I appreciate that you take the DPS to task, even though the majority of the board are Democrats. This post is not as coherent as most of yours. Clearly you dislike our current president. I understand that, I struggled through the previous eight years of a communist who clearly hated our country, most of what it has accomplished, and most of her inhabitants, except for those who saw eye-to-eye with him. I was not aware of his previous position as a game show host, although he did have the Apprentice series. I watched the entire first season because I figured that would give me a good idea of who he was. I also read one his books. While he is not perfect, he is not the misogynist, racist that some have described him as (forgive me, I don’t know what a dotard is). Isn’t it interesting, that for all the research that all the people did on him (I mean digging for dirt), all that could be found was one audio recording? It is too bad that one quarter of that effort wasn’t expended on Obama during his first campaign. As far as the kneeling during the National Anthem, it’s too bad the players and coaches are taking one of the few things that actually do bring us all together, and think that they are making a statement. What is the statement? Follow Kaepernick? I am not sure that Colin knows what it is he is trying to achieve. You can read another post on the Federalist website about this situation. I just hope the President doesn’t tweet that the NFL players shouldn’t jump off a cliff (OK, that was a joke, I wouldn’t want them to die or their families to be without them). Colin’s statement after the first game that he kneeled during the National Anthem: “I am not going to stand up to show pride in a flag for a country that oppresses black people and people of color,” Kaepernick told NFL Media in an exclusive… Read more »