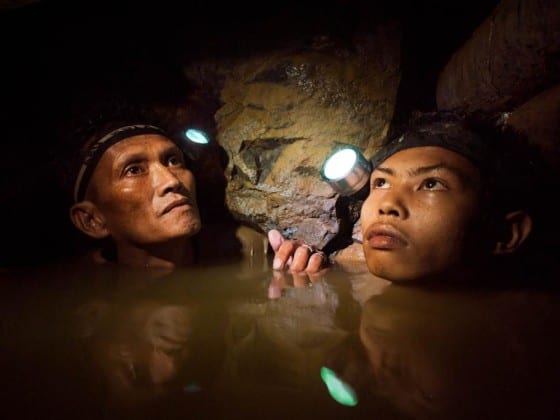 An older miner and a younger boy are chin deep in frigid water 150-meters below the surface as they work a gold mine near Syndicate on the island of Masbate. Image by Larry C. Price. Philippines, 2012.

This Friday night, June 19, Westminster Presbyterian Church, 125 N. Wilkinson St., Dayton, OH 45402 at 7 p.m., you can hear my friend Larry C. Price talk and share his amazing photographs that catalog  horrendous mining practices that bring gold to you. The event is FREE!

He’s been on assignment for the last two years in Africa, Indonesia and the Philippines, taking  photos for the Pulitzer Center on Crisis Reporting. This is the write-up for another talk on the same subject:

Larry will show work from the Philippines, Burkina Faso and Indonesia where children, some as young as four, smash boulders, haul 60-pound bags of ore, handle mercury and other toxic materials, and dive underwater into deep pits.

Although large foreign countries had mined Burkina Faso gold for almost half a century, it wasn’t until the famines of the 1980s forced families off their farms that artisanal or small-scale mining took root. Now, to maximize profits, entire families work the mines—this means putting children to work as child laborers. Gold fever shows no sign of ending.

The Philippines produced more than 1 million troy ounces of gold in 2011, ranking 18th in world production. More than half of that gold came from small-scale mines. In these mines, many of them illegal, entire families, including very young children, dig, pan, crush and haul rock. Children risk injury and death and face long-term health problems caused by back-breaking labor, exposure to dust and chemicals and, worst of all, mercury poisoning. Indonesia and the Philippines officially ban child labor, the burning of mercury and most small-scale gold mining. But in both countries, pervasive corruption, payoffs to local officials and weak central governments make it difficult to curb these practices, especially in remote areas.

The photographs are some of the most powerful you’ll ever witness. This is nothing new for Price, who has won the Pulitzer Prize twice for his reporting in war zones. To get the photos, Price crawled into dangerous mine shafts, was often submerged in water, was exposed to mercury that the miners use to identify the gold, and risked his life, to bring the story to the rest of the world.

Hope to see you there.