In the entire state of Wisconsin and Florida, there is one universal courts website. All cases, criminal, civil, probate, are managed in one place. They have one login per attorney, one set of forms, one set of fees, one set of processes- making it easy-peasy for attorneys to do their job. This also makes it easier for news organizations, background checkers, and for people who are trying to keep track of legal precedents and case law (like LexisNexis and Westlaw).

It’s also a hell of a lot more cost effective. We’ve been digging into the costs of the court websites in Montgomery County- and have gotten graceful help from some communities when we’ve filed public records requests, others have played dumb.

You can see the costs of each municipal court website on Reconstructing Dayton, our 501(c)(4) that is set up to research and then inform voters how their tax dollars and time are being wasted by unnecessary duplication and complication of and by government in Montgomery County.

You’ll see that Kettering and Miamisburg use the vendor case management system, Civica CMI from the firm of the same name in Englewood.

Oakwood, Dayton, Montgomery County Municipal, and Dayton Municipal have all been non-responsive. We’ll be filing complaints about their failure to respond to public records requests soon.

The insane thing is that none of these systems allow for online filing, or online case management and research. I just got a scan of the snail mail judgement that was mailed to my attorney in a case where a local harlot stole money from a Service Disabled Veteran that I had power of attorney for. That means anyone doing a background check, won’t find it, at least until we get the judgement recorded in Montgomery County Common pleas court. The fact that it can’t be accessed online other than a list of actions is criminal. 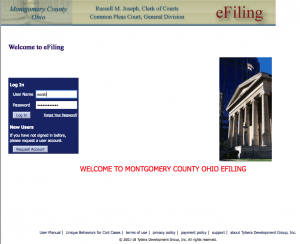 The County Clerks site is a home grown mess with its multiple domains. “ProNet” is one part and it’s efiling another, managed by Tybera out of Orem Utah, but it at least allows for online filing for civil and criminal cases, but not for probate or juvenile cases.

It’s time for a unified system in Ohio, but, we can start with working on it here. Franklin County has a single site– including their single countywide municipal court – which may be part of the reason Columbus is growing, and we’re losing congressional representation (among other things).

Which leads us to the people who “run” these courts. Mark Owens has been the Dayton Clerk of Courts since 1991. In that time, he has seen the rise of the internet, but still hasn’t made the effort to provide an efficient web filing system. Maybe, because it helps create work for the 45 patronage jobs he presides over. Mark is the godfather of the local Montgomery County Democratic Party too. He needs more people, because, well, they have to print out and mail all these documents- something that’s been done away with in the County Common Pleas court.

And, now, we’re asked to vote for his Chief Deputy Clerk, Russ Joseph, who was appointed by Mark and the Central Committee to take over the County Clerk job when Greg Brush “retired” to go work in Cincinnati for their Clerk of Courts. It helps to be an appointed incumbent running for office, even if you’ve spent 10 years not moving the Dayton Clerks office into the twentieth century. He was appointed Nov 20, 2017, he has to be on the ballot this November – and is facing Republican businessman Mike Foley, to run for the remaining 2 years of the current term.

Russ previously served with the Dayton Municipal Clerk of Court from 2004 to 2017, first as the Administrative Assistant for three years and then as Chief Deputy Clerk for 10 years. As Chief Deputy Clerk, he oversaw the office’s $3.6 million annual budget and 45 employees. This included the Clerk’s four divisions as well as administrative staff including the Chief Information Officer, Accountant and Director of Operations.

…He is also a Certified Court Manager, having completed a multi-year program through the National Center for State Courts Institute for Court Management and the Judicial College of the Ohio Supreme Court.

All that experience, and not a massive move to consolidate and simplify the clerks sites throughout the county. His site makes no promises of implementing change, just, vote for me, I’m great, and btw- here’s a list of my fundraisers and that I raised a bunch of money.

As a builder of websites, I can tell you that it would be very easy to have one integrated county wide site, even with different front ends for each municipality. We do this all the time with open source content management systems. Unfortunately, politicians with a degree in “Sociology & Bachelor of Science in Political Science with a concentration in Environmental Science” missed anything about running a business or computer science.

We’re working on a campaign to bring this issue to the forefront, not just in Montgomery County, but statewide. If you are an attorney, a bill collector, an investigative reporter or anyone else that has to interface with this horrific mishmash of bad websites and inept clerks, and would like to support forcing the simplification and consolidation of online clerks sites in Ohio, please consider making a donation to Reconstructing Dayton. Because we are a 501(c)(4) your donation can remain entirely anonymous.

It’s time to get clerks that aren’t jerks in office and doing their job effectively.

>>> We’ll be filing complaints about their failure to respond to public records requests soon.<<<

Just be aware – the law is pretty vague on any sort of deadline in getting your requests fulfilled. If I remember correctly, it only states that it has to be done in a "reasonable time", but there's no real definition of "reasonable". In general, I would think that 30 days is "reasonable". If the request is more complex, it could take more time.

Also, remember that if you request something that might not exist, the agency is under no obligation to create a "public record" that meets your request. In other words, if you request information that doesn't exist in their system or files, or you request information that would require them to compile information from multiple sources, they are not under any obligation to create a report that meets your specifications. They SHOULD give you the individual pieces of information though. And they should also – out of courtesy, not necessarily due to the law – inform you that they are unable to fulfill your request as written.

If they are paying for someone to build or maintain their website- the info is out there Bubba.
We found one Twp trustee who is also a Twp administrator in another twp. When we asked his pay- they said they don’t release that info. Sorry- but, yes you do.
We’ve asked in writing.
Next up- complaints to the State.

I hate how many courts we have. It took me forever to find which one had Lieberman’s DUI records.

Wow, Russ Joseph doesn’t have my vote. The court websites do suck yet he manages to put his own picture on the Montgomery County V2 PRO website (I hate looking at it!). Could you tell me to whom you complain when you don’t receive a response for a public record? I would appreciate it.

Hi Emily- all the local yokel court sites suck- mostly because there are so many of them. Public records requests that go unfilled- first, make sure they got it and they should have responded to you in the first 72 hours with an estimate of how long it will take.
After that- you can try the next level up of government- or the Ohio Attorney Generals office.
They all slap their photos on- which I think they should have to pay for, just because you are in a position shouldn’t give you free advertising. The Sheriff puts his name on patches- so when he leaves- they all need new patches- give me a break.
But- the real clue to why Russ Joseph needs to go, is that with all his experience- you still can’t file online in Dayton Municipal court. That’s ridiculous.