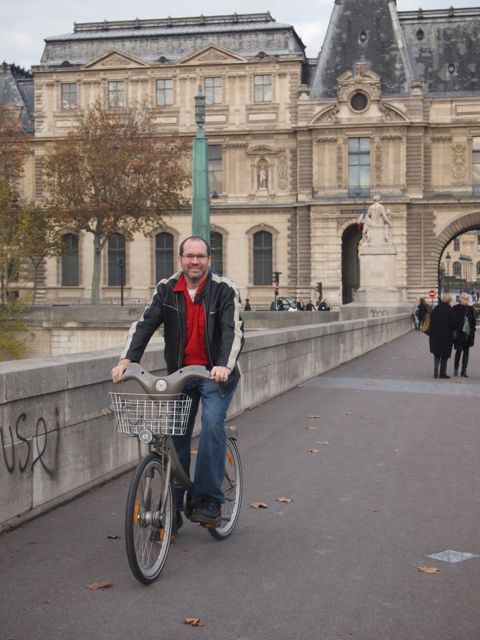 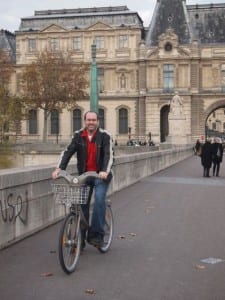 About three years ago, I started championing a bike share system for Dayton. I talked to anyone and everyone who would listen. I had the people from B-cycle ship a prototype bike to Dayton for the bike summit. I even started mapping our where we should locate the bike stations on Google Maps.

Three years ago, we could have been in the news, launching a system at the same time as Denver. We would have been on the cutting edge in North America. Total cost, between $1.5 and $3 million- to create a green technology alternative transportation system that encourages a healthy lifestyle- and solves much of our “parking problem” in downtown.

As usual, the people who think they run this city- chuckled. A few gave the idea lip service. UD launched a bike rental- which isn’t the same thing- and instead of pushing for this liberating system- the Downtown Dayton Plan pushed for kayaking on the river for a cost of at least a million more. We also had the “Steal this yellow bike” program launched downtown- which had zero economic impact.

No one needs to kayak- but, bicycling is a whole other thing- it’s transportation that works.

I know, because I pedaled all over Paris today for 1.70 euros- about $3. Pick up a bike here- drop it there. Unlimited rides for 24 hours- as long as they are under 30 minutes. I could have bought an annual pass for 29 euros- but that didn’t quite make sense with 2 days to go.

Take a bike, return it where you like, Vélib’ is a self-service bike system available 24 hours a day, all year round. To access the service, buy a 1-day or a 7-day ticket online or at any Vélib’ station or sign-up for a long-term subscription! 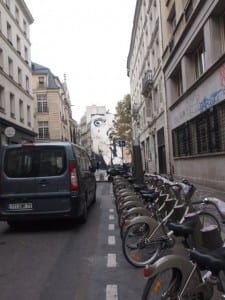 Velib Station in Paris near the Pompidou center

Compared to the Tube- it’s a much faster way to get around town. Many streets have dedicated bus/bike lanes- or even bike paths marked along narrow streets that have you riding against traffic. The bike has an adjustable height seat, lights, bell, fenders, enclosed chain and a good sized basket up front. And although you’d probably not want to lock it anywhere, choosing instead to return it to a rack- it has a lock that you can use to lock the bike anywhere.

Pull up to a station that is full- you can check in and be granted an additional 15 minutes to ride to another nearby station that has open spaces (the digital map tells you how many bikes are at each station and how many slots are open). If you have a problem with a bike- just check it back in and inform the system- the bike won’t be available until it’s been checked on).

Near popular sites, like the Louvre, there were three stations within a few blocks. The biggest problem at 10:45 was finding a place to check them in after riding from the Pompidou center. When we rode home at 4 p.m.- the station in front of our apartment building was mostly empty. The system doesn’t balance itself- and I didn’t see people moving bikes from station to station- but we did see the bikes being used all over Paris by tourists and locals alike.

Dayton Ohio could be transformed with a true bike share system. Imagine the economic impact once the 20,000 Sinclair students would have an easy way to leave campus to go to the Oregon District or Brown Street for lunch, or to visit Riverscape. What about the employees at Premier Health Partners, who often have to travel from one part of their distributed office spaces to another? Parking problems are much easier on bikes than in cars.

In London, there is a similar system- however all the bikes are advertising billboard for Barclay’s bank. I didn’t have an opportunity to try them out, as I was always with my family- and none of them are fans. The other slight problem for Yanks in London is that you really have to pay attention since you are riding on the wrong side of the street.

If RTA were really interested in providing affordable public transit, they could have implemented this system for a lot less than the money they put into both the Schuster Center (about $4 million- for bus stop improvements- because everyone going to the DPO rides the bus) and the several million they contributed to the Dragons stadium and operating the trolley system that used to provide before and after games (the stretched out golf cart trains like at King’s Island in the parking lots).

It’s time to do something significant of impact in Dayton. Bike share would fit that bill. If you don’t believe me- take a trip- you don’t have to go to Paris or London, Washington DC, NYC, Boston, Denver, Minneapolis etc. all have already taken the leap. Maybe now we can too.

David, you are so fun and so kewl! So what about the Eiffle?

David: What a kick to hear about your trip, the narrative brings me into the bike scene over there in a nice way, what a great opportunity and a door opener for the City of Dayton to be a front runner, other than that tired logo of being a “Wright Brothers Town”. The City Commission needs someone like you to bring reality to their attention and present some ideas that would benefit Dayton. I think the bike concept makes so much sense, with it being a mystery to me why the City leaders fail to grasp the Super Duper Big Picture, called logical-taste.

David, question? What is the dog park situation like over there, and what you may have seen in your world travels, which would cover dogs, dog treatment, and of course dog parks? Would you be one of the good guys and update me on your dog experience’s, maybe you can share some informational idea’s that I might be able to use when I go to our City Leaders, with my efforts towards creating Dayton’s Future Dog Park. After all chances are very good you just may be sitting on the City Commission reviewing and bringing some logical-taste to Dayton when I present my Dog Park proposal.

Enjoy each day like it is you’re next to the last one, is it too much to expect of you to do a PowerPoint of your travels for your reading audience?

I hear Nina now saying, “My son the traveler.”

@Barbara- I don’t think Dayton should try to build another Eiffel Tower- however, this time, we went to the top- it’s an amazing structure with a grand view.

@Larry- dogs in Paris are treated like people. They also seem to be much better behaved. The whole city is a dog park- although I will say I see a lot more small dogs here. People seem to pickup after their dogs as well. Makes it easy, since there are public trash “bags” at every corner (they removed all the trash cans after 9/11 fearing terrorist bombings- now there are metal hoops with a green, translucent trash bag hanging in it).

When I was on my east coast tour of the Occupations I saw a similar (or is it the same?) system in Boston.  It’s called the New Balance Hubway….

“what a great opportunity and a door opener for the City of Dayton to be a front runner, other than that tired logo of being a “Wright Brothers Town”.

…ding ding ding!  Larry wins the prize!.  Bingo!  Right on target!  The city is so close on the bike issue, they need this one last thing and it will all fit together, especially with that “Outdoor Activity” theme that we sort of see being pushed.  I do see the Wright-Brothers tie in too, due to the Wrights being bicycle builders and enthusiasts before getting into aviation.

With the program’s first 420 proposed locations unveiled on Friday, proponents say New York has taken a step toward a watershed moment in the transportation history of the city: Every few blocks throughout Midtown and Lower Manhattan, in splotches of northern Brooklyn and along a small slice of Queens, New Yorkers will have access to a new alternative for public travel.