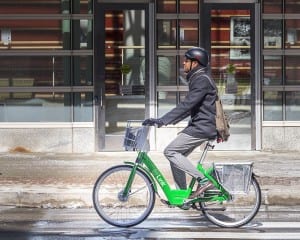 The site via Bcycle– the system vendor is live- and accepting memberships. First 100 get $10 off an annual. I’ve signed up and paid. Membership doesn’t start until you take your first ride.

The system is a training wheels one- with the bare minimum of stations and bikes. Hopefully, as the system gains riders, and fans, we’ll see additional investment and expansion.
From the site:

Link is Dayton’s bike share program. Link will provide users with a fun, safe, active mode of transportation in downtown Dayton. Link can be used for short trips and errands to get around downtown – station to station. Link will launch in May of 2015, providing downtown Dayton with 24 stations and 225 bicycles. Link is a transportation service proudly provided by Bike Miami Valley and Greater Dayton RTA.

I’m not sure if this bike is the same shade of green as the bikes that have been unveiled- but- let’s hope. I found the deep red Bcycles in DC often were hard to spot. The white Velib bikes in Paris were easy by comparison.

The system that was selected is from Trek- Bcycle, the system that I originally brought in to share at the first Miami Valley Bike Summit- back in 2009.

This blog has an entire long list of posts about why bike share is the right thing for Dayton- http://esrati.com/category/bike-share-in-dayton-ohio

Hurry and join me as one of the first 100 members!

Update- looking at the map of stations to come (and note, they are pretty easy to reposition) I’m already predicting:

If you enjoyed reading true breaking news, instead of broken news from the major media in Dayton, make sure you subscribe to this site for an email every time I post. If you wish to support this blog and independent journalism in Dayton, consider donating. All of the effort that goes into writing posts and creating videos comes directly out of my pocket, so any amount helps! Please also subscribe to the Youtube channel for notifications of every video we launch – including the livestreams.
Subscribe
8 Comments
Inline Feedbacks
View all comments

I don’t see the necessity of having a bike share station at UD Arena. For the 6 month period from April 1 until Oct 1, the vast majority of days find 5 to 7 cars in the parking lot there, most of whom drive in from the suburbs for work there in the ticket office and maintenance. Would people really use bike sharing in the winter to get to Dayton Flyer games? I doubt it.

If it was up to me, the next 6 buy sharing locations would include the Marriott, Carillon Park, the NE corner of Wayne and Wyoming, Deeds Point, Grandview Hospital, and Tech Town….my next 4 would be infill locations such as the Schuster Center, Ludlow and Fifth, the park in the Oregon District, the Cannery.

David, I know you feel 1500 bikes with say, 120 stations, would be a better way to go but it’s likely that starter system as structured will have a greater chance for success…ie…percentage of bikes being utilized, payback relative to investment, etc., than a way, way overbuilt system into neighborhoods in terrain/demographics, etc. that would be less inclined to use a bike share program.

I live fairly close to 2 of the University of Dayton stations and will likely try out a daily membership or two before committing to a year long membership.

Every city that has bike share has had ridership through the winter. To not connect the arena, the ball field and welcome stadium is short sighted. And considering it takes an hour to get out of the parking lot on game nights- bike share would be awesome.
The station at Ghostlight is close enough to Wayne and Wyoming. The rest we are in agreement on.

“Every city that has bike share has had ridership through the winter”…. That’s a false statement David….the Minneapolis bike share program shut down November 2, 2014 and is targeting an April 1, 2015 reopening. There may be other bike share systems that shut down over the winter as well but that was just one off the top of my head that I was aware of that doesn’t have winter operations.

Seriously….no way people are biking sharing to UD Arena for Flyers games in bad weather in heavy traffic…..and if would be a miracle if even one employee at UD Arena during the summers months utilized bike sharing.

Regarding my suggestion for a station at Wayne and Wyoming…. it’s a distance of .2785 miles from the Clover/Theobald station to the corner of Wayne and Wyoming….having a station at the corner of that abandoned lot provides a degree of visibility to the bike sharing program….and brings the Wayne Ave. Krogers a block walk up the hill for anyone within the bike sharing target area for anyone who might want to pick up a few groceries.

OK Matt- Minneapolis shuts down. Every other city- Denver, Paris, London, NYC, Montreal- all reduce the number of bikes- but still get riders. Maybe it’s because MN bought Bixi instead of BCycle- not sure. Maybe it’s because it’s colder than a witches tit there- and they have a great system of covered walkways.
As to putting another station at Wayne and Wyoming- there are more pressing needs. Unless you live right next to the origin station- you’ll still have to walk a distance either way with your groceries. Ghostlight is a better destination station- as is Coco’s.

The walking path from the Clover/Theobald station is just under .42 miles to the front door of the Krogers on Wayne ave…..nearly triple the distance from the station I propose at Wayne and Wyoming from the Kroger front door. That might not sound like much, but it kills the idea of carrying say 16 pounds of groceries for many. Additionally, the bike lanes along Wyoming from Wayne over to Brown St. are given a direct destination for UD students who might want to bike over for a few groceries…..something they’d be less inclined to do with an additional walk on down to the area back behind the Ghostline. It’s not a matter of it being a “better” destination or not than Ghostlight or Coco’s, but rather a matter of developing realistic options in the development of the network of stations. I believe it’s certainly a station that would get a good degree of utlization with the presence of Wendys/Krogers/Walgreens close to the corner.

From the Dayton bike share feasibility study “Stations should be no more
than 0.3 miles from each
other (~five minute walk)”

This proposed station certainly meets that criteria as an infill station. I’d be willing to bet my life that the Wayne Ave. Krogers has higher total annual sales than both the Ghostlight and Coco’s combined and is more vital impact on more people as a source for sustenance than both as well.

Come on David…get on board with this station…..After all, you want to work toward 120 stations, right?

There you go Matt- you’ve got the right ideas- go talk to Kroger and see if they will sponsor a station to bring all those UD students to Kroger. The ones that won’t ride to UD Arena. Just like the guests for the first four who might want to get to the arena on Wednesday night by bike…
Kroger should see the value- and be open to talk. I think a station and 5 bikes would run around $17,500 to $20K. Much better investment on their part than giving away gas points at a store with no gas station nearby (for the life of me, I don’t know why the city didn’t try to sell them the open lot at Wayne and Wyoming where the Ecki stood as a station…).
Question Matt- have you bought your Link pass yet?

“Question Matt-have you bought your Link pass yet?”…..I answered that question in my very first post in this thread David. In five of my lumbar of my lower back, I have degenerative discs, narrowing of my spinal canal, crushed nerve roots, and arthritis along with painful very painful sciatica down my left leg that doesn’t allow me to walk more than about a quarter of a mile tops without having to squat down for a couple of minutes to alleviate my pain to a somewhat tolerable level. Even with my physical condition and limitations, I still might make it a point to use the bike share on a semi regular basis after a trial if my body responds in kind.