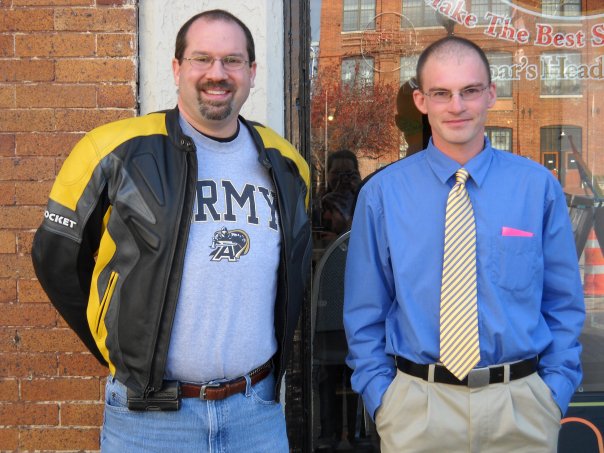 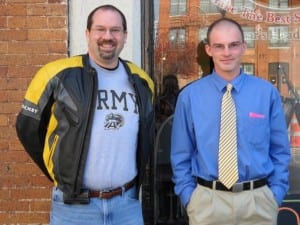 David Esrati and Ken Wade in front of Newcoms

Back in December of 2009 I wrote about a young US Army paratrooper who was going to transform our fair city of Dayton:

We listened to political neophyte (because he doesn’t want to be a politician) give an hour and 15 minute ramble on how the “real people” will bring “real results” to changing Dayton.

via Ken Wade an eternal optimist.

Citizens 4 Change came and went- as did Ken Wade, who returned to his native Arkansas, only to run for Congress.

For some odd reason- he was Ken Wade here- but now is Ken Aden in Arkansas. Here is some info from his bio:

Ken Aden, a native of Northwest Arkansas, believes it is time to put people first and politics last. He is the Democratic candidate for the Third Congressional District.

A former Staff Sergeant in the United States Army, Ken decided to run for Congress because he wants to serve his community and do his part to create jobs and revitalize the economy of the Third District.

While deployed in Iraq, Ken founded Citizens 4 Change Dayton in 2009, a non-profit founded upon the belief that people from every economic background and walk of life can come together in some small way to create for themselves a better community and neighborhood.

In 2010, following his service in the U.S. Army, Ken returned to Northwest Arkansas to help care for his grandparents and founded Residents 4 Arkansas based on the non-profit model in Ohio.

Originally from Pine Bluff and raised in Eastern Arkansas, Aden chose to pursue a career in the military after graduating high school.

During Ken’s service in the U.S. Army he was assigned to the 82nd Airborne Division and the First Infantry Division in support of combat operations.

Ken has attended the University of Chicago and Mid-South Community College. He holds an AA from Arkansas State University.

Aden is a current member of the 82nd Airborne Association, the 1st Infantry Division Association, and the Veterans of Foreign Wars.

It’s still early in his race in Arkansas, and he’s running in a Republican district against an incumbent with money in the bank. But, he’s already taken up the call of the 99%

“I am a staunch and proud supporter of the Occupy Wall Street Movement. In fact, I helped folks here in Arkansas start an Occupy chapter in the Northern part of our state. This is a true grassroots movement made up of young people, veterans, students, and folks from across the middle class just like me who are sick and tired of irresponsible corporations buying politicians of both parties while many in the government stand idly by and give corporate America the keys to the proverbial candy store. It’s truly nauseating to know that so many politicians can be so easily bought, and not even loose an ounce of sleep over the fact that they are destroying everything which we hold dear. I firmly believe that more people need to become involved, and stand up for what is right! Corporate greed is the new pandemic in this country. The ratio of CEO pay to that of the average worker is a prime example of the kind of reckless behavior that corporations in this country are exercising on a daily basis. Just look at how many politicians Koch Industries has bought over the last ten years alone. As the next congressman from Arkansas I would support an amendment to destroy the destructive influence of Citizens United. The last time I checked, corporations are NOT and will never be real people.

via DownWithTyranny!: No Democrat Has Seriously Contested Arkansas’ Third District Since Bill Clinton In 1974… Until Now. Meet Ken Aden.

During his short time in Dayton, Ken managed to rally a few people to his cause. He refused to take a political side- claiming that Citizens 4 Change wasn’t a Democrat or Republican thing, he also swore off political aspirations.

It will be interesting to see if other Dems enter the race in Arkansas, and if Ken with his youthful idealism can make it past the primary.

One of the things I find fascinating is what does the voting public really want from a political neophyte in terms of qualifications? I supported a guy in Missouri who was a West Point professor, a Rotary Scholar and a decorated veteran, working on his PhD- who was running a well funded campaign against a lame incumbent. He got annihilated in the election.

I hope Ken does better in Arkansas, and I urge any of you who remember the effort this young man made in Dayton- to consider sending him a donation to say thanks for what he tried to do here.

He’ll need all the help he can get.

Thanks for the update. I remember him well and wondered what happened to him.

I wonder why is or was using two names?

Well, the shit has hit the helicopter blades- it seems Ken has now been going around saying he was Special Forces qualified- and – a green beret in his campaign. He never said it to me- because I would have checked.
As far as I knew- when he was here- and operating as Ken Wade- he was a paratrooper with the 82nd.

All you have to do is google Ken Wade and Green Beret and you see the outing.

The DNC has a poser on it’s hands. Not good. Of course, if Tommy Sowers couldn’t win- (the guy from Missouri mentioned above)- I doubt Ken will stand a chance.

For the record- I served with SF units the entire time I was in the army. I did not complete the Q course. I did go through part of it.