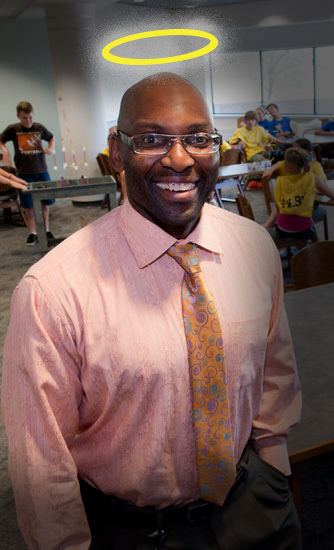 Full disclosure: David Lawrence is one of my best friends, since meeting at the YMCA over 25 years ago. I’ve posted many times before suggesting he’s the best choice to lead Dayton Public Schools for many reasons. I’ve sat on this information for a while- and am even late to publishing it as the agenda probably came out Friday. And, if you want to know why I’ve not been posting as much, you probably aren’t subscribed to my Campaign For Congress emails. Feel free to do so here: https://electesrati.com/subscribe/

Dayton Public Schools agenda for Tuesday, Sept 13, 2022 has listed “Appointment: Business Manager – D. Lawrence” on the menu. Since it’s a “Review Session” and not a “Business Meeting” which happens the following week.

Note, in their descriptions of type of meetings on their website, they don’t actually define a “Business Meeting”- which is kinda a #FAIL.

A “review session” is:

Each month, the Board is asked to approve recommendations from the superintendent and/or treasurer regarding issues such as staffing, contracts, major purchases, and curriculum. To allow the members an opportunity to gain information that will aid in their decision-making, a review session is held approximately five days before each Business Meeting.

There are no details as to the hiring of Mr. Lawrence, his pay, his duties, but we can assume two things: one, the board is hiring him directly, that he reports to them and not to the Superintendent. And two, it’s part of concerted effort to bring structure and order to the areas where Dr. Libby Lolli is an absolute failure- namely, operations. Sort of like the separation of church and state, we’re seeing the board ease Lolli out, giving her the opportunity to focus on instruction, where her team teaching model seems to be in their favor (and why wouldn’t it be? A third grader can tell you that doubling the number of teachers in grades 1-3 will get you positive results), and get a good chance to look at Lawrence as heir apparent.

Lawrence and I are similar in several ways- people either love us or hate us. There generally isn’t a middle ground. We’re also both Army Veterans. We both read, a lot. And we both love a good steak at the Pine Club.

However, there is a major difference between us- he’s the most disciplined man I know. You can tell when you look at him, 54 years old and he’ll still give a high schooler a run for his money. He works out like a machine, and I envy him for it. His name still is on the wall at Welcome Stadium for holding track records that may never be broken. He loves Fantasy Football and approaches it like a statistical Einstein. You should never bet against him in Fantasy Football. NEVER.

He started his career at Dayton Public Schools as a math teacher- something we’re still in short supply of, especially considering he’s male, and Black. He rose through the ranks at DPS being tutored in building management by Erin Dooley at Stivers as an assistant principal before being handed the new Thurgood Marshall High School where he made the unprecedented (and un-followable) progress of increasing test scores 20 points in 3 years. I visited the building while he was in command and the place was a model of learning taking place. No kids running wild, no teachers not engaged, and mutual respect at all levels. He was willing to fire a well loved winning basketball coach- because he didn’t like the life lessons being taught- and brought in a new coach who took the program to new levels.

If there are any faults to Mr. Lawrence, it’s his faith in his friends, me included. He pushed hard for LaMark Baker to be hired as head of Athletics, which ended in the fiasco of the Dunbar/Belmont game that was thrown, supposedly at Mark’s instruction, to get both teams into the playoffs. One of the stupidist, darkest things in DPS’s less than illustrious past of the last 10 years. That video, continues to be one of my highest watches on Youtube- despite the fact that I didn’t shoot it.

Lawrence claims that had he still been chief of innovation for the district at the time, instead of paid off to leave the district because he made Rhonda Corr look bad, it never would have happened.

In the time since David was paid to go away, he’s earned a PhD, making him Dr. Lawrence, and worked as an elementary school principal in Northmont, less than a mile from his home. When you’re an Elementary school principal, you don’t have to be at so many night time events- like when you are a HS principal or a superintendent was his reasoning for taking the job. And although elementary schools typically aren’t difficult to manage, the times I visited his elementary school it seemed to be running at the same high level of functionality as every other building when he was in charge. When we walked onto the playground during recess, he was mobbed by the kids. They loved him, and he loved them back. Respect.

The job description for Business Manager reads like the Board expects something similar to the second coming. They hope to wave a magic wand over the district and undo years of incompetence in so many areas. From getting the kids to school via bus, to making sure that people and vendors get paid, and that there is organization and process to follow in all manners of operation- and most importantly, to slow the continued exodus of competent experienced employees who were victims of a toxic culture caused by Lolli who is the farthest thing from a “People Person” as they come.

I don’t have any insight on how this came to happen. The board isn’t my thing right now (running for Congress will do that to you)- but, I can place a bet that Board Member Chrisondra Goodwine, a lawyer, had both her hands in this. Joe Lacey was on the board when he passed on letting Lawrence advance to the final round when they chose Corr. I’d love to hear his reasoning on why they made that epic mistake and helped shrink the district by around 5000 students.

There is no guarantee that Lawrence will become Superintendent next year when Lolli’s contract expires, and they could waste their time and money with yet another “national search” for candidates. The reality is, no one else already knows their way to every building without a GPS (it’s doubtful that a few people in the halls of the temple of administration could do that- still). He knows the political landscape, he knows the church leaders, he knows the neighborhoods- and he knows a lot of parents and graduates.

One of the hallmarks of his leadership in buildings was the number of home visits he made. He believes in that personal understanding of each and every student- and their background is critical in helping them succeed.

A long time ago, I called him “Saint David Lawrence” and while neither of us is much of a believer in “Saints” we do believe in spirit and soul of an institution. It’s camaraderie and respect and institutional knowledge that’s critical to bringing the best out in every organization. If there’s ever been a shining star on the horizon for Dayton Public Schools, this Tuesday- it will make it’s first appearance.

To quote LL Cool J, “Don’t call it a comeback” – get ready Mama, DL’s coming to knock it out of the park.

Great article. But, elementary buildings are just as much of a challenge to manage as other buildings. A different kind of challenge, but a challenge nonetheless. After all, we set the foundation for what middle and high school must build upon. Welcome back Mr. Lawrence. He gave me my first name tag with “principal” on it.

Wonderful article, David!…………and I was SO happy to hear this about “the other David”! : ) I met him while I was teaching at Meadowdale around 2010 and was immediately impressed with him – with his honesty, his unconventional (but noble and accurate beliefs, his energy, his focus on staying “present” wherever he was and with whomever he interacted, his easy approachability, his commitment to students and to excellence……..and I could go on. Just let me say that YOU, David Esrati, just went up another notch in my estimation, when you said you and he are friends! To me, that means one thing: you both are beings of character, something we see way too little of these days! Please pass along my well wishes to him … you both try to make everything you touch, BETTER!

And once again, the Dayton Daily reads it here first- writes it later- and doesn’t give credit. https://www.daytondailynews.com/local/dayton-school-board-considers-hiring-former-administrator-in-new-position/GJCXKNOAKZHQRAL5E2E5WLB4RU/

David, you are a cancer on our society. This corrupt got everything he had because he was black criminal shows how stupid you are. So sad the final solution for Dayton is deporting blacks so KKK white liberals can regain the city. Stop what you are doing and go away. A village somewhere is missing and idiot.