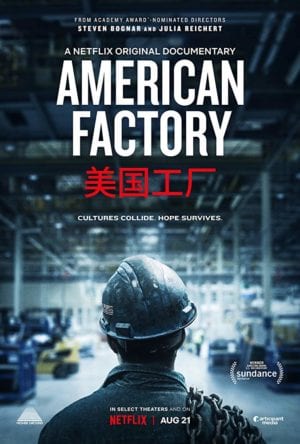 [1]Julia Reichert and Steven Bognar are the real deal when it comes to making documentaries. They are one of Dayton Ohio’s true gems. Thoughtful, inquisitive and deliberate, they approach their stories with a very cool journalists eye. While their movies don’t enjoy great box office success (very few documentaries do) the stories they tell are infinitely more important than the latest Hollywood blockbuster.

It’s probably why this film, “American Factory” [2] was the first one backed by the Obama’s new production company, Higher Ground Productions. It’s also coming to Netflix this Wednesday – which means it’s going to put Dayton Ohio back in the global spotlight for a shooting- but this one was a movie that took four years to make, vs the other shooting that took less than a minute.

Like the dirty little secret [3] of how this plant is the only reason that a “city” exists in Ohio- with only 6000 people- and an elected Mayor and Council, a city manager, a fire chief etc- Moraine Ohio almost ceased to exist while the plant was in limbo- and should never have existed in the first place. When will the 6000 people realize that they all shouldn’t have to pay for a city manager who makes $145K a year, that’s about $23 a head per year- to “run” their 9.52 square miles.

From incentives and tax breaks, John Kasich and his “Jobs Ohio” program threw cash at a Chinese billionaire to bring $13 an hour jobs back to a plant that used to pay $30 an hour. That’s the story that this movie didn’t tell. It also didn’t tell how the State let GM “donate” the plant to them, so they could “donate” it to Industrial Realty Group [4] out of California who is a vulture developer. IRG, led by Stuart Lichter, worked with JobsOhio and Moraine officials in selling Fuyao Chairman Cho Tak Wong the plant in 2013 after Lichter had scrapped the assembly line and paint facility that the tax payers had built for GM on the promise of keeping the plant open.