Do your neighbors get together and throw together a play? And not just any play- Shakespeare?

Didn’t think so. Not only that- do they invite the world to see it for FREE?

Yep- you can do that tonight, tomorrow and Sunday nights-

You can park in Emerson School lot, or Hope Lutheran lot- or on the street. 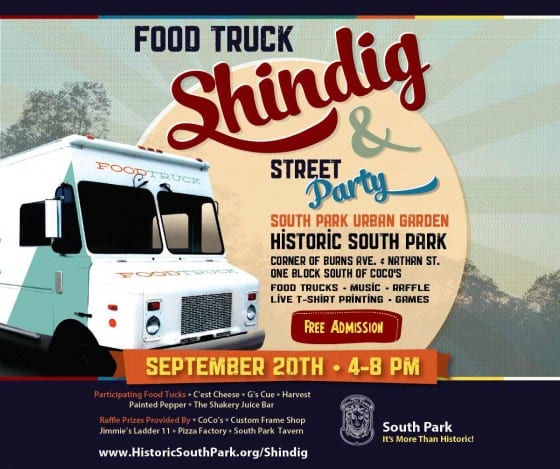 First the Bard, then the lard- gourmet chefs on the go come to South Park

Yep, we have our own food truck Shindig & Street party on Friday Sept 20th from 4-8pm. The party will be down at Burns and Nathan one block South of Coco’s. We’ll have trucks, tunes, t-shirts and more- and the event is free, even though the food isn’t.

These community initiatives are one of the reasons why South Park’s property taxes go up. Come see what the neighborhood you wished you lived in does to keep things interesting.

Check out www.historicsouthpark.org [2] for info on events, rentals, homes for sale and what makes South Park the best neighborhood in the State of Ohio, and a National Neighborhood of the year winner. The site, btw, is hosted pro-bono by The Next Wave [3], Dayton’s greatest and finest ad agency, which has its global HQ in South Park.

Note, both these fabulous posters were done by other fabulously talented South Park residents.

If you enjoyed this post, make sure you subscribe to my RSS feed [4]! If you wish to support this blog and independent journalism in Dayton, consider donating [5]. All of the effort that goes into writing posts and creating videos comes directly out of my pocket, so any amount helps!
Subscribe
0 Comments
Inline Feedbacks
View all comments