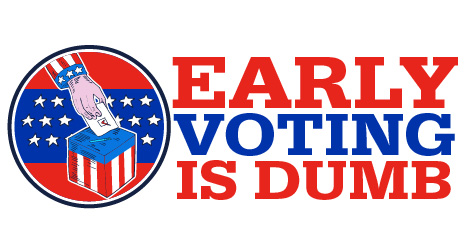 [1]Souls to the polls, where churches bus people to the voting booth after church weeks before the election are a strategy GOTV people love.
Wait, you don’t know what GOTV is? Get Out The Vote has traditionally been a strength of the Democratic party- which is also a fan of slate cards- printed lists of “Endorsed candidates” or as I like to call them “stupid voter cards.” Why do I call them “stupid voter cards”? Because there was once a black judicial candidate who had tried to run as a Democrat, but hadn’t kissed the party bosses ring. So he ran as an Republican, but in Ohio, judges don’t get to have their party affiliation on the ballot- since they are supposed to be impartial. On election day, he had slate cards printed for the West side of Dayton, which is predominantly black, with his photo, along side all the “Endorsed Candidates” which was the rest of the Dem party ticket. He had his people handing them out at the polls.

On the white East side, he just had his name, no photo- along side the dem ticket. He won. The party cried foul, but by that time it was too late.

Uninformed voters are the parties best soldiers. Ones that voter early, are ones they don’t have to worry about on election day.

The reason they love early voting is because of logistics. The more people who vote early, the less you have to round up and drive to the polls on election day. In Ohio, each polling place posts a list of who has voted as of 11 am, and at 4 pm- giving the GOTV people time to check off their lists, and then to start calling on the ones they think they can count on to vote their way- and get them into the polls. This is the machine that has worked in Dem strongholds for years- it’s where organized labor comes in handy. It’s where the rubber meets the polls.

But, there is another reason early voting is uniformed voting. In this presidential cycle, you might have cast a vote for Donald Trump- before you herd that he thought it was ok to “grab them right by the pussy” [2]  or locally, voted for Issue 9 in Dayton- without knowing who had contributed all the money to the campaign to raise your taxes. [3]

There is also the fact that in Ohio, once you cast your early ballot, you can’t change it- like in some other states.

Among the states that do allow voters to change their early ballot after it’s been cast are: Wisconsin; Minnesota; Michigan; Pennsylvania; New York; Connecticut; and Mississippi.

Source: Want to change your vote? Some states say no problem – CNNPolitics.com [4]

There’s also the dirty tricks reaction- at the last minute, a candidate you voted for, may send out a mailer calling their opponent a pedophile [5]. Nah, that wouldn’t happen would it? Well, in a Montgomery County State Rep race, it actually happened well before you went to the polls, making incumbent right wing jerk Jeff Rezabek look like a grade school bully with twisted tendencies – although he claimed he had nothing to do with it.

Or when the FBI director decides to restart the crazy train about Hillary Clinton’s email server less than 2 weeks before the election. Or when Donald Trump….

Early voting is only a tool to heard lazy uniformed voters who will vote your ticket into your corner. There is no reason for it to replace the old absentee ballot for those who may not be home on election day, or are serving overseas, or could be hospitalized. And, in reality, with the new law in Ohio allowing you to now take selfies of your ballot- it’s an opportunity to pay people for votes. Of course THAT never ever happens… right….. want to buy a bridge in Brooklyn?

The real answer to “early voting” is vote by mail- for everyone. Not only does it help prop up the post office, it gives people the ability to actually take time and research each candidate and issue at their leisure. It’s been the way Oregon votes for years.

Our main problem in this country isn’t voter fraud- it’s fraudulent candidates. We never know what they really stand for, or what’s coming out of their mouths next. There are truth in advertising laws with legal repercussions- but there are no truth in campaigning laws with teeth.

So if you’ve already early voted- I hope you feel good about saving someone some time and money trying to round you up like lemmings to vote their way. Me personally, I wait to the day of, and make sure I know exactly what and why I cast each ballot.

If you enjoyed this post, make sure you subscribe to my RSS feed [6]! If you wish to support this blog and independent journalism in Dayton, consider donating [7]. All of the effort that goes into writing posts and creating videos comes directly out of my pocket, so any amount helps!
Subscribe
2 Comments
Inline Feedbacks
View all comments

It’s “herd” when you’re rounding up cattle (or voters).