Pre-General campaign finance reports were due today, and of course, in modern American politics, we handicap politicians by their fundraising.

So, if dollars are votes, here’s the election results (vote for 2, 2 seats available). The Campaign finance reports are “enhanced” as best can be, to be semi-ADA compliant by me- and documents straightened. Shaw doesn’t know how to use a computer- so it’s all handwritten).

Now, it was never my goal to buy my way into office, nor was it to paint a target on my back. Had I raised a ton of money, or threatened them more- you’d see them raising more and spending more. The big money went to Chris because the powers that be are terrified that Shenise might beat him and actually have a spine on the commission. Their calculations don’t include me. I came in 4th in the primary – and nowhere close to the incumbents. Shenise was in spitting distance of Chris- hence the money.

They figure Matt is safe- but, he still needed money to feed the machine.

Now, in terms of who the big buyer of the City Commissioners is this cycle- the blue ribbon goes to Larry Connor- of The Connor Group. He’s the guy who owns lots of apartment buildings in nice parts of cities all over the country- just none in Dayton. But, he does have his HQ and his private hanger on the land at Dayton South Airport. He gave $2500 to EACH of them. One donor, $5,000.

Who buys your incumbents? Mostly Union Political Action Committees, people who do business with the city, developers, other politicians, city hall lifers, patronage job holders.
I’m going to highlight anyone over $500 for Chris Shaw- only because I hate typing so much.

Matt Joseph, Donations over $500 (it’s easier- I can just copy and paste from Chris- and change a few amounts)

Matt Joseph spent a lot of money with JM2 [5]– a Columbus based consultant who describes his 2 person 1 dog shop as “JM2 is a political mail consulting agency dedicated to electing Democrats, promoting progressive causes, and serving as a communications guide for like-minded organizations. We are more than just your mail vendor. We are a strategic member of your campaign.” He gives a bunch of money to the Dem Party- which is a way to pay for postage.

The incumbents also get to play around with postage rates- qualifying as a non-profit and using the State Democratic Party rates. This saves about 10 cents per piece. Shenise and I, although we’re both Dems- don’t get to use the non-profit rate. JM2 is responsible for the nearly identical but different mailings that went out to Daytonian’s based on what race they were [6].

Chris Shaw also pays JM2 and the party. He spent about $30 on “Facebook adds” which makes me laugh. 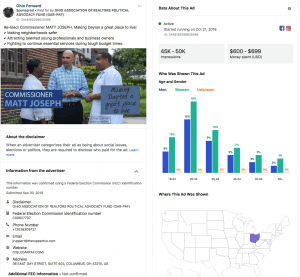 Sadly, Matt went to an amateur for his online ads. Click for larger view

Both of the incumbents seem to be letting the Realtors do their online marketing- via the Realtor’s PAC- with a last minute setup (Sep 30 2019) page called Ohio Forward that backs both of them with not only horrible ads, but really bad targeting [8].

Compare my much smaller, focused spend on an actual ad- a video. 75 Shares, 80 comments, 10,000 plus views and climbing. Lots of comments. Finding the ads run by Matt and Chris is harder- but- if you see one- put the shares down…. I bet it’s less than 10. 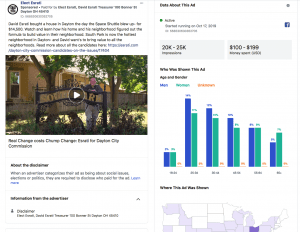 Click to see larger. Spent less, got more- for a real ad- a video.

When it comes to Shenise’s expenses a bunch of you might be wondering why she’s paying The Next Wave, my firm. It’s because she went with a local business, instead of one in Columbus. One that had helped Darryl Fairchild beat the party endorsed Daryl Ward for the seat that Joey Williams was forced to resign from. We built her website, which has actual content, took her portraits, designed her logo, printed her signs, t-shirts, printed her hotcards- all for a fraction of what Matt and Chris spent. We also did her video, which if you haven’t seen it- is something I’m very proud of.

Sadly, Chris and Matt don’t have a video. They don’t show up at neighborhood meetings. But, when they do show up at candidates forums, they don’t really say anything. Maybe it’s because the people that bought them never bothered to give them a script?

I’m proud of the work I did for Darryl Fairschild too. Maybe you should watch it too. The message still is relevant to this campaign.

And, in case you’re wondering what’s going to show up in some of your mailboxes soon, I’ve got a mailer coming out that showcases how you’re being played by these folks- and what real, bottom up economic development looks like (Free RTA). 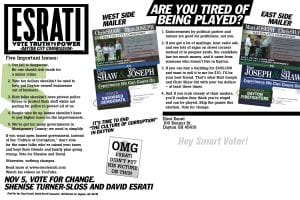 Coming to a household near you 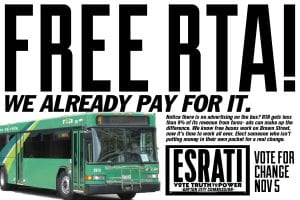 Yes, David Esrati wants to do some economic development that helps poor folks, not just rich developers from out of town.

So, if you’re curious to find out more about Shenise go to her professional website at www.shenisefordayton.com [12] you can donate there.
You’re already on my long running blog, but if you want to donate, www.electesrati.com/donate [13]

Or if you want to go check out Matt Joseph and Chris Shaw- who say absolutely nothing on their sites other than talk about themselves and ask for money:

And last but not least, you can visit my YouTube page [16], where I have videos of candidates nights, neighborhood meetings and videos exposing the culture of corruption in Dayton.

And if you want the 15 minute campaign pitch to end all pitches, watch this:

If you enjoyed this post, make sure you subscribe to my RSS feed [17]! If you wish to support this blog and independent journalism in Dayton, consider donating [18]. All of the effort that goes into writing posts and creating videos comes directly out of my pocket, so any amount helps!
Subscribe
5 Comments
Inline Feedbacks
View all comments

Welcome “Silence”- which used to be golden…
Well, no worse than Mike Turner raising a million and spending quite a bit with his wife.
Who should I spend it with? Considering I own the best ad agency for political work in Dayton, can buy printing at cost, know how to run Facebook ads- build websites?
Oh, and btw- I have employees- who I pay- isn’t that like the “Job Creation” Matt and Chris keep talking about?
Waiting for your answer?

You are well known for doing your research. I live in a red lined area of Dayton and have received at least 3 mailers from Shaw and Joseph neither of whom I’ve ever supported. There are so many voting who are tired of the machine and are listening – a good sign.

This litany of rascals financing Shaw is alarming. There’s Phil Parker, the Chamber hack. Parker pontificates in a space on the Sunday DDN and ordinarily avoids writing on commerce or honest business matters. As a matter of fact, the black community should be curious why shaw would take money from Parker. He, Paul Leonard and Dan Foley tried to all but eliminate urban involvement when they tried to consolidate the entire Valley. and, when Foward appeared with them on Otte’s sunday show, they were condescending and insulting to the NAACP leader. Yet Shaw pockets the guy’s money no matter. AND, just to be sure Shaw remembers how to vote, there’s the Friends of Nan Whaley. Most every contributor on the list has an obvious self-serving methods for kicking in to Shaw’s coffer.
LASTLY, to the posting by Slience dogood – to what should be a low budget, minimally financed … candidates try to stretch their contributions by buying signs, supplies, etc themselves. They keep a spreadsheet of those accumulated costs, buy out of their personal monies > then settle up by the campaign funds paying the accumulated expense. Just thought you might like to know, instead of grasping to slap on a nasty remark.

Hi David,
Per LinkedIn job postings the Conner Group plans to open a school in downtown Dayton in 2021. Any commissioners who took money from them should recuse themselves from all commission decisions concerning the school, its property, etc.