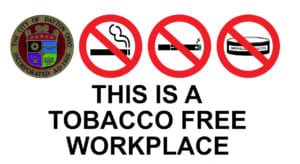 [1]What do you do when you are facing indictment and going to be hauled off in shackles?

Take a play out of the Trump playbook and keep the public talking about everything except the fact that you’ve been robbing them blind for years with pay-to-play schemes and increasing taxes while decreasing services. That’s the only explanation for the latest move by the doomed captains of corruption, Nan Whaley, Shelley Dickstein and their flunkies Jeff Mims, Chris Shaw and Matt Joseph.

Now they want to distract us with a no tobacco policy for future hires, with random invasive tests [2].

Yes, the city of Dayton is self-insured for health insurance and spending at least $12.4M a year to cover their employees and spouses (reported to count as 2,657 adults on its insurance plan), and they claim that each smoker costs an additional $6K a year to cover, but the new plan will only apply to future hires. There has been no mention of spouses/domestic partners being included in the smoker prohibition. It’s amazing that Nan and her cronies are so worried about spending our tax dollars for health care, while they seem to have no problem buying buildings for half a million dollars each- and then giving them away to developers from out of town. It would take 75 smokers at $6000 a year to make the $450,000 they lost on the old Supply One building on Wayne.

The real problems here are twofold. First, if we had national health care these cost cutting decisions wouldn’t be in the hands of local politicians. While the democratic presidential candidates talk about “American’s choice of health insurance” -most people I know have that decision made by their employer, and then the insurer/corporate medicine chieftains ration it and charge us crazy money for simple treatments.

The second is that Dayton only has limited choices in health insurance and health care providers thanks to the duopoly of Premier Health and Kettering Health.

If we really cared about health care costs someone would have filed an anti-trust suit against these two “non-profits” who are making money hand over fist.

Want to figure out a better way to provide health care for your employees (smokers included) and save money?

First, band together with every other government jurisdiction in Montgomery County- and take the health insurance money- and employee contributions and invest in a County General Hospital. Yep, build and run a public hospital. It would have a real psychiatric ward- that would allow the mentally ill to spend time there instead of in the County Jail (which is currently our biggest mental health facility) and perhaps stop us from spending over $10M in lawsuits. Once you stop delivering 911 calls to the private hospitals except the worst cases, and take most people with simple stuff to a publicly owned Urgent Care/ER- where the cost of admission isn’t $4k for 3 stitches [3], you might start being able to negotiate real cost reductions in care. We can try to contract with the VA to buy meds at their prices- so we can actually get a decent deal instead of through the PBM middle men. We could even offer health plans to local businesses. Last person to pull this trick was Dr. Michael Ervin who set up Five Rivers Health as an alternative to UHC and Anthem, who promptly made him a very rich man to go away.

The other option is to stop pretending the “Meds” part of “Meds Eds and Feds” is a non-profit- or make them act like one. And this doesn’t only apply to hospitals, try it with every other “non-profit.” Enact a super-income tax rate of 50% or more on anyone making more than 7x their organizations median income (median because average is thrown off by $3M paychecks of CEOs, while median- not so much). It’s either submit to the hyper tax- or be faced with paying property taxes. Of course, there are people saying- well, they’ll just pass those costs along…. but, when they actually are having to compete with a publicly owned hospital, that is non-profit, they might not be in business for long.

Oh, and one other thing, if you’re a wealthy “non-profit” like Sinclair, Premier, Kettering or UD- and you want to have a private army, excuse me, “police force” that carries guns, drives cruisers indistinguishable from public police, yes, you’ll have to buy a license per officer of $65K a year (about the average pay of an actual real police officer who is accountable to elected folks- instead of a CEO). After the Samuel Dubose shooting in Cincinnati by a UC officer, [4] that should have been the end of the private cops. If Premier or UD want police officers, they can pay for DPD- just like the rest of us- through a property tax or settle with what we can afford. They don’t get to hire their own.

Too bad Mayor Whaley, Jeff Mims, Chris Shaw, Matt Joseph and Darryl Fairchild allowed a demolition permit for Good Sam, because after giving Premier a tax break all those years- we, the people, should have had a say in its destiny.

Instead, we’re getting paid hush money with a $10M promise of “redevelopment” without a plan. Funny how Premier and UD also got to “buy” the Fairgrounds for $10.4M without having to bid, or have a plan, but the two groups who did have a plan were supposed to pay $20M. This is just another part of the culture of corruption.

But, for you smokers who are worried you might not be able to get a job with the City, don’t worry, the city will spend any amount possible to keep this sideshow going, and Niraj Antani, with his hatred of the city, will launch a smoker protection bill making Ohio a tobacco friendly state. Then Nan will spend more money fighting it claiming “home rule” all while your streets don’t get swept.

As a small business owner, I can tell you that hiring smokers is a bad proposition. They take smoke breaks, they are sick more, they smell bad, and last but not least, they are smokers- which means they already aren’t smart enough to know that smoking is a bad idea. The real way to fix smoking is to tax it to death, so that smokers pay the government for their habit, and helps fund the new national health care plan that should be a no-brainer.

In the meantime, when the hell is the FBI and the DOJ going to take some of these criminals out of office? Surely, the “culture of corruption” isn’t limited to only 3 black men? Maybe we should be asking what they’ve been smoking?

It is very frustrating waiting (if forever) for Justice to Come.
The Whale knows her time is coming and the diversion you cited along with having a contest for the new Dayton flag.

Jeezzze. Like these are the only problems the city is facing.

Embarrassing.No wonder people are walking away from the Dems.

Your key sentence: “Too bad Mayor Whaley, Jeff Mims, Chris Shaw, Matt Joseph and Darryl Fairchild allowed a demolition permit for Good Sam, because after giving Premier a tax break all those years- we, the people, should have had a say in its destiny.” They should each be held accountable.

[…] awareness of PTSD- but, that was Friday night- and I’d missed it (because I was working on a post calling for a County public hospital to compete with our duopoly hospitals- which don’t…, turning our county jail into the largest psych facility in the […]