Siebenthaler and Carter Ave. Sometime last night. A little silver Honda Civic with a HOPE sticker in the back window, became the third crime to affect my household in the last 2 years. First the house was broken into in broad daylight [1], then the office in the middle of the night [2]– and now, the girlfriend’s car, while it was sitting on the street outside her parents’ home, as we had borrowed their pickup to work on the move. 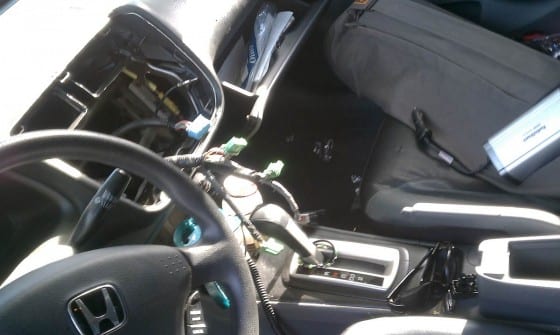 The aftermath of a break in

The stereo won’t bring more than $50. There wasn’t much else in the car to take. The most valuable item was probably the power inverter on the seat- that took 12v and made it into 110 ac. Thieves aren’t very smart. The entire dash is gone, plus the stereo- and the broken window. Probably around $1,200 damage- a $250 deductible and good business for the car dealer, the stereo maker and the window replacement guy. But, now, because some junkie needed a $50 fix- the home values in that neighborhood drop again, insurance in the neighborhood go up, and Dayton reinforces its reputation as a crime-riddled community.

In today’s DDN there is an article about our overcrowded prisons, the costs, and the number of non-violent offenders. [4] No DOH.

You almost have to wonder how stupid can we be? Other than the difficulty of getting high in prison- and the risk of being sexually assaulted- room and board and health care, may be a better option than a homeless shelter or living on the streets.

We’ve got to have meaningful, living-wage jobs in this country for all, or we’ll end up looking more like “Escape from New York” than hot dogs, apple pie and Chevrolet. If people want to get high- and waste their lives, their brains, their bodies- I’m with the libertarians- let them, and let’s tax them. We can put in provisions that if you buy and use drugs like heroin, meth, crack etc.- you will instantly limit your lifetime health insurance benefits- and we won’t fix your broken bodies.

But, if you just smoke weed- you’ll be paying taxes to help pay for health care for all- just like the taxes on booze and smokes. Because face it- it would have been cheaper to give this crack head thief a hit- than to fix the damage he caused in pursuit of his high.

Yep, I’m running for Congress and I think the “War on Drugs” is a desperate war on the desperate. I’d rather focus on full employment, education, first-class public infrastructure (including trains and public transit) than a hallucination that we can stop people from getting high on legal or illegal substances.

We may as well try to stop people from having sex. Or is that next?

If you enjoyed this post, make sure you subscribe to my RSS feed [5]! If you wish to support this blog and independent journalism in Dayton, consider donating [6]. All of the effort that goes into writing posts and creating videos comes directly out of my pocket, so any amount helps!
Subscribe
10 Comments
Inline Feedbacks
View all comments

But I thought the Sheriff’s task force was on it?

You must remember, that the purpose of the war on drugs, is to help to indefinitely continue the war on drugs.
It’s nothing but a money racket on both sides of the coin.

Dave, the government’s position on sex used to be the mirror image of its position on drugs.  It encouraged hetrosexual monogamy and discouraged any other relations, just as it encourages tobacco, alcohol and caffeine while discouraging all other drugs.

It took legislating from the bench–in the form of the SCOTUS ruling that government has no right to intrude on consensual relations among adults performed in private–to overturn all of the nation’s anti-sodomy, anti-homosexual, anti-group-sex laws.

Alas, our current majority of SCOTUS justices are too myopic to rule that adult citizens ought to have the right to ingest whatever substances they wish, so long as the consumption doesn’t create impositions on other citizens.  Maybe in the next six years Obama will get the openings to replace, say, Opus Dei Scalia or No Talk Thomas and we’ll see a chance at progressive judiciating again.

Well, that really sucks… but the truth is some neighborhoods you could leave your car there for a week, other neighborhoods… not more than ten minutes… the difference isn’t how many cops or how they patrol, it’s just that nobody has organized… really organized that neighborhood against crime and the stats scream it… it still comes down to the residents being educated and taking responsibility for their area rather than pulling the curtains closed and looking away, government can’t fix what people won’t do for themselves.

Hmmmm…. there is a connection.

And- note, there was some exterior paint damage too- the estimated cost could be higher.

I’ve heard that Mike Ervin in the Oregon District pays someone to watch his car overnight.  Guess when you can afford to renovate an old bar into a $1.6 million home, you can also afford a guard for your car.

I knew there was something missing in the lilly-while Great in Dayton video.

As for the Ervins, they collaborated with Richard Florida.

Maybe in the next six years Obama will get the openings to replace, say, Opus Dei Scalia or No Talk Thomas and we’ll see a chance at progressive judiciating again. (truddick)
Six more years? Wishful thinking? Clairvoyance? Delirium? Better have that crystal ball recalibrated dear truddick, for the Old Bandito’s tea leaves are pointing towards Jimmy Carter redux….

Cool and Thought Provoking video on our endless “war”
http://www.youtube.com/watch?v=91y9KqvVggY&feature=player_embedded

Thanks for the link John- posted about it here: http://esrati.com/war-on-drugs-fail/5202/