Sounds like a headline from The Onion [1], but unfortunately, it’s the latest volley in the folly that’s known as the Wright State University self-enrichment program for trustees and their friends- or H1B visa scandal.

If you’ve been hiding your head under a rock for the last 3 years, here’s the recap. Wright State University President David Hopkins who is universally loved, gets played by the local Military Industrial Complex and their cronies to extend the university umbrella to cover a bunch of projects/programs/initiatives to “save the base.” Next thing you know, WSU isn’t in the business of granting mediocre students degrees (WSU is open enrollment- meaning if you graduated from an Ohio High School- you are guaranteed admission), it’s a research institute and training facility for “the next generation war fighter” (cue patriotic music and wave a flag). All of this is because of the BRAC, Base Realignment And Closing act of Congress might cause “job losses at WPAFB“- which is “Ohio’s largest single location employer.” Note, anything in italics is meant to be said in your best hyperbole voice.

It doesn’t help that WSU has severe University of Dayton envy- where they run a very successful “Research institute” to gain government contracts and funding for research. Of course, a university with a pretty good engineering school that has hired top base scientists for years has the jump on Wright State. A friend of mine who taught in the Wright State engineering department used to call it “the best recruiting tool UD had.”

Hopkins puts a plan into place to build a similar structure at Wright State creating “affiliates” of the university- the Wright State Research Institute and Wright State Applied Research Corporation- and then goes to get contracts for them to “do research stuff” and “provide opportunities for Wright State students” and create “World class something or other” which was going to make Wright State a global player right behind MIT, Stanford, Georgia Tech…. and Boise State, all giants in engineering and smart folk stuff.

Instead, WSU Trustee Nina Joshi who owns a company named UES [2], and Michael Bridges who owns a company named Peerless Technologies [3], and this other local company, Lexis Nexis, and a fall guy, Vijay Vallabhaneni [4], who owns WebYoga [5] (which has the worst website I’ve seen in the last 5 years) all start hiring tech staffing at discount prices through these new, “affiliate” entities- and avoiding government regulations. Wright State adds a nice little markup on the tech folks- much like a modern day human trafficker. The program is called an H1B visa, and it is supposed to restrict the number of people who come into the USA to work from places like India and China- where they have more engineering students than we have people. Google, Microsoft, Apple, Oracle etc- fight over the allocation of these visas every year. WSU used its educational facility exemption to skirt the limits and bring in brainiacs by the boatload. The conditions for the academic exemption are that the “students” are supposed to be working for WSU and managed by WSU. This wasn’t the case. Instead, they were supposedly building a product called “SpiderXchange” for WebYoga and doing other stuff that wasn’t kosher.

When the curtain got pulled back from the scam, the university started to clean house. The President, the Provost, the Lawyer, the DealMaker, the Candlestick maker- all got ousted, while the board of Trustees got a reprimand. Nina Joshi resigned from the board – without shame. Bridges stayed on. Governor Kasich rewarded LexisNexis with a representative on the board to be privy to all these legal messes right in the middle. Sean Fitzpatrick works for LexisNexis- which is being investigated- yet, he, like Bridges, signed off on the “Non-Prosecution Agreement” tendered today by the US DOJ attorney, Benjamin Glassman [6]. How this is even allowed to happen is bewildering, but, since WSU also agreed to a gag order, no one is talking.

Now here’s the crazy part: Wright State, a state owned entity, is to pay the US Treasury a million of yours and mine tax dollars as a “fine” to make sure “Wright State” isn’t naughty again in the H1B visa space. This is to stop anyone from being a dirty rotten slave trader of tech workers. Oh, and we may still prosecute some of those people in the future…. but we won’t say who.

Remind me how this happened? Was it the Wright State students who came up with this scam? Or was it the taxpayer of Ohio? Because, last I checked, while “corporations are people too” thanks to Citizens United, public entities are still managed by people who can and do commit crimes, and that’s what the US Attorney is supposed to do- find those people and prosecute and punish them.

That didn’t happen today. In fact, in the grand scheme of things, nothing happened, except tax dollars were once again wasted at Wright State, but that’s par for the course. That’s all the place is really good at lately. Today at the Board of Trustees committee meeting if you were listening carefully- you heard about how Wright State lost $1.3M when the building they helped build for ATIC [7]– was sold out from under them- and they got to absorb the loss. Of course, the building was built by Wright State “benefactor” Bob Mills, who keeps showing up on almost every bad real-estate deal the university has been involved in. There was also discussion of creating the Douglas Fecher Boondoggle Memorial Respectability Center for the Preservation of His State Bailout… to which Trustee Langos said he wouldn’t vote for until the University had delivered a true “Space Plan” (not to be confused with Trump’s Space Force” where the utilization of physical spaces and classrooms is appraised and analyzed with our new lower enrollment. The meeting was held in the Fecher Boondoggle space- Fecher, who is the CEO of Wright Patt Credit Union (and a former EMT- as he shared today) sold his former HQ to the Wright State sham shell corp Double Bowler so he could move into the former CSC building which was owned by Bob Mills. The building has been a giant sucking sound on the WSU balance sheet- but now- it will become the new home of the Wright State Archives.

Apparently the Wright State Library isn’t a safe place for storing books, with every kind of problem down to insect infestations and no fire suppression system. So, $450,000 was raised to move the collection to this building and only this building. I’m pretty sure Mill’s will get the construction contract to do the retro-fit, and then, Wright State will have a building across the street from campus to hold a collection that’s supposedly worth about $20M, and used by approximately 4500 people a year (note, many of them are WSU students ASSIGNED to do homework utilizing the collection).

Two questions come to mind- where is the $150M that donors gave to the University in the Rise and Shine campaign that was touted as a great success, and why doesn’t the university sell off the collection and the cost of maintaining it to someone else- they need the money… to pay fines to the US DOJ. 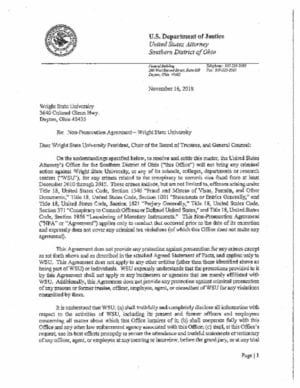 I’ve got the entire “Non-prosecution Agreement” as a PDF for you to read, but, I thought I’d just pull out the pertinent bullshit that should make your head spin as a teaser to read the whole thing- it’s the shortest document I’ve seen in the Wright State drama, weighing in at a brief 5 pages plus a signature page. It’s even written in clear English, which I guess is what you get for a million dollars to pay for a Harvard Law Grad to slap you on the wrist.

This Agreement does not provide any protection against prosecution for any crimes except as set forth above and as described in the attached Agreed Statement of Facts, and applies only to WSU. This Agreement does not apply to any other entities (other than those identified above as being part of WSU) or individuals. WSU expressly understands that the protections provided to it by this Agreement shall not apply to any businesses or agencies that are merely affiliated with WSU. Additionally, this Agreement does. not provide any protection against criminal prosecution of any present or former trustee, officer, employee, agent, or consultant of WSU for any violations committed by them.

Note that last line- “Former trustee” making you wonder if the current trustees are buying immunity?

This is the don’t talk about Fight Club clause. The district attorney has eyes on you, don’t talk, don’t mention this mess, and maybe, it will go away.

Except, WSU can’t go directly to jail, it can’t pass go, it can’t collect $200 Mr. District Attorney, because WSU isn’t a criminal or a person. It’s a public entity. The criminals are still running around Dayton doing business, or have retired to South Carolina, and you haven’t done a damn thing about it. It’s like someone farted in a room, and everyone knows it smells, and even know who did it- but no one is willing to actually call them out- including our Harvard trained lawyer. Yet- since I haven’t done my job (yet?) others may… seriously, when you read this next part, all kinds of people still might be smart enough to go after people who actually committed crimes and benefited from it.

Let’s play abbreviation bingo just because it’s fun: DOD, DAF, DOL, DHS, DHHS, NSA, USSS, NIH – did we miss any? I’m guessing the DOJ is acting on info uncovered by the FBI- but, I’m not a lawyer except when I play one in my own defense on TV.

The big problem is the lie the attorney tells in the last paragraph of Exhibit A:

Upon being notified by this Office of the federal investigation, WSU’s Board of Trustees immediately addressed the H-lB visa employment issues. WSU removed the faculty and employees responsible for the contracts and completed substantial remedial measures. This included restructuring key departments such as the General Counsel’s Office and the Department of Compliance in order to insure all existing and future H-lB employee applications comply with all federal laws and regulations.

If the trustees had truly addressed this- there would be 2 less trustees on the board, and at least some folks in an 8×8 cell. Instead, the taxpayers are paying a million dollar fine while the people who were implicated were paid to go away, or walked away with retirements and separation pay.

There is no justice in this action by the Justice department.

I hearby crown US DOJ attorney, Benjamin Glassman with Hue Jackson [9] Job Security award. The HueyJ award is where you get paid a lot of money, to successfully do nothing, and even after getting fired, end up with a job again smelling like roses.

Just remember, from now on, universities are people too.

If you enjoyed this post, make sure you subscribe to my RSS feed [10]! If you wish to support this blog and independent journalism in Dayton, consider donating [11]. All of the effort that goes into writing posts and creating videos comes directly out of my pocket, so any amount helps!
Subscribe
3 Comments
Inline Feedbacks
View all comments

The crooks, cronies & criminals at WSU got off pretty damn easy. I am shocked, shocked.

David Hopkins is not universally loved. He may be loved by naive simpletons but individuals who have an IQ above room temperature recognize him for what he actually is, a scam artist.

[…] Universities are people too? WSU gets a fine and a gag order on H1B visa scandal […]