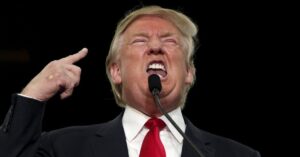 For the last 5 years, I’ve served as power of attorney for a severely mentally ill veteran. He’s got a 100% disability rating. He’s deemed legally “incompetent.” When he’s ill, he can even scare me and I don’t scare easily.

The behavior of “President” Donald J Trump in last nights debate was worse than anything I’ve seen out of my ward on his worst day.

There are rules, there is decorum, there is reality, there are facts- unless you are mentally ill.

If this had been court of law, instead of a debate stage, the judge would have had him bound and gagged.

If he had been in an encounter with the police, he’d have been arrested and put in a straight jacket (he’s white, so he probably wouldn’t have been tazed).

Is this the man we want in charge of our armed forces with his finger anywhere near the button?

Can we wait till the people speak on election day, when even if he gets his butt kicked across the nation with maybe the exception of Wyoming and South Dakota, he declares himself the winner and refuses to leave office, or worse, decides to order his “Proud Boys” to let loose?

It’s pretty obvious the Senate has been ignoring his deranged behavior, giddy with their freedom to exert unchecked power, granted by a man who loves civil unrest and riots because he believes they help his cause.

And what may his cause be you ask? After failing at business, blowing through daddy’s money, believing his fantasy construction of “success” – he’s somehow mastered the “fake it until you make it” axiom. Of course, he denies he has had help from the Russians. He somehow can’t understand that his business empire is a sham, and when the notes come due, he plans to either still be in position to blow up the world, or comfortably living in Moscow laughing at how stupid we were to allow him the honor of being president.

If our Congress can’t act, if they won’t act, if the Supreme Court doesn’t intervene to question the sanity of the man on stage last night in that “debate”- they too are complicit in the fall of our great country.

That this isn’t the topic of discussion in D.C. this morning is further evidence that our country has lost its way. That our politicians, that our military leaders, that everyone who calls themselves an American, isn’t ready to divorce ourselves and our country from this mentally ill, psychotic, narcissistic sycophant. It’s right there in the oath of office, the oath to serve:

I do solemnly swear (or affirm) that I will support and defend the Constitution of the United States against all enemies, foreign and domestic; that I will bear true faith and allegiance to the same; that I take this obligation freely, without any mental reservation or purpose of evasion; and that I will well and faithfully discharge the duties of the office on which I am about to enter: So help me God.

Take him out of the office, lock him up, silence him and his treasonous questioning of the legitimacy of elections; his threats of using military power against the people, before we no longer have a democracy.

We never heard of “Antifa” until his ascendancy. I never thought of myself as “anti-fascist” in my life- but I do now. Donald Trump is a fascist and he has no intention of working within our system of a democratic republic, therefore, he must be removed for our republic to continue. If you always believed you are an American, you too, must join me in calling for his immediate removal.

The stakes are too high. And the signs are too obvious. Donald Trump is unfit to serve as president. Remove him. Save our country.

The problem is, when Trump leaves office, a huge part of the electorate, the Trump “base,” will latch on to another right-wing idiot — like Ted Cruse or Tom Cotton — someone more clever and even more power hungry. I’m becoming more pessimistic. We may have one more chance, but past history shows that The Dem power players really like the status quo and that the most likely outcome of a Biden presidency and a House and Senate Democratic majority will not be the big and bold changes that we desperately need — but a big waste of an opportunity to make a difference. As the song says, you’ve got to believe we’re on the eve of destruction. We have to work to transform the MCDP.

@Mike Bock- or push for ranked choice voting- which blows the whole thing up.

publishers note- one rule we have here is you only use one name to post- this comment was posted as “Donnie J T” yet- the author has commented before as “Jackson”- I’ve changed it back. Please, don’t try to be cute- you can have your anonymity, but you can’t be 21 faces of Eve.
David – it’s no secret that you dislike The President. The fact of the matter is if the Democrats would’ve made a sensible selection from the field of candidates .. this would be a moot point. Instead, they refused to consider Tulsi Gabbard or andy wang in deference to a worn-out old horse, Joe Biden. Plenty of Trump moderates would’ve easily changed sides if there was a decent alternative. You can stoke a smokescreen and blame Trump; but, truth is – Biden is unacceptable, unqualified, uneverything.
Now, specific to that faux debate last night – it was an embarrassing charade for both men. Biden refused to condemn the unlawful misbehavior in some of America’s greatest cities while Trump spoke to the Po’ Boys. There are plenty of other leadership lapses that are atypical of Biden. David, the guy is from the petrified forest and not a serious option for the country. 4 Long Years ? get serious
David, it’s your forum, so spin it as you like. There’s no debating [so to speak] that we’ve been duped by the pay to play politico game. We have a guy, as you say, consumed w/ hubris versus a guy that doesn’t have all of his marbles. Rather than release your angst polarized on one guy, complain equally about the other person. BUT, look fully at this system of legislation and maybe you’ll see that the divisive attacks of Congress and the Senate are also part of the delivery of helplessness and hopelessness.
This slippery slope goes way, way beyond one self-absorbed madman.

Instead, they refused to consider Tulsi Gabbard

Not at all remotely qualified? He was completely inept as a senator and as vice president? So much so that there were all sorts of people pointing out his lack of qualifications when he ran for and served in those positions? Anyone who claims that Biden is unqualified is not being serious. Unacceptable because you don’t like his positions, perhaps. Unqualified? Nope.

complain equally about the other person

Yes, because Trump and Biden are equivalent and there are no differences between them. If you’re going to point out that Trump suffers from dementia and narcissism, then surely Biden must have equally detrimental problems to point out, right? Wrong. You might say that Biden isn’t as sharp as he was when he was younger (perhaps), but you cannot seriously say he suffers from dementia, and you can’t name any psychological disorder that anyone is suggesting he has.
There are two kinds of people who think that Tulsi Gabbard would have been a good choice for the Democrats, who think that Biden is unqualified, who think that Biden and Trump are equivalent: 1) People who lack basic reasoning skills and 2) disingenuous people who know that these things aren’t true but who prey upon the first kind of people in order to set those people up to vote against their own interests and instead to vote the way the second kind of people want them to.

I do not think Trump is nearly as bad as you make him out to be, although let me be clear, I am not a fan of his antics or personality. I find Biden to be intellectually dishonest in many ways, so I am not a fan of his either. People should vote for who they want to. I think they are American either way. This idea that people challenge one another’s “if you always believed you are an American”, is silly. We are all Americans and I have more faith in Americans than I do our current leadership options. I do not find him unfit to serve, anymore than Biden. Ill be ignoring their personalities and voting on policy.