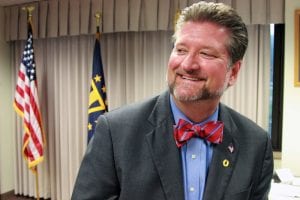 When Bob McDonald got the boot from the VA by Donald Trump I was shocked. A republican businessman, veteran, West Point grad seemed like the ultimate VA Chief for Trump. That he replaced him with an Obama era VA employee, Dr. David Shulkin was a surprise. Now, Shulkin has apparently been sent to the Trump Boardroom, according to the NY Times:

President Donald Trump is considering ousting embattled Veterans Affairs Secretary David Shulkin, who has faced an insurgency within his department and fresh allegations that he used a member of his security detail to run personal errands.

Trump has floated the notion of moving Energy Secretary Rick Perry to the VA to right the ship, believing Shulkin has become a distraction, according to two sources familiar with White House discussions. The sources were not authorized to discuss internal deliberations.

Instead of a high profile political appointee, why doesn’t Trump really shake things up, and put the guy that was sent to clean up messes in Dayton, Phoenix and Cincinnati, to the post? Glenn Costie was a VA lifer, working his way up in the system, and becoming the chief culture troubleshooter. Recently retiring from the Dayton VA, he was quickly picked up by Ohio Hospice to lead their veterans care initiatives.

Compared to Rick Perry, Costie actually has the experience in the VA system to make real, honest change.

Yes, he is a nice guy. He gave me a tour of the Dayton VA when I was running for State Representative in the 39th District in 2012.

Have you seen anything in Trump’s other appointments that would make you think that he’s selecting for people who actually have experience in the organization’s they’re intended to run, or the capability/desire to make positive change?

I agree he is awesome! Check out the interview Wright State Veterans’ Voices did with him.
https://www.youtube.com/watch?v=fX1zkthBNKY&t=3s