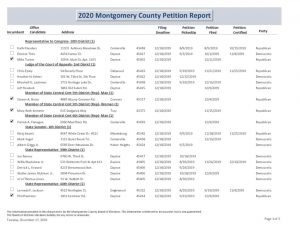 Looking at the petition turn in on the Board of Elections site and so far, there are some surprises:

Dayton 1-term school board member, John McManus has switched parties to the Republican side to run against minor-league party boss Russ Joseph for County Treasurer. Joseph, who lost to Republican Mike Foley after being appointed to county clerk of courts, then got appointed Treasurer by the party. Don’t worry, if Russ loses, he’ll be appointed to replace Mark Owens as the Dayton Clerk of Courts when Mark retires. This is how the Monarchy keeps things going.

Poor Fred Burkhart who is trying to run as well as an R for Treasurer didn’t get the message.

The Republican’s under Phil Plummer are as disorganized as always, running multiple primaries while failing to challenge the big democratic dog, Prosecutor Mat Heck yet again. Of course, the Dems can’t find a candidate for Sheriff no matter how bad the jail is failing, so it’s sort of a wash- both jobs control a lot of patronage jobs, which is how party power is usually measured.

Of course, the R’s haven’t figured out diversity either. Norman Scearce (full disclosure, I just designed and printed his hot cards) who is on the Trotwood School board is challenging Judy Dodge for County Commission, is going to have to primary the geriatric wing of the party as they roll out Arlene Setzer. So far neither Judy Dodge or Debbie Lieberman have taken out petitions or turned them in, but Debbie has at least 2 challengers including one from her own party.

Niraj Antani is going to have a primary for State Senate, but that’s not on the turn-in sheet yet. And remember, even if you turn in your petitions, the “Board of (S)Elections” can still find things wrong.

Expect to see a bunch of people turn in for OH-39 to replace Fred Strayhorn – all dems. And, there may be more than a few D’s ready to take on Mike Turner for OH-10 congressional.

The normal secret code of not challenging judges is in full force, but for the two empty seats, there will be a free-for-all. Of course, since Judges can’t say much about what they’d do, these races are mostly about credentials and name recognition.

More soon- including an analysis of campaign finance from the last election. See how much the best politicians money can buy actually cost, Nov 2019 edition.

If you enjoyed this post, make sure you subscribe to my RSS feed [2]! If you wish to support this blog and independent journalism in Dayton, consider donating [3]. All of the effort that goes into writing posts and creating videos comes directly out of my pocket, so any amount helps!
Subscribe
1 Comment
Inline Feedbacks
View all comments

Dennis Lieberman is a lying sack of sh*t who has no business whatsoever being a judge. I have no problem with defense attorneys representing clients but Lieberman is fundamentally dishonest to his core.