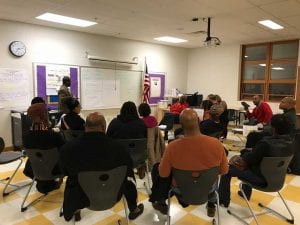 The Dayton Unit of the NAACP had another community meeting tonight about what the people they elect are doing to them. Much outrage, lots of talk, and nothing will change.

Sorry, you had a chance to not re-elect some people, and choices on who to put on the school board- but, you didn’t vote, and those that did, voted for people I didn’t endorse. But, that’s beside the point.

On the school closings. First off, if you aren’t outraged about the “Task force” that was named and tried to meet in secret, that’s your first mistake. Second, you elected four new people to the school board to effect change. So far, we’ve still not finished firing the idiot Superintendent Rhonda Corr who the last board hired over a totally qualified, DPS grad, black male. [2] Didn’t see the NAACP up in arms when David Lawrence wasn’t even allowed to be a finalist. Then, there is the question on why is the new board continuing with Dr. Elizabeth Lolli instead of opening up a posting for Superintendent right now- when all the positions across the nation are being posted? You wait too long, and you get the Rhonda Corr’s of the world applying. Lolli was one of two key Corr hires- the other quit and sued- and if not for that lawsuit, Corr would still be causing chaos. Lolli has yet to tell anyone what her plan is to fix DPS- instead, she seems to be preoccupied in sucking up to the task force.

Someone has to be able to tell us where all these kids went and why. That’s something that should have been tracked by DPS every time a student left. My guess is the rapid changes of adding middle schools, having four bell times, high turnover of teachers, the stabbing at WOW, the throwing of the Dunbar/Belmont game, the crazy school board meetings- all are factors in why parents said “great things are happening anywhere but in Dayton Public.”

But, many of the people at this meeting don’t even have kids in the district. What worries them is why are they still paying for new buildings- that will be handed over for pennies on the dollar to charters or other private businesses? That’s what happens when a building isn’t used for 2 years by state law (this is what happens when you let Republicans Gerrymander the state so they can take control, even though this was a mostly Democratic state before they finagled the districts).

Tomorrow night- some other group is hosting a meeting about the closing of Good Sam Hospital.

My position is I don’t care what Premier has open or where. The people of greater Dayton are already screwed because we’ve allowed a duopoly to buy every medical practice in the city, operate in collusion via the “Greater Dayton Area Hospital Association” – GDAHA (who has a seat on the DPS task force btw) and raise prices and deliver less than amazing care.

However, over the years, the taxpayers have subsidized Good Sam and Premier by allowing them to operate their money machine as a non-profit and evade property taxes. In fact, in more than a few cases, we’ve had to fork over tax dollars to help them do things like beautify their neighborhoods or build some new buildings etc.

What real city leaders should do is tell Premier it’s fine and dandy for you to close down Good Sam, but, no, you can’t demolish it. Not until it’s been placed up for auction to make sure there aren’t other players who would like to compete to provide non-profit health care.

I’m sure The James or the Cleveland Clinic, or the UC Hospital Network or some other mega-medical institution might be interested in operating a hospital there, and would be happy to buy the buildings and maybe even pay taxes. Deny the demolition permit, force Premier to allow our community hospital a chance to remain.

Or- to possibly serve as any of the following:

Of course, none of these ideas will happen, because, when it comes to the Monarchy of Montgomery County- the demolition contractors and construction companies all pay well to buy their future contracts. If we keep desecrating the West side- more money for demolition- right?

While Cincinnati and Columbus are booming, Dayton is doing everything it can to tear itself down. As always, follow the money, and you get answers.

If you enjoyed this post, make sure you subscribe to my RSS feed [3]! If you wish to support this blog and independent journalism in Dayton, consider donating [4]. All of the effort that goes into writing posts and creating videos comes directly out of my pocket, so any amount helps!
Subscribe
6 Comments
Inline Feedbacks
View all comments

Your self-righteous, self-important, sanctiminious, pious ramblings always seem to one up themselves. “… You didn’t vote who I told you to vote for…”. Forgive me, you are? You claim DPS meetings are a spectacle, but sir you contribute to these spectacles by thumbing your nose at the board. What exactly is your endgame here? I read your reasons for not running for the school board, and it was feeble at best. We all have challenges in our lives, and? You seem to be able to make it to every meeting to embarrass yourself, and go on conspiracy laden attacks of board members, so come on… Put your money where your mouth is. You, sir, are not helping the issue. You act so superior, so enlightened, so much better than everyone else and yet sit idly by, doing your battles from behind they safety of your keyboard on your little op-ed website. I, and many, are embarrassed by you, and for you. If you have comments and suggestions that are really with while, offer them humbly. Humility goes a long way, your arrogance on the other hand, stands in the way of any valid points you may make. Step off your soap box for once, and check your axe-to-grind at the door. Be part of the change and not the problem. Right now you are not a credible source of information, you’re like a jilted ex lover who is out for sick revenge. Grow up. Please.

Welcome David Johns, don’t recall your participation here before. If you don’t like my “self-righteous, self-important, sanctiminious (sic), pious ramblings ” you are welcome to not read them. As to thumbing my nose at the board- let’s see, because I ask questions like why won’t you even accept a bid on the old Patterson Kennedy site- that was higher than your entry bid price? Or why is Adil Baguirov allowed to stay on the board when he doesn’t live in the District? Or- why is Rhonda Corr our superintendent- a position they actually adopted in spite of their glowing performance review? “Put your money where your mouth is”- really? Do you think those video’s I produce spring out of thin air- or all my time isn’t worth a dime? So many DEA members have thanked me for finally bringing a voice to those who continue to work in a dysfunctional organization. In fact, many of my leads come from people within the organization. Do you really think I knew about the brawl in Ponitz through omnipresence? “The safety of my keyboard” is a laugh. Although there are some businesses that step up and hire my firm based on this blog- they are few and brave. There are many that have blackballed me since I went up against Mayor Turner so many years ago with a black mask- to protest illegal secret meetings about how to make sure that the face of the public never be seen in a public meeting. Fixing this school system is first and foremost on my mind. And sure, I was jilted when the district first marketing contract to the Ohlmann Group, the high bidder that did work that even they found lacking (of course, they had zero understanding of either the issues or the personalities that were causing the district to lose students) and then to hire two unqualified African American females at a ridiculous rate- who are making 20 minute facebook videos of rah rah- instead of recruiting students to the district with clear concise messaging on “Why DPS” Thank you for signing your… Read more »

David E is doing good work with this blog. While not everyone is comfortable with his methods and style, he shines a light on some of the bullish!t that goes on in Dayton.

DPS isn’t working very well at all. Highly dysfunctional. It’s past time for a wholesale change of personnel, starting with the board and admin.

My man, if your argument is that David is some slacktivist hiding behind a computer screen, you have not been to a school board meeting. By demanding he be ‘part of the solution and not part of the problem’ and to offer his comments ‘humbly’ you’re telling him to do the opposite: to shut up, tow the line, and be ignored. If David had ‘humbly’ suggested the board not hire Rhonda Corr, people like you would be in the comments yelling “if you were so sure about that decision, why didn’t you speak up sooner/louder?” I’m sorry you’ve chosen to be annoyed by David’s personality or the sound of his voice, but you’d be hard pressed to disagree with actual content of his rhetoric.

The fact that you are so annoyed by this and urging him to stop should encourage him to keep going. Even if things were objectively improving, people like David are necessary to keep things honest and on a positive trajectory. Getting caught in a zeitgeist of false optimism only leads to greater heartbreak when the bubble pops and the truth comes out (and it always does). Someone against all odds wins big on the roulette table, instead of taking their money and walking away, they’re going to put it all back down and let it ride. David is the guy saying what a stupid idea that is. You’re the guy yelling back “SHHH! Don’t ruin their fun!” Who’s the ethical one in this situation?

Since I like to vet sources, I Googled “David Johns Dayton” and it seems the closest one is in Kettering (results of course unverified and unreliable), and there’s a funding page out there somewhere for a Dayton-area David Johns to buy steel panels to put on his house because it keeps getting shot at and he’s tired of repairing bullet holes.

Offered to lend some levity to the discussion.

I learned long ago, especially when doing similar good things in my industry, that shakers and movers will always have know-it-all critics. The trick is to give critiques fair evaluation before deciding to consider them as valid or to trash-file them as nut cases. (Sidebar: I used to get a lot of thumbs-up comments to management on my work, but I do remember one in particular where a guy tried to rip me pretty hard…written illegibly and incoherently on the back of a piece of scratch paper. A not-so-bright manager put just that one in my box with a note that “I should listen to this guy”! Go figure…) I’ve had my fair share of validity from listeners and customers, but the vast majority of them were from whiners who just wanted to air complaints without offering anything of real substance or even validity. Many weren’t even worth the time I spent listening to or reading them. I’d have to say this one truly falls in the latter category. Unless this clown can offer to better what you are already doing, I’d say you’ve already given him more of your time (and ours) than he deserves.