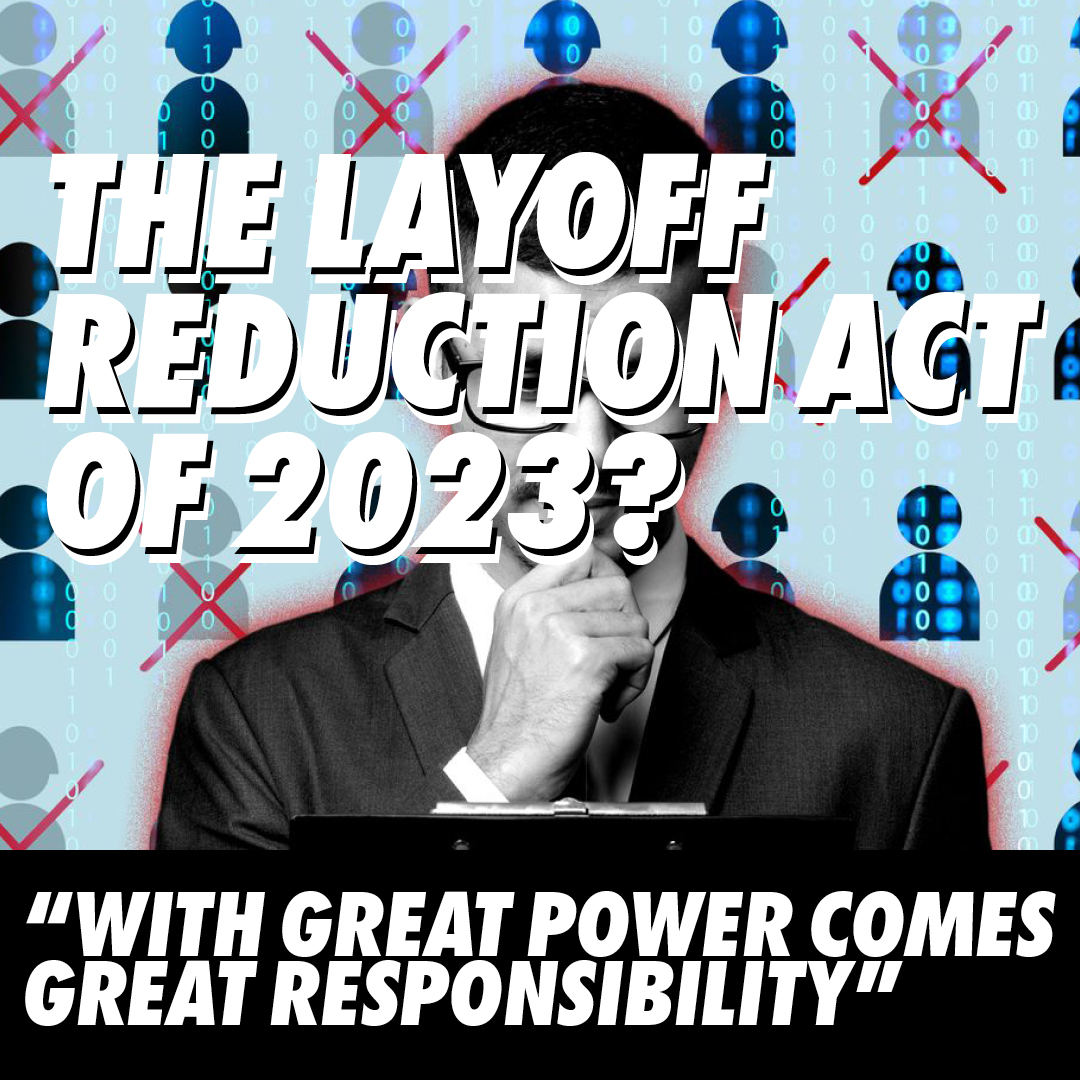 Had I beaten Mike Turner, I would have been advancing this legislation in Congress. Instead, he’s still whining about classified documents in homes. For the record, I don’t care if you are Biden or Trump, having classified documents outside a secure area, should result in the exact same thing- go to jail, go directly to jail, do not pass go, do not collect $200. That’s what happens to the average defense contractor in Dayton if they get caught doing it. I’m absolutely an equal opportunity prosecuter.

Sources: CNBC, and there’s even a layoff site now: layoffs.fyi

While all of you can say, well these are big companies and it’s a small proportion of their total employment, I’m going to suggest you think about these as Army divisions going into battle with generals having that many of their soldiers dying on the battlefield.

Just that list is 78,100 employees being casualties of incompetent, money grubbing CEO’s who are all grossly overpaid. Those CEO’s and their leadership teams are actually rewarded for “rightsizing” their companies.

It’s time to end this malarkey.

The mass layoff act will force accountability of corporate governance and protect workers. If a company lays off more than 50 people, automatically, any employee who is paid more than 10x the lowest paid laid off employee, has their salary reduced to the lowest paid employees salary for a year. All stock options, are revoked. Any stock sold in the proceeding year, is clawed back and put into the employees protection fund, to help fund all failed pension funds and extend unemployment benefits. Any employee holding more than 1% of the companies stock has to forfeit a percentage of their stock equal to the percentage of their layoff- if they lay off 3% of the workforce, they lose 3% of their stock.

No executive bonuses are paid for a period of a year to anyone making more than 10x the lowest paid employee.

No employees of the company are allowed to be awarded stock, or buy or sell stock for a year.

It’s time to end the casino like mechanics of equity markets, and to stop making the little people pay for these insane inequities. We need a maximum wage in these cases much more than we need a minimum wage.

The effect of 78,000 people being laid off isn’t just on the people who lose their jobs. This creates a ripple effect of problems for landlords, mortgage companies, schools where their kids go, communities losing tax base, etc etc.

It all comes back to Superman, “With great power, comes great responsibility” – and it’s time to hold the c-suite responsible.

Of course, this bill would never make it on the floor- because, well, all of congress is bought and sold for by these companies. So in addition, any company which engages in mass layoffs- the rights of their PACs to donate, their c-level employees to donate, must be stripped away for 10 years. This is easily achievable, since the first thing I passed in congress was a universal “donor registration system” requiring as much information as the “Voter Registration System” including tying every dollar donated to a social security number and employer.

We now return you to the reality of America today: where the rich, get richer and the rest of us get used and abused.

I’m not your congressman, yet, and I approve this message.

Trump was President and a president can declassify anything & a Vice President CANNOT ! Not the same Dave ! Just enjoy Bidens economy ! LOL ! Trump 2024 ! Fraud exist in voting by the way !

Agreed / disagree. None of what you propose is palatable David.
On the other hand what about unemployment rates?
Employment saturation?
Incompetent employment must be corrected – we are in a recession, remember !

Let alone Biden actually Broke the law / numerous times as a senator and V. P He admitted it: “…the documents were misfiled or misplaced.. “