State Legislators in Ohio have changed the Open Meetings Act to the Information Sessions Act, the ISA. This happened after it was determined that the old OMA actually stood for Only My Attorney wins. The new Information Sessions Act totally guts the Sunshine laws, allowing any public body to meet in private under the guise of calling it an “Information Session.” Also, they are all to do a pinky swear before entering a meeting that they won’t be deliberating. That’s not why they were elected anyway. Decision making is done for them by the people who put and keep them in office anyway.

The clause for removing public officials from office when there has been an injunction granted under the old OMA has been removed from that books as well, since no public official has ever been removed from office for violating the OMA. “We’re just trying to streamline the Ohio Revised Code and remove any silly, extraneous laws from the books” said Speaker of the House Larry Hornholder.

Other changes, the public will no longer be allowed to video or audio record meetings of any public body, because it may show them doing something stupid. 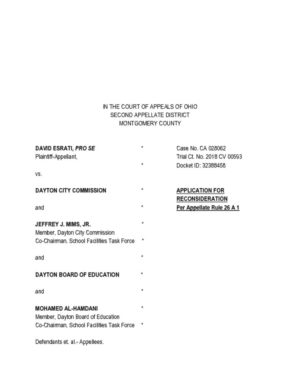 Luckily, Community Activist and candidate for the Dayton City Commission, filed an Application for Reconsideration per Appellate Rule 26 A 1 at 11:11 on April 1, 2019 to ask the 2nd District Court of Appeals to reconsider their decision to uphold the motion to dismiss granted by Judge Richard Skelton in Esrati’s case against the School Board and the City over the School Closing Task forces illegal secret meetings and violations of the old ORC 121.22. In his filing, Esrati asks the court to explain why they believe that asking questions is somehow the only indication of “deliberation” in light of US Supreme Court Justice Clarence Thomas’s record of going 10 years between asking a single question in the court.

Esrati also brings up the 14th amendments “equal protection clause” in that lawyers have become a privileged class in OMA cases- as the only ones who can be compensated for their time. Esrati asks is this akin to men should make more than women, or whites should make more than blacks? Had he known that the Statehouse was going to change the law, he would have known the answer.

So rare is an Application for Reconsideration, that many local lawyers weren’t even aware of this course of action. Esrati looks forward to the 2nd district court justices continuing their error so he can take this case to the Ohio Supreme Court, and concurrently file a case in Federal Court for review on the both the Equal Protection Clause and also for viewpoint discrimination.

Attorney Brian Wildmouth of Sushi and Wildmouth when asked for comment said “I love David Esrati, with each filing he makes I get paid more. This has been a wonderful case for my firm. I wish there were a hundred more like him.” Dayton School board President William Harris was unaware that the Dayton Board of Education had spent over $40K defending themselves on this case, and when asked for comment, all he could say was “I wish I made that kind of money.”

Esrati also admits that his post of April 1, 2018 [2], about a new Charter taking over Dayton Public Schools was, you guessed it, an April Fools day prank.

If you enjoyed this post, make sure you subscribe to my RSS feed [3]! If you wish to support this blog and independent journalism in Dayton, consider donating [4]. All of the effort that goes into writing posts and creating videos comes directly out of my pocket, so any amount helps!