It wasn’t but a few months ago when the Dayton School Board meeting was in chaos over the hiring of off-duty police to attend Dayton Public Schools sporting events.

The group “Racial Justice Now” saw it as just another step in the direction of the “school to prison pipeline.” There had been other meetings, in DPS buildings, where they were vehemently against the idea of “school resource officers” – that’s code for cops in schools, as sending the wrong message and being unnecessary.

Dirt patches, trash, and a stabbing.

And then a 7-year-old girl was stabbed yesterday on the playground, during recess, at WOW- or Residence Park elementary.

By a man described as being between 18 and 20 who walked onto the playground and shanked her through her lung.

The community is in shock. There is outrage. Fingers will be pointed all over the place,  lawyers will file lawsuits, “activists” will be up in arms, and lots of armchair quarterbacks will weigh in.

City Commissioner Jeff Mims is already making noise- as well he should, his daughter is the principal at World of Wonder. But even he recognizes that no amount of security, fences, security- will stop this, anymore than metal detectors, or school resource officers, or if you are a nut-job, arming teachers- will solve this.

This is just another example of how screwed up our country has become. It’s just closer to home.

Thankfully, this wasn’t Columbine or Sandy Hook. So far, the little girl is making a heroic comeback. But, let’s get real- this was the action of one person, who right now is still walking the streets, somehow thinking that he’s some kind of superstar- since he hasn’t been caught yet.

I have a phrase for adults who stab little girls in the chest and run- you’re a piece of shit. These are the types of people for whom capital punishment is made. Not that I’m a big fan of capital punishment as we do it in this country- where it takes 20 years and millions of dollars to take care of something that should be as easy as wiping the dog crap off your shoe and being done with it.

This isn’t about safer schools, fences, school resource officers- it’s about us. Us as in what kind of community do we live in? What kind of expectations do we place on life, liberty, the pursuit of happiness, and freedom. And what are our community standards?

Everyone will say- this is America- we’re free, we’re a democracy, we are the land of opportunity- when if fact, we’re not. We’ve been fooled, as our rights have been diminished through the “patriot act,” our elections have been turned into an auction/reality TV show, and most of us have zero chance of economic mobility- while we all believe we can hit the jackpot, or play in the NBA – despite being 5’3″- just look at Muggsy Bogues! [2] We’ve got more people in prison than any other “free” or “democratic” country- and refuse to acknowledge that being number 1 in this category isn’t something to be proud of.

But when it comes to community standards- this is where we fail. We set our expectations too low, and accept absolute mediocrity as acceptable. We fight change, we don’t like strong leaders, and we’ll stick with stupid because that’s what we’ve always done. 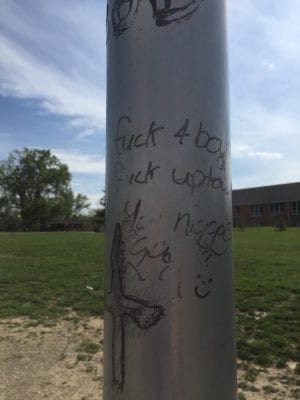 Fuck and N word, on the pole, in the playground where a 7-year-old was stabbed

I went out to the playground at Residence Park Elementary School today. I’ve been there a lot over the last 4 years- because there is one solitary backboard on the playground- and almost every other time I’ve been out, it’s needed a net and I’ve hung one. Today, I was happy to see, a net- and it wasn’t even one of mine. But, when I looked around, wondering what the scene had been the day before, where she stood, where she fell, and what kind of chaos must have been going on- I was struck by other things; how much the school looks like a prison, that the grass in the yard was splotchy and there were patches of dirt, that there was trash on the playground, that the pole supporting that backboard had obscene racist graffiti on it.

Is that the best we can do?

Is it too much to ask for our schools to be pristine oases of lush soft grass, with impeccably maintained playground equipment, and that there be no trash, no graffiti and set a standard for the community?

It took me back a few years to when I was making the video talking about my green nets. I had an intern through Youth Works- and I took him to Orchardley Park in Oakwood to shoot what a public park should look like. You’d think he was in the land of Oz. He was amazed, the park was clean, there weren’t cracks in the asphalt, the backboards had rims that weren’t rusty, they even had nets. The park had bathrooms that were open, and “they don’t even smell” was what came out of his mouth. Parents were playing with their kids, having a picnic in the grass, the sounds were of people laughing- not rap, not obscenities or the standard trash talk I hear on every single basketball court in Dayton.

That’s where we fail. We accept a sub-standard as the norm. Drive along U.S. 35 W, and count the number of light pole bases without lights between Abby Road and Liscum Drive. Then go look on 35 E.

Drive down W. Third street and see how many businesses are closed, but still have signs up, or are boarded up badly. Then look in other communities like Kettering, or Centerville- and ask “would they allow the buildings to rot and be overgrown with weeds?” The answer is no.

When we let our city look like a dump. When we let graffiti stay up. When we let weeds grow through cracks in our basketball courts- aren’t we sending a message that our people really don’t matter?

Are we sending a message that it’s OK to run the streets and stab little girls on a playground? Why hasn’t anyone stepped up to say “piece of shit’s name is ____________” – is it because we don’t feel safe? Is it because we’ve cut our police to the bone, while allowing private institutions that don’t pay property taxes like UD, Premier Health, Kettering Health, Sinclair- to start their own police forces to protect their assets, but leave the rest of us hanging? Add up the number of the institutional cops and they probably come close to equaling the Dayton Police department- throw in the  DPS  “School Resource Officers” and you’re probably exceeding the number of “real police.” It’s just another example of how we take care of the money- and leave the poor people to suffer on their own.

There was a meeting a few weeks ago against regionalization- and there will be another Monday. The white racists of the establishment, with their token African American pogues, who have been slowly stripping every last bit of value from the citizens of Dayton, who pay the 2nd highest income tax in the second highest tax burdened county in the state- will get up and say with a straight face that streamlining and reducing our government overhead is a bad thing. They will talk about disenfranchising black voters. They will stand there and say that what we have works.

Residence Park is proof that the system has screwed a 7-year-old girl over, and we’re going to continue down the path of the wrong discussion. It’s not about a stabbing. It’s about the condition of the community that set the stage for that stabbing.

Until we realize that we have met the enemy, and he is us, we’re screwed.

It’s time to take a serious look at our problems. Our leaders. Our operational performance at the basics of government. The way we conduct our elections. The way we “rehabilitate” our “criminals” and even who the real criminals are. And as always, the old detective/journalists adage holds true- “follow the money” and you will find out where the real injustice is happening, and it’s not as simple as a knife and an unknown piece of shit.

I agree strongly with what you had written, you wrote what I have thought and known for ages, I have talked to many people that share the same energy that your words speak. To correct this “delemon”, we need a leader to correct this situation, I nominate you to be the Captain of Ship, with me volunteering to help solve us from us.

Perfectly stated David!!! You couldn’t have hit the nail any more squarely on the head!!!

Where are the security cameras ? Downtown Dayton has them. Cameras should be installed immediately school security is first and foremost on the agenda. millions for a stinking river project . what company will move to dayton when there workers cannot send there children to schools that have no security? What company would move to dayton when neiborhoods look like warzones ? Streets that are undrivable , Street lights out or stolen?

Stephen- the school has cameras. Lots of them. The video is no doubt being analyzed. That’s not the issue of this post.

I’m sure no one has said anything about who did it because this was a “hit” of sorts. Not the first time in Dayton (or anyplace, really) that a child pays the price for the actions of a parent or relative. Yet another price we pay…

[…] what do you get for all that money? A police department that can’t find an “18-20 year old light skinned African American male” who boldly walked onto a school…– despite there being cameras. Unsolved murders of a police officer- Kevin Brame, more than 11 […]