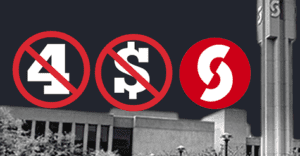 [1]Dr. Steven Johnson continues to get away with lying about the value the Montgomery County taxpayers donate to surround counties in providing Sinclair services.

With the passage of the levy, Johnson said the college will continue to focus on making its educational offerings affordable and accessible.The levy, which is one of two Sinclair has in Montgomery county, faced little opposition and Johnson said he believed the results proved that. Sinclair’s second levy, an eight year $8.5-million one, was passed in 2015 with 54 percent of the vote.

David Esrati had launched an opposition campaign called “Keep Sinclair Fair” [2] but it appears to have never picked up steam. Esrati called for Montgomery County residents to vote against the levy while advocating for other counties Sinclair serves to pay a tax levy.

Sinclair has the authority to put a tax levy on the ballot in Warren County but Johnson has said such a measure is unnecessary at this point. for (sic) The money generated by the Montgomery County levy can only be used within the county, according to state law, meaning no levy revenue can be used at Sinclair’s locations in other counties.

Note, Keep Sinclair Fair spent a little over $1000 to their half a million plus. Throw in all the Sinclair ads you saw for non-Levy related promotion- and it probably came in at over a million. We not only have the best politicians money can buy, but the highest tax burden money can buy.

Congratulations to all Montgomery County Voters- a big thank you from Greene, Preble, Warren counties- who get Sinclair services without any property taxes at all.

If you enjoyed this post, make sure you subscribe to my RSS feed [4]! If you wish to support this blog and independent journalism in Dayton, consider donating [5]. All of the effort that goes into writing posts and creating videos comes directly out of my pocket, so any amount helps!
Subscribe
1 Comment
Inline Feedbacks
View all comments

Thank you for your efforts on this issue!