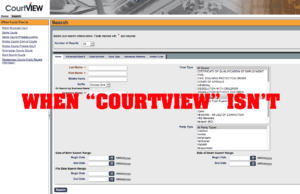 [1]In preparation of watching oral arguments this morning at the 2nd District Court of Appeals I visited 5 different websites to try to prepare myself for the cases to be heard. That should be your first clue that something smells in Denmark.

The docket notices are filed as PDF’s (Portable Document Format) [2] as are many court documents. In the day of mobile devices, this is so 1993 that alone should be cause for embarrassment, however there is a federal law on the books that should be forcing these courts to start adopting purely digital workflows- it’s called the Americans With Disabilities Act- known as ADA and it has been the law of the land since 1990. What’s even more embarrassing is the EEOC.gov site that talks about the ADA looks like it was built in 1990 [3].

In my attempts to research the four cases in advance [4] I was able to find the appellate brief on the Montgomery County Pro site and download and read the document on my laptop. However, when I tried to do the same in the other 3 counties including Greene, Clark and Miami Counties [5] all that I could access was a list of fees paid for a case, not the actual docket documents. Their sites were all built by the company “Equivant [6]” who have offices in: Canton, Ohio, Helena, Montana, Traverse City, Michigan, Wheat Ridge, CO and Maitland, FL as well as Ottawa, Ontario, Canada.

The Montgomery County “Pro” site [7] (PRO stands for Public Records Online) is home built and allows access to all the actual case filings, even though they are in PDF format. It has many of it’s own issues, but compared to the “Equivant” systems it’s clearly superior.

Furthermore, if taxpayers are indeed tasked with voting for and choosing judges for the bench as they are in Ohio, it should be easy to find and review judges dockets, review decisions and even watch court proceedings on YouTube. This is how it’s done when the courts are brought into the 21st century. An advantage of properly filming all court cases, is that instead of having to rely on court transcription services, video can provide transcripts that are almost as accurate as transcription services- and at a much more affordable cost to those representing themselves (pro se). If you read this NY Times article on the dangers of speaking “ghetto” in court transcripts “Speaking Black Dialect in Courtrooms Can Have Striking Consequences” [8] you would see how this system can be disastrous for some segments of our society.

Currently, the only appeals court putting video of their oral arguments online in Ohio is the 9th district court [9], however, they need a lesson in video production technology, as you can’t hear the judges questions or discern which judge is asking what question.

If you enjoyed this post, make sure you subscribe to my RSS feed [10]! If you wish to support this blog and independent journalism in Dayton, consider donating [11]. All of the effort that goes into writing posts and creating videos comes directly out of my pocket, so any amount helps!
Subscribe
2 Comments
Inline Feedbacks
View all comments

How to do a background check in Dayton Ohio- and how it could be easier. | Esrati

[…] In the meantime, to do a background check in Dayton Ohio, you are unfortunately challenged by the fact that we don’t have a statewide Clerk of Courts site with e-filing and unified search like the State of Wisconsin (see this post). […]