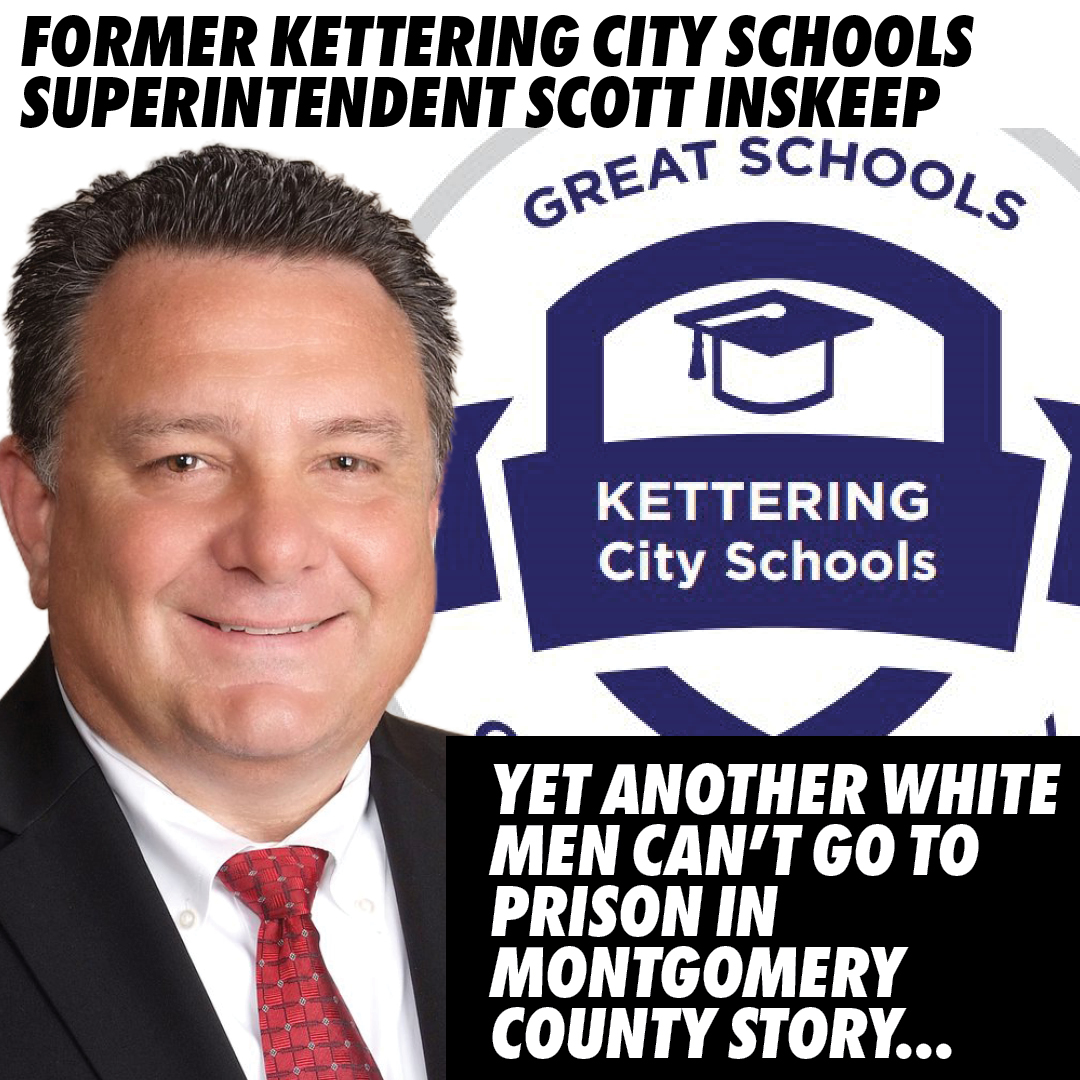 Full disclosure: Lori Parks (nee Simms) is a wonderful human being who I’ve known for a long time. Bob Parks is one of the nice guys in my profession (advertising). I’ve been out to dinner with them, have competed with Bob on the same contract before (both of us lost), and I’ve never heard anyone say anything other than nice things about both of them.

In the Jan 6, 2023 Dayton Daily newsless, there is a story saying the Lori Parks is resigning from the Kettering School board.

Lori Parks, a 19-year school board member, retired from the panel effective Dec. 31 to focus on professional work opportunities, according to her Dec. 29 letter.

“As I move to the next phase of my life in real estate and contract work for a national non-profit, I do not have the time to commit to my position as a school board member,” Parks stated in the letter.

JUST IN: Kettering school board seeks to fill vacancy after longtime member steps down

What’s missing is a story the newspaper will later report on, after reading it here first- without giving credit to this publication.

Lori’s husband, Bob Parks, owner of “The Marketing Formula” (note – the site is a holding page) sued the Montgomery County Educational Service Center and the Kettering City School District Board of Education Monday, October 31, 2022 2:32:25 PM CASE NUMBER: 2022 CV 04947 over a no-bid contract that was granted to his firm to turn Kettering Schools into a “Destination District” for families for a total of $265,892.

The fact that Parks is married to one of Inskeep’s bosses (the School Board) should have been an instant red flag. In fact, Inskeep checked with counsel before proceeding. He came up with a way to skirt normal board approval- fund it with a “grant” from the Montgomery County Educational Service Center. Parks submitted to Superintendent Inskeep a proposed written contract titled “2021 LETTER OF AGREEMENT” dated March 8, 2021 and signed by Inskeep on Mar 31, 2021.

Now, going back to basic business law, once you have a signed agreement, and a payment, per a written document, you’ve accepted the terms and it’s a valid contract.

And, since the money started flowing, Mr. Parks had every right to believe that he was hired to do the work.

Parks had the nerve to ask for $37,910 due on the 10th of April 2021 from Kettering Schools. He also had a “Performance contract” with the Montgomery County Educational Service Center, signed by, you guessed it, Scott Inskeep, on April 1st 2021 for the same project for a total of $227,980 to be completed by June of 2023.

With 2 signed “Contracts” what could go wrong?

The lawyers tell us in the filings: Lots.

For those of you who want to play lawyer, you can read the entire case, because it’s already been dealt with and closed. Both the ESC and the Kettering Schools wasted quite a bit of money on attorneys to snake their way out of this contract. Both relying on the fact that unless you are Libbie Lolli and the Dayton Board of Education, you can’t spend tax dollars without board approval.

But, wait, on May 13, 2021, the MCESC board voted to enter into a contract with “The Marketing Formula” (Pg 31 of the binder attached)

Contractual agreement between the Montgomery County Educational Service Center and The Marketing Formula, Corp. to provide marketing and educational experiences to Kettering City Schools through the 2020 – 2021 school year in the amount of $66,346.00.

Then comes back and forth with Kettering Schools about another contract to sign, and another invoice for $100,689 due Aug 8, 2021. And then $60,945 on April 11, 2022, with a note in the invoice mentioning that Superintendent Inskeep will be retiring on Aug 1, 2022 and that his retirement date means the project has to be finished 10 months in advance of the original completion date (which would require TMF to add additional staff to get it done).

At this point, the Kettering School Board Treasurer/CFO Mr. Cary Furniss, is sending an email on Aug 1, 2022 saying that the “Kettering schools is not continuing our relationship with The Marketing Formula effectively immediately. Note- this is Inskeep’s final day. And, Parks can call their lawyer at Frost Brown Todd if he has any questions.

Dang. All that money, and all those contracts, and communications, and yet, you’ve got to go away, NOW.

It would seem, that an inquisitive mind might wonder if Mr. Inskeep didn’t really “retire”- but, was going away quietly, after being caught in breaking the law. Just another case of corruption in Montgomery County being swept under the rug.

And the Kettering Schools fire back:

Finally, the Plaintiff does not allege that the letter of agreement contains a certificate from the School District’s Treasurer, President of the School Board or the Superintendent certifying that the amount required to meet the letter of agreement has been lawfully appropriated. Accordingly, because there is no contract between Kettering and the Plaintiff, Plaintiff’s claim for breach of contract against Kettering must fail.

Now, astute reader, if you remember my biz law 101 – you need a signature and a payment and that pretty much means you have a valid contract, why is Park’s the bad guy here? (Other than the fact that his wife was on the Board and shouldn’t have been doing business with them because it would look stinky?). Anyone who signed a check, engaged in emails with The Marketing Formula, was guilty as sin- and should be getting tossed in the slammer for spending public money on what they claim is an illegal contract.

Did Mr. Furniss not know that there wasn’t a legal contract? And, when did the school board find out? These are the kinds of question that raise this whole mess into the realm of the FBI and DOJ coming in for a “Culture of Corruption” investigation. The amount of money in play here is greater than the amount that got former Dayton City Commissioner Joey D. Williams sentenced to a year in prison, Roshawn Winburn to 6 months (that he never served) and Clayton Luckie for 4 months. Of course, the local small businessman, Brian Higgins got 3 years in the Federal Pen for mail fraud for an amount between $85K and $125K. Is it only Black men that get prosecuted?

Now, considering this reporter isn’t paid to do the investigations for the Feds, the Schools, the Taxpayers, or anyone else, there’s a whole bunch of secondary rocks that need to be turned over to get to the bottom of this.

This isn’t the first time that these County “Educational Service Centers” have been used as a way to wash funds in the breaking of the law. Bellbrook Sugarcreek schools got caught doing a similar thing with levy funds(update- I’m unable to find mention of this in the indictment of the Superintendent Doug Cozad by the state) by their junkyard watchdog, John Stafford. Here’s the state indictment:


There, the superintendent, Doug Cozad, got to keep his job while taking an Alford Plea agreement, where he accepted a single count of Dereliction of Duty and all the other charges were dismissed.

The lack of oversight on these “Educational Service Centers” is epic. But, the story of how these quasi-government organizations have grown in power and cost, as a haven for white double dipping retired superintendents is a story for another day.

The facts need to be set straight: Inskeep, much like Libbie Lolli with Hoodigate, both expended tax dollars without approval by their elected bosses, the School Boards. Both, should be under indictment. The treasurers who knew these funds were expended, without approval, should also lose their licenses and be held personally liable. (Instead, Inskeep is running a suicide prevention non-profit in Cincinnati) And the local media, that missed this story, should be forced to report it, while giving credit to your favorite local independent journalist who digs into the backstory of seemingly innocuous press releases to give you the real story.


For the record, this isn’t the first story about questionable no bid contracts going to ad agencies where public officials enriched the friends and family that I’ve published. County Commissioner Debbie Lieberman’s former assistant, John Theobald, got involved in a no-bid public health campaign that he steered to the “Wilderness Agency” that did her campaign work. After my article appeared, Theobald resigned, got put on the Montgomery County Veterans Service Commission, and announced he was now the “Chief Operating Officer” of Wilderness and a Co-founder (the business began 3 years before he steered the contract). No legal action was pursued by anyone for this seemingly gross ethics violation.

Please cite the legal decision where it was found that what Bellbrook did with the ESC was illegal or inappropriate.

I would caution using John Stafford as an example for anything. He is (editor has removed attack against another reader) from him. Not to mention one of the Dayton area’s biggest (edited out- attack) — maybe he will claim that title in his new homebase of Lebanon as well? And you don’t have to be a jerk to be effective– he just thrives on being (edited out name calling).

I fantasize that I'm Greta Thunberg

The ‘John Stafford’ of Montgomery County speaks. Both of you are jokes. Your so full of yourselves but in reality are just sad old white dudes who are full of hot air and no substance. You both need to get a life.

It’s interesting that despite overwhelming evidence in this story about wrong doing by the Kettering Schools and the Montgomery County ESC- I instantly get three new commenters railing against the brief mention of Stafford and the Bellbrook case.
Unfortunately, the Greene County Clerk of Courts is operating a totally obsolete website where there is no ability for the public to review and download filings. You have to pay per page- and know what you are looking for. The voters in Greene County should be finding a better COC.
I did find the State indictment of Cozad- and it doesn’t cover his methodology of illegal funneling of funds in the indictment, but I’ve been told it was via the ESC.
I’m uploading 21CRB01114 State of Ohio vs Cozad as a link into the original story.
And, just because you don’t like Stafford- doesn’t mean that he didn’t lead to the indictment and his Alford plea.
Also note- It’s not ok for commenters to use someone else’s name on this site. It’s also not ok to bash other folks on my platform. You can bash me, but unless you are signing your real name- and have a seemingly legitimate email- your comments will be edited.

The Dayton Daily newsless has a story today about the Kettering Board of Ed interviewing replacements for Lori Parks. No mention of any of the parts of this story. https://www.daytondailynews.com/local/kettering-school-board-to-interview-four-applicants-for-vacant-seat/NCFZZVCOFJHWFFNZMCAB5AOQYI/
The seat will go to Susan Bodary. Everything else is for show.

Fascinating David. The corruption is blatant. Thank you for your investigation and full disclosure.
What tangled webs they weave.