It was refreshing to see a whole bunch of fresh faces at the January 2017 Montgomery County Democratic Party meeting. Trumps been in office less than a week, and people are already seeing what happens when the system fails to stop stupid.

Welcome to the too little, too late club.

There are lots of new groups starting up- indivisible, the resistance, blue Ohio, the progressives, etc. etc. I did a “negative post” about the dangers of neophytes [1] last week, and was the bad guy, for explaining that you can create all the groups you want, but, you won’t get on the ballot unless you work within the existing system. 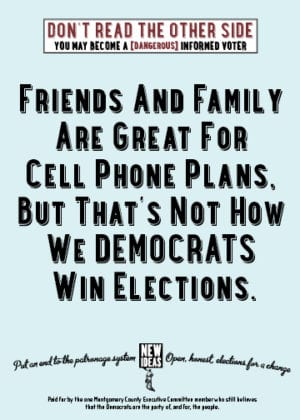 So last night, I showed up with my pamphleteer of the revolution hat on. I had a nicely printed 5×7 card explaining what has to change. I sat through the laughable “executive meeting” which is now held on the too small stage, behind a screen, with an agenda that’s almost identical to the general agenda. And when it came time to vote to add new precinct captains to the roll, I asked “how many of them either work for elected officials, or are related” [3]and almost got booed off the stage. “That’s not relevant” and “people who work in government are more likely to be involved” and “why.” As it turns out, only one of the 17 new appointees admitted to being related, which is great, compared to the rest of the central committee.  At the end of the exec meeting- I started handing out my propaganda. Some refused (Russ and Matt Joseph both turned it down). I went out to the general meeting area- and handed them out- saying “Welcome” to everyone as I passed out my flyer.

Some people came up to me immediately and thanked me. Others swung back around and said “I agree with …”

However, online today, I’m the bad guy. I’m arrogant, rude, my approach sucks, they don’t agree with my tactics- etc. Apparently, investing time and money in putting together a handout isn’t ok, and saying “welcome” is rude. Hissing and booing when I speak- is, just prim and proper.

Maybe that’s why the piece included “We need to talk about issues, not personalities” and ended with “Go ahead, shoot the messenger.”

The full PDF is available here. Friends And Family Are Great For Cell Phone Plans, But That’s Not How We DEMOCRATS Win Elections. [4] 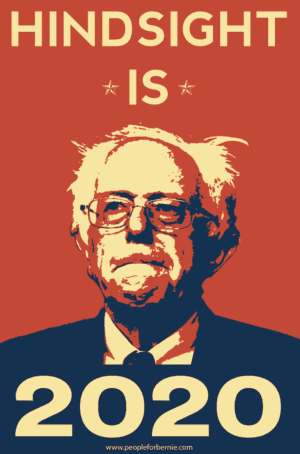 [5]However, there has been one change- they’ve hired a new executive director; Sarah Greathouse.  Sarah and her husband Erik have been political operators for a while. And for the first time- the party site actually lists who’s on the central committee [6], if they were appointed or elected, who are the ward leaders and who is appointed to the executive committee [7]. There is no mention of who is on the “screening committee”- or if it’s still going to choose our candidates and endorse in primaries.

The executive committee also named Sarah to the Board of Elections to replace John Doll, giving them $20K a year to help compensate her.

Now that the party doesn’t have the dead weight of the old HQ to support, the treasury coffers should be in much better shape. With an executive director who actually understands the internet, we may start seeing effective fund raising and competent emails being sent out (the old way was to send pdf’s of bad flyers as attachments).

For all the newbie politically active- the goal of the party should be to elect democrats, and especially, start winning the offices at the State level that run the gerrymandering operation that’s known as the apportionment board (Governor, Secretary of State and Auditor) in 2018.

We’ve got a lot of work to do.

If you enjoyed this post, make sure you subscribe to my RSS feed [8]! If you wish to support this blog and independent journalism in Dayton, consider donating [9]. All of the effort that goes into writing posts and creating videos comes directly out of my pocket, so any amount helps!
Subscribe
3 Comments
Inline Feedbacks
View all comments

Keep up the strength, David!

If you really want to discuss the issues, then drop the “fails to stop stupid” line”. We just endured 8 years of a communist holding the office, and anyone who even mentioned this or the agenda that President Obama attempted to move forward, mind you, and fast as President Trump is doing now, was called a racist. This country has some serious problems, and needs serious people to solve them. I am a conservative, and don’t agree with all the things the Republican party has done. I enjoy reading your articles, you seem to have the best interests of the DPS at heart.

Keep it up. Although it is the same party using a screen to discuss the agenda behind a curtain; like this is open. Things are slow to change; hopefully.

We did see many faces and new ones. will it wear off before 2018 in the mid term elections and new faces for the executive committee or just more secrets and hiding the meeting behind the iron curtain? Very tacky to have important meetings on a stage with the rest not allowed to see and hear and no input. very showy but little progress if this party wants to advance. This party needs to show open and transparency if it expects to take back the house and senate.

I know some they steered away from joining the executive committee; only ones they want while discriminating against individuals that want to make a difference and do what is right!