The board meeting was yesterday. The new list of upcoming candidates still isn’t posted on the website.
All five of the new candidates for the three seats on Dayton Public Schools made it on the ballot. This is a feat, because the threshold is 300 signatures.

Lacy is trying to make a comeback. If you need a reminder of why you shouldn’t consider him, here’s a video:

With 4582 views, to date, it’s one of the more popular videos about the school board’s ineptitude. Granted, compared to Reverend Harris, Sheila Taylor or Reverend Walker, Joe is 10 times smarter, but, he sucked up pretty hard to Dr. Adil Baguirov, the biggest rule-breaker to ever get elected [1].

Trotwood School board has 3 candidates for 2 seats.

But there may be issues with Andrews petitions- he seems to be 2 short of 50. He’s an appointed member now, and never had to run before, so he’s technically not an incumbent. If he doesn’t make it on the ballot, small shift on the board that’s on the ropes.

Trotwood council (at large) also may have an issue-

Young, a challenger to incumbents Finley and Kelley, is being challenged on the 1 year residency issue.

On the Montgomery County ESC- the hardest seat to run for- since the eligible voter pool is about half-a-dozen, [2]

The only challenger- Walker-Mabry is being called out because 3 of his petitions didn’t have all the info on them, as if voters actually care that he has his address listed.

Challenger Anderson is being questioned because of his petitions having 3 different residences for him. Tornado may be partially to blame, but who knows.

The Montgomery County Board of Elections will conduct an emergency Board Meeting tomorrow at 8:30am to certify candidates for non-partisan races and local options for the November 5, 2019 General Election.  Attached is the agenda for the meeting.  Please let me know if you have any questions.

The agenda is absolutely worthless- no details at all. 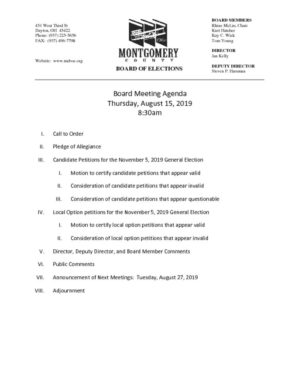 A proper agenda would actually specify some of the issues above, but, noooooooo…..

If you enjoyed this post, make sure you subscribe to my RSS feed [4]! If you wish to support this blog and independent journalism in Dayton, consider donating [5]. All of the effort that goes into writing posts and creating videos comes directly out of my pocket, so any amount helps!
Subscribe
6 Comments
Inline Feedbacks
View all comments

Ahhh, “Hoodie Joe” is trying for a comeback!! LOL!!

Give them a day or two to get that info up there, David. There’s a lot of info that needs to be put into that document. The bulk of the candidates for all the offices didn’t file until the last week before the deadline so most of them were probably just “certified” last night.

One thing that I thought was interesting this year is how many prospective candidates for office pulled a petition with the BOE, but never got around to filing it. Did they lose interest or what??? Here’s a link to that list…

Take a look at some of the offices. It appears as though all 3 people that were going to run for Riverside Mayor decided not to since they never actually filed their petitions. Several suburban council positions are the same.

Good luck with your run for office this time! Hopefully 2019 is THE year!!

“Hoodie Joe” Lacey is a clown. He was a big part of the crew responsible for steering DPS into the ditch, and keeping it there.

This loser needs to stay away from any elected office, anywhere.

It’s truly incredible that an accountant would have been so blind to the financial fiasco that occurred (and continues to this day) at DPS during his failed tenure as a board member.

Zip up your hoodie and go away, Joe. DPS has enough problems without you.

Looks like Joe Lacey was at the latest convention:

JUST SAY NO TO HOODIE JOE

Is this the same BOE freak show that was exposed years ago? The hillbilly director that wears a glue on hairpiece and was sailing on the love boat with his secretary and having the county pay for hotels rooms for them on bs trips etc.? Is this Hibner guy the one that messed up the ballots and stole the voting machines or knew about it? Is the one guy that used to work there still selling meth? Dayton is so messed up! How does the county and the city get so much money to pay for all of these losers?

Speaking as one who’s been paid as a parliamentarian–there is nothing wrong with the BOE agenda. In fact, I wish that more people would follow Robert’s Rules more closely–the DPS documents often look like the detritus of self-important aspirants than a concise record of a board’s proceedings.

Speaking of working as a Parliamentarian, that was the office that Lacey held for most of his years on the board–I’m wondering if the videos still exist of him telling John McManus that to move for reconsideration you had to have voted against the majority (the opposite is true) or of one of the many meetings when he used his position to interrupt and rule other members out of order (a competent parliamentarian shuts up about it until the chair asks for guidance). While I dislike increased spending, the DPS board needs to use a few dollars wisely and get one of the communication profs from Sinclair or UD or Wright State to provide those services (and given faculty salaries, many of them would work cheap).