When Facebook gives me more news than the Dayton Daily news, we’re all in trouble. Never mind the fact that I’m paying $9.95 a month for their newspaper-on-crutches, but now they are offering it for $19.95 for a full year of digital access. Nothing says desperate like knocking your price down to next to nothing. Click bait is their “new strategy” posting tidbits on Facebook, hoping to get you to hit their paywall. Exactly the behavior Facebook is trying to minimize. But, that’s all moot. 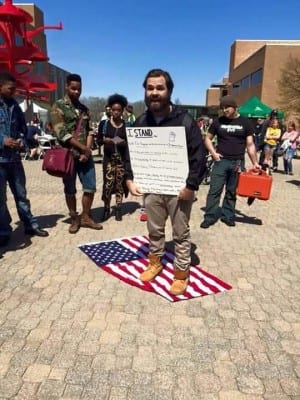 An unknown patriot stirring the pot.

In today’s Facebook feeds, friends are arguing about the veteran who protested at WSU by standing on an American flag. As someone who has actually been arrested and had to win 5 court cases protecting your right to symbolic protest, [1]I can guarantee you he was within his rights- and had he just stood their protesting with a sign, no one would be talking about it.

“I stand…-With Eric Shappard (SIC- should be Sheppard) and the preservation of 1st Amendment rights
-For all men and woman in service to this country
-For the accountability of media and other social institutions
-Justice, equity, tolerance, and diversity
-Upon the belief higher learning should provoke students to question social norms, mainstream values, and power structures
-The ‘American” spirit, is a revolutionary spirit- On the American flag because there’s nothing more American than that!

Unbelievably, not a single local “news source” had either the protester’s name, or even were able to verify his status as a WSU student. If my Facebook friends are to be believed, yes, he’s a WSU student.

His first mistake was thinking that WSU students would know who Eric Sheppard [3] is- and what that has to do with the American flag. Sheppard was protesting at Valdosta State University – standing on a flag to make a statement about the treatment of black men in this nation who are being gunned down. A publicity seeking veteran, Michelle Manhart [4], decided to do something about it- going to campus with her daughter filming- and stealing the flag. Amazingly, the cops did the right thing and arrested her and returned the flag. The video pushes buttons and the right wing nut jobs had a field day praising the veteran for her actions, albeit it turns out she had posed in Playboy on active duty and even posed nude later for PETA with… wait… an American flag.

Symbolic speech is powerful stuff. The Nazis understood it well. So did the Ku Klux Klan. Burning books, burning flags, burnings of effigies, ISIS is justifying its atrocities by using orange jump suits for its victims- to symbolize our detaining “their people” in Guantanamo bay. I actually had to explain to one person on Facebook why symbolic speech can be more effective than a standard protest, which in this country is usually measured by numbers- hence we have things like “the million man march.” Usually, in America, you need a herd to be heard in public. Of course, in private, you just need a lot of money and I guarantee you access to anyone you want in Washington, D.C.

The problem with symbols is they don’t always mean the same thing to everybody. Maybe that’s why early religions had such an issue with idolatry. And you have to remember, when the religions started out, most of this wasn’t written- it was spoken, since universal literacy and the printing press were far off in the future. I still find the symbol of Christianity being a cross to be odd- to celebrate Jesus, memorialize the brutal way that he died. Do we, as Americans use guns as a symbol to memorialize and remember Abraham Lincoln, JFK or Martin Luther King? No.

Another post on Facebook had this image going around- another view of what the American Flag stands for today: 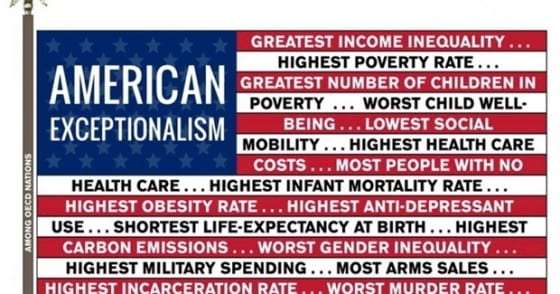 The article it linked to [5], was about how other countries don’t understand America, or how Americans don’t seem to understand what living in a “free society” really means. The reactions to these flag protests, full of vitriol, the grandstanding- over a symbol, taking over the conversation, when most Americans are living on the edge of survival- paycheck to paycheck, with a safety net that’s constantly being withdrawn inch by inch. We prefer the dream of success to the reality we live in. Thinking that we can all become an NBA star, a millionaire if we only work hard, or President of the United States, is so far from reality- if we weren’t all so seduced by this fantasy, any right minded psychologist would call us delusional.

There is a lot to protest about in this country. A few years back the Occupy movement [6] tried to bring a focus to the wrongs of the wizards of Wall Street who have robbed our country blind and brought the “world’s strongest economy” to its knees, yet, the Dow continues to climb beyond any recognizable relevance, the Fed continues to print money like candy- and the richest Americans are getting richer at a record pace, while the rest of us are being asked to “pay more of our share” to keep this house of cards from falling.

To add insult to injury, we take more interest in one aging former Olympian’s transgender celebrity story [7] than we do of the countless millions who aren’t able to feed their children, schools that aren’t preparing our children for colleges that are pricing themselves out of the reach of those who get there (if they aren’t shot by a cop for playing cops and robbers on a playground [8]), so that they can get their panties in a twist over standing on a piece of cloth.

The flag, which we pledge allegiance to so easily, is a symbol. Symbols mean different things to different people. Our country is supposed to be one where different people can have free discussions over issues- my only request is, let’s start having the discussion about ones that matter. I agree and support the actions of the Wright State protester- and you should too, if you truly believe in what our country’s founders said when they declared our independence in 1776.

If you enjoyed this post, make sure you subscribe to my RSS feed [9]! If you wish to support this blog and independent journalism in Dayton, consider donating [10]. All of the effort that goes into writing posts and creating videos comes directly out of my pocket, so any amount helps!
Subscribe
6 Comments
Inline Feedbacks
View all comments

I hope somebody kicks the living dog shit out of this guy.

Looks like the good old fashioned ad hominem attack is alive and well.

$19.95 for a year of DDN? Why? You can get local news free via websites like WHIO, WDTN and numerous other sources.

DDN is worthless, unless you have a birdcage that needs lining.

It’s not just the DDN. Newspaper advertising revenue has decreased 57% the last six years. It is a dying industry.

The little twerp standing on the flag looks a bit like Saddam Hussein when our guys pulled him out of the hole in the ground where he was hiding.