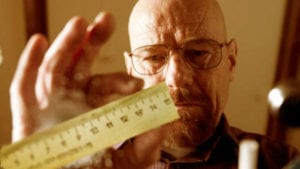 When we hear people talking about running government like a business, most of the time, they are really trying to say “put some measurable, quantifiable metrics on government, so we can keep things under control.” Unfortunately, because most people are of average intelligence- when a Republican says “I’m for smaller government” that translates to “smaller means less to control” so it must be “better.”

Reform, be it school reform, government reform, health care, welfare reform, judicial reform all require an assessment of what the real objectives are, and how do we set meaningful measurements to work toward. In fact, to have a conversation about anything with large ramifications- the first question should always be “what is the right goal- and how do we quantify it.”

A long time ago, I read a business book with profound impact on my approach to solving business problems- “The Great Game of Business [1]” by Jack Stack. It tells the story of a young MBA sent to a failing re-manufacturing plant that International was looking to close up. When Mr. Stack got there- he realized that no one knew the goal, or how score was kept. Kind of like trying to play football without understanding what a first down was, or how you scored. He decided that if the employees knew how the score was kept- profitability, they could all work to make sure the parts they rebuilt, were in fact valuable- i.e. the cost to make them, was less than the cost to sell them. This was “revolutionary” thinking. He taught everyone how to read a balance sheet, how to track costs, how to apply costs, and how to value their contribution. The story continues on how he and a group of managers, hocked their homes, bought the plant, and turned the business into an ESOP (employee stock ownership plan).

Guess what, our government was supposed to be an ESOP. We pay taxes, our investment, and we hire our managers, the politicians, and we’re supposed to get a return on our investment, but we all know this hasn’t been working out well- especially since we’ve seen the value of our votes diluted by our overly expensive system of picking our managers.

Bringing this down to the local level. I’ve spent a ton of time the last few months, working as an advocate to get services delivered to a veteran. I’ve tangled with the VA and their SSVF program, the Montgomery County Veterans Services Commission and a few people in between.

The measurements that we’re supposedly focused on in this country is slowing the rate of veterans committing suicide and making sure they aren’t homeless.

First question is that really what we should be measuring?

There’s a philosophy called expectancy theory- which says if you believe something to be the expected outcome, that’s what you get. I expect Dayton Public Schools to have a 35% drop out rate- so I’m going to focus on “Dropout prevention.” That’s what we’ve done. Maybe if we focused on making the diploma the goal for all, and looking in every available nook and cranny on how to make that diploma the most valuable and attainable goal, we’d do better?

How about working the system on veterans homelessness a different way? Maybe it’s cheaper to create a way for businesses to hire and support veterans with incentives- like having the government pick up the first $20,000 of tax liabilities on at risk veterans? Or working with veteran owned businesses to have a competitive advantage in hiring and protecting low functioning veterans? One thing about hiring a veteran- there is no health care costs, since they have coverage through the VA. We already know small businesses struggle with health care costs (because our system is broken) – so maybe offering to pay for a civilians health care costs for every at risk veteran you hire- giving them a two for one deal?

I’m not saying these are vetted solutions- but, they are a different approach to the problem.

With our local system, it took the MCVSC almost 10 days to issue a check for “emergency food assistance” – thanks to some help from Commissioner Debbie Lieberman, that’s not going to be the case anymore. It took longer for a food stamp card- and we still don’t have the “Obama Phone.” All these things that are mission critical to a successful transition from homeless to homed, are falling through the cracks of a system that is measuring the wrong things. Delivering food stamps to the veteran is the current measurement- but how fast isn’t. See the problem?

How does Fed Chairwoman Janet Yellen measure the success of the economy to make decisions about interest rate hikes? She’s got a ton of complex data that she relies on. How do I? Look at gas prices. We do well when gas prices are low, since so many of us are car dependent to get to work. One veteran I work with is currently living on $238 a week take home. He lives in an apartment in Trotwood costing $485 a month, he drives to his job paying $14.02 in Lebanon (he pays $600 a month in child support). He’s facing eviction because he was cut off from SSVF for “making too much money” – and when you figure in food, utilities and gas money, you can see where a 50 cent swing per gallon of gas makes or breaks him each month. Janet Yellen doesn’t understand that. Nor do the government income guidelines.

The first objective in any problem solving is making sure you are using the right measurements and valuing the correct data.

This is what the point of “Moneyball [2]” was in picking winners in pro sports. Measuring the wrong things doesn’t get you the right results.

I can think of lots of things we’re not tracking correctly, but I’d like to hear yours in the comments.

Feel free to talk about abandoned houses in Dayton, unemployment figures, heroin overdoses, or graduation rates. I’d like your 2 cents.

If you enjoyed this post, make sure you subscribe to my RSS feed [3]! If you wish to support this blog and independent journalism in Dayton, consider donating [4]. All of the effort that goes into writing posts and creating videos comes directly out of my pocket, so any amount helps!
Subscribe
5 Comments
Inline Feedbacks
View all comments

I enjoyed your insightful article and whole-heartily agree with your ESOP analogy but government has been paralyzed by the Corporatists and constitution abandoned. Naomi Klein’s “Shock Doctrine” should absolutely be REQUIRED reading for every politician and each human not only in this country but also the planet who is capable. This compelling read would likely stir a massive collective perspective of what’s happening with so-called phony “free market capitalism”. Its disturbing and eye opening. I’m on my second gut-wrenching read and it is powerful. This may be our last chance in upcoming elections to try something different? South and Central America can teach us what we are now witnessing here. Keep up with the great thought provoking editorials Mr. Esrati.

You should strongly consider abandoning politics, and moving toward work that emphasizes helping the helpless. You’re a closet humanitarian, Dave,

I mean this in the kindest way: you’re pretty obnoxious. You irritate people, and you’re pretty sanctimonious. None of these qualities will be of any help whatsoever in winning an election, but as an advocate for the less fortunate among us they can be powerful tools.

Again, I mean this in the kindest, most complimentary way possible: people will probably give you the assistance you are seeking for vets and others that are struggling just to get you to shut up and go away. Mission accomplished.

Gee thanks Dave C. – with friends like you, who needs enemies.
Congrats on falling into the public perception trap.
Donald Trump is a very successful businessman….. yeah, right.

Well, I really do think you are much kinder and much more of a humanitarian that you let on.

A better question to ask is “should we count on government to solve the problem it created when they caused the problem in the first place?”

Like it or not, the Taliban did a very good job of suppressing the poppy seed crop, which is where opium and thus heroin come from. The successive governments haven’t done nearly as good a job of this, probably because we destroyed the Taliban and its governance structure searching for Osama Bin Laden. Combine this with our open border and the drugs are simply pouring in.

We engage in endless and often needless wars disguised as “overseas contingency operations” in the name of spreading democracy or toppling tin pot dictators (see: Assad, Mubarak, Ghaddafi) and then are stunned by the number of refugees when they flee societal collapse. And then we hurt thousands of our own veterans in the process, and don’t give a damn about whether they can readjust to civilian life.

Locally, Dayton thinks it can tax downtown workers because they all live in the suburbs and can’t vote on city tax, and then the city is surprised when all the workers move to Austin Landing.

We spend all those mills of property tax and have the second highest rate in Ohio and what does it buy? One party dominates the commanding heights, all the patronage jobs, and they keep the gravy train going.

With examples of government like this, is more government really the solution?