I invited 35,000 of you to come to the League of Women Voters’ event tonight via a robo-call. It’s a technology I find offensive, and I apologize profusely for intruding into your homes with a 30-second call.

It’s not my preferred way of campaigning, but, since I don’t have everyone’s email addresses (and there is still a digital divide in my district where many don’t have internet access) it’s the most cost-effective way to contact voters. I can’t even print literature as cheaply- and broadcast media can’t target nearly as well.

So, instead of talking about myself, or telling people to vote for me, I chose a different route:

This is David Esrati and I’d like to invite you to the League of Women Voters’ Candidates’ Night tonight at 6 p.m. at Stivers High School.
Can’t make it?
Learn about the congressional candidates for this Tuesday’s primary online at www.esrati.com/primary [1]
that’s e s r a t i  dot com forward slash primary
It’s time to take the money out of politics and shut down the Wall Street casino.
Sure I want your vote, but only if I deserve it.
This is David Esrati your next congressman. See you tonight!

I’ll post the audio here later. It’s my belief that no one can tell anyone how to vote, or who to vote for. In a perfect world, every voter would be well informed and be able to make rational decisions based on great information. It’s a big part of why I’ve spent so much time on covering this primary. We’ll have videos of most of the candidates up over the weekend. We’ll start with those facing a primary- and then get some of the unopposed people.

Of course, Congressman Turner was a no show, as was Edward Breen who hasn’t spoken publicly anywhere I’ve been. Surprisingly absent  were Sharen Neuhardt and Olivia Freeman. Sharen may have seen my video [2] and decided not to come repeat herself.

For some odd reason, the League invited candidates who weren’t on the primary ballot- which made the evening a little longer than it had to be. I got to hear the Republican challengers to Debbie Lieberman and Judy Dodge for the first time. Lieberman will be facing Kettering Councilman Ashley Webb and Dodge gets to run against former County Sheriff Dave Vore. I’m going to be honest, all four are really nice people, but none of them really addressed the true problems facing our county government- that the system which was created with the Northwest Ordinance over 200 years ago is desperately broken and we need to reinvent the whole shooting match. We also need to dump our county administrator- but, rumor has it she may be headed out before the election.

I have a slight issue with Dave Vore, which I hope he’ll understand, because frankly, he’s a very charming guy (he was sweet talking my 83-year-old mother like a pro after the event): how can he expect support when he quit mid-term the last time we elected him? I’m not a big fan of political maneuvers for party succession plans. I don’t think parties should ever be allowed to appoint a replacement- and if you quit, the person who had the second highest vote total should have first refusal on your job (Instant Runoff Balloting makes this really work well). 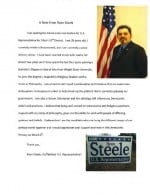 I picked up literature from Ryan Steele for the first time, complete with a typo. He even had signs (which I neglected to take a picture of- they’re blue and white). Also, got Sharen’s first campaign piece- and wouldn’t you know it- most of it is about her. I’ll post tomorrow. I also picked up a piece from John Anderson- will post it as well.

There were some candidates who had literature that was so bad it was scary. One candidate who terrifies me, didn’t even have what office he was running for on his literature. After the event was over, he even got into a shouting match with his opponent. Where’s the news when the politics get rowdy?

Speaking of media- again, a no show. Not a TV camera or reporter in the house, except me- and Mike Bock from DaytonOS.com 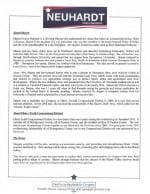 While all the pundits’ talk about the showdown between Sherrod Brown and Josh Mandel (and it appears that Sherrod’s mug is on a campaign mailing by Sharen Neuhardt) we had an appearance by Eric LaMont Gregory [5], a Republican challenger from Beavercreek. Considering that his territory is the entire state of Ohio, it was nice to see that he came to give his 3 minutes to us in Dayton- it’s more than our Congressman can do.  That’s a 5-way race by the way. Bet you can’t name any of the other candidates [6] (and there are 9 total including 2 Green party candidates in a primary!)

We had some Bible thumping, wrapped -in-the-flag candidates, too. Somehow, the only people who I feel should ever be able to get away with the “God bless America” closing line is the president and even there, I question if it’s totally appropriate. Tonight there was a lot  more preaching than I’m used to. 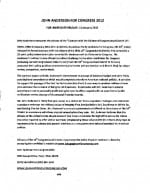 I’ve got to say that as always, Mack Van Allen stated his disdain for polarizing politics [8]. It’s a stand I agree with him on. I feel uncomfortable when candidates talk more about having God on their side instead of the voters on their side.

I’d like to thank the League again for hosting the event, but as a candidate, here are my recommendations for doing these events more smoothly. Ask every candidate for a 75-word bio to be read by the moderator to introduce each candidate. That way the basics are out of the way. Three minutes isn’t long enough for good political speech- give every candidate 5 minutes and enforce it with a hard cutoff. Don’t invite candidates who aren’t on the next ballot- you don’t want to waste either the candidates’ time or the voters’- and frankly, what’s said 6 months before the election isn’t relevant. I really like questions and answers- but, here is where things get difficult, since in my primary there are six candidates. I’d like to see each candidate get to ask one of the other candidates a single question- and allow a 2-minute answer. After that, allow each candidate to give 2 more minutes to say anything they want- rebut any questions or clarify their positions. Have all the candidates near the podium, so it moves quickly. The only reason questions from the audience are a bad idea is because you get plants and prepared questions. Let the candidates show off their abilities to engage their opponents and respond on the fly.

Again- if I robocalled you today, and it was unwelcome, I apologize. Thanks to Dayton Board of Education member Nancy Nearny for thanking me for the call and letting her know about this event- and her words of support for my presentation tonight. It meant a lot to me that a few people came to this event who wouldn’t have had I not done the call.

Here are the videos- we went in reverse alphabetical order, except McMasters was delayed to last for some reason.
Video of Mack Van Allen

Video of David Esrati (me)

Video of the sole Republican who shows up to talk to voters at these forums, John Anderson

I’m still waiting for the Tom McMasters video to upload- will post asap.

If you enjoyed this post, make sure you subscribe to my RSS feed [9]! If you wish to support this blog and independent journalism in Dayton, consider donating [10]. All of the effort that goes into writing posts and creating videos comes directly out of my pocket, so any amount helps!
Subscribe
3 Comments
Inline Feedbacks
View all comments

I posted my video of the 10th Candidates from the LWV on Youtube but I did not link them from my site.  They can be found at http://www.youtube.com/user/McMasters4Congress?feature=mhee

I was a recipient of one of your robo-calls.  Two things:  (1) it was the least annoying robo-call I have ever received, and (2) I wish it did not come the day of the event.  One or two days earlier would have been better.

@Tom- thank you. I wish it had come a few days earlier- but funds were short. I realize robo-calls are an intrusion and not always welcome, that’s why I try to deliver them during the day, to answering machines. I really do want to win because the best informed voters chose me- not because of ads or mailings or endorsements.