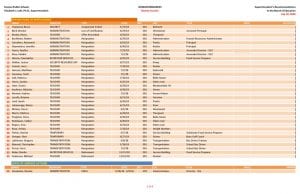 The HR report should just be called “Ch-ch-changes” and makes for fascinating reading. Click to download PDF

July 10 is the magic date to re-sign your contract with Dayton Public Schools. Sign it, and then resign after that, and the board tries to vote properly to sanction you for breaking the contract. Since Rev Harris has been elected, they rarely get the vote right.

However, it means this is when we see the churn. Typically about 20% of their employees bolt every year, which is high. Compare that to top performing schools like the one David Lawrence is taking over in Northmont- where no one leaves, you start to see a pattern.

Since the 48 hour rule precludes them from having a complete list before the “review session” tomorrow- but we still get a few glimpses on what’s happening.

Belmont gets a new Principal from Texas- probably thanks to Dr. Donetrus Hill, one of the few smart guys still left in the district. Welcome Dr. Toron Wooldridge, who seems to have a gap in employment since 2016 on his Linkedin [2]. Quick notable fact, he was signed as a 6-0, 232-pound Inside Linebacker from Houston, TX to Texas A&M. He’s come a long way from  being a “Redshirt freshman … who sat out the regular season because of academic problems” [3] to Ed.D. The gap in employment, may have been due to the loss of family members due to a distracted driver. Wooldridge made a push in Texas to adopt no-text while driving laws [4].

Change 2 is that Nelson Stone, formerly principal of the boys school, has now been assigned to Ponitz. This after he was first supposed to go to Meadowdale. Ray Caruthers went to be the Trotwood Madison HS principal.

Change 3- is that Norris Cole’s uncle is the new Dunbar Basketball coach. I don’t know if Lyle Cole can fill Pete Pullen’s shoes, but he sure can fill a whole teams worth of Chuck Taylors without much work. Amazing that Taylor still hasn’t been brought up on charges for perjury or to pay the district back the copious amounts of cash [5] it wasted because he lied. Not sure if Cole is a teacher, which only seems to be important if your name is Powell and you’re part of a winning football program.

Change 4- the district let Jim Cole, the man who rebuilt the Dunbar Women’s Basketball team and was coach of the year last year- go. No replacement yet, and Cole was snagged by Fairborn. Watch the Lady Skyhawks take off.

In the good news department, Dr. Bob Buchheim got the message loud and clear after his second demotion in less than a year and left town.

The Office of Exceptional Children seems to be getting cleaned out after Dr. Roberson left with two more resignations.

There are a bunch of new supplemental pays for already well paid administrators- including District AD Shawna Welch- and Erin Dooley- but, we can’t tell if these are in addition to, or replacements for. Lolli likes handing out money to people at the top, and to lawyers.

There are also some new “Dean of Students” positions- which could just be a new way of putting people into assistant principal positions without having an actual principals license. Some superintendents have done this in the past- others wouldn’t.

And as a last insult to injury- when the last school board claimed it was broke in November of 2016 they fired Marijane Recob who had been running the Challenger Center at Kiser since it began. Now, they’ve hired 2 people for $40K each, to do what she did solo for about the same money. I’m guessing Marijane would have continued doing that job for $20K if it had been offered to her because she loved it that much.

We’ll see by the business meeting how many others decide to ditch the good ship Lolli-pop.

Who are you trying to subjectively lambast here? Its hard to tell…

Btw: REAL classy bringing up the man from Texas who lost family in an automobile accident as the reason for his gap in employment on his beloved linkedin. You should have just asked for his full CV.

Btw, as a parent in the district, I am pleased with all the items you’ve listed.

Anybody with kids attending DPS should get them out of that school system ASAP. Move, find a private school, teach them at home, whatever. It’s an AWFUL school system, among the worst possible educational options available.

I’m curious as to when Marianne Recob really started at the Challenger Center. Perhaps it was after the new building opened? I taught there the 15 years before they closed the old Kiser. With all the mandatory Challenger Center trips we took, you’d think I’d have heard of her. I hadn’t until I read this…