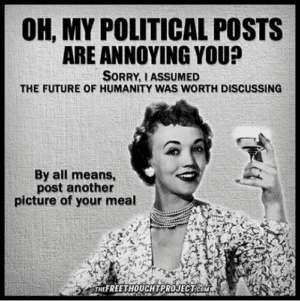 The first amendment to the Constitution dictates that politics in America stay out of the church. Maybe it’s time for a 28th amendment for politicians to stay out of medicine.

“Congress shall make no law respecting an establishment of religion, or prohibiting the free exercise thereof; or abridging the freedom of speech, or of the press; or the right of the people peaceably to assemble, and to petition the Government for a redress of grievances.”

Lately, we’ve had politicians practicing medicine without a license, which is illegal by the way, as is practicing law without a license. The problem may stem from the fact that to practice politics in this country, there is no competency test, no requirements other than residency, age and sometimes to be free of a criminal conviction. Need proof that anyone can get elected, look at Dayton’s Mayor or 45.

In fact, we’ve almost created a catch 22 system for politicians in this country. Catch 22 refresher:

A catch-22 is a paradoxical situation from which an individual cannot escape because of contradictory rules.  The term was coined by Joseph Heller, who used it in his 1961 novel Catch-22.

An example would be: “How am I supposed to gain experience [to be hired for a job] if I’m constantly turned down for not having any?”

Catch-22s often result from rules, regulations, or procedures that an individual is subject to but has no control over because to fight the rule is to accept it. Another example is a situation in which someone is in need of something that can only be had by not being in need of it. (A bank will never issue someone a loan if they need the money.) One connotation of the term is that the creators of the “catch-22” situation have created arbitrary rules in order to justify and conceal their own abuse of power.

Final 3 words are relevant here: “Abuse of power.” Which is often what we have when politicians try to play doctor for the television cameras. Until the last year, most of this posturing circled squarely around one medical procedure, abortion, or as Republicans would re-phrase it, “the death penalty for the unborn.” Note, while most of them are very anti-abortion, most of them have no problem with the death penalty, as long as it is handed out inequitably to poor people and minorities. And, God forbid, we talk about contraception to teenagers, because that would also be morally wrong. Don’t talk about sex with children because, well, they might start doing it after they hear about it.

And by the way, war, when entered into correctly in this country, is an act of congress- a thing politicians do (to others). War is the last resort, it is a tool for those who failed at statesmanship, which, despite the non-gender neutral insertion of man in the middle, is the art of the deal (so sorry, I had to stick that in) to broker a mutually acceptable peaceful resolution to a perceived inequity.

That last word, “inequity” is important, since the next civil war, the next uprising, or the next collapse of our country- will be centered around that very concept- the un-equal sharing of the collective wealth of this nation. And why do our politicians fail to see the coming storm? Because our election system isn’t rigged by the Russians, it’s rigged by the wealthy who discovered with subtle manipulation over time they can game the system to elect puppets, or as I like to call them, “the best politicians money can buy.”

Onto what our bought politicians are doing by meddling in medicine without a license.

It’s big news when a local “leader” comes up with his baseball solution to heroin overdoses- a three strike rule, where on your third OD, no Narcan. Local Sheriff Chestpuffer decides to go one step further- his deputies won’t carry Narcan. Sidenote to idiot sheriff, we have an average of 2 children a week treated for coming into contact with heroin- and some have died, so now, your deputies without Narcan will be performing abortions on actual children instead of future children, oh, and btw, we also have officers of the law who need to be revived with Narcan after contact with junkies- so it’s OK for them to die while performing their job in your department.

Note, I’m not linking to either of these idiots, they don’t deserve the link juice, just take my word for it. It’s out there, and you know how to google. Besides by the time I publish this, there will undoubtedly be copycat morons in communities across our great nation. Guaranteed. Ohio is not the only incubator of elected idiots.

Next up comes local laws concerning the banning of medical pot dispensaries in our state, long before they are even done writing the rules for how these facilities will be licensed and monitored. We used to call this NIMBY- not in my back yard, and it applied to other necessary evils of society, junkyards, landfills, toxic fume spewing factories and power plants, prisons, you name it. Hell, life would be so much better if I didn’t have to have a bathroom in my house where my roommate stinks up the place- but, well, I poop too, and so do you. The true meaning of your shit doesn’t stink as applied to politics is NIMBY- a failure to understand that collectively, we have to have bathrooms and landfills (but public bathrooms, that the homeless can use…. no, we don’t need those- or park benches they can lie down on…. the list goes on).

Medical pot is not recreational pot. Sort of like Morphine isn’t the same as Heroin, well, wait, it really is, except one is administered by professionals and the other is amateur hour. There are people who could benefit from medical pot, including my mother. She’s an 89 year old woman with dementia. She’s lost 20 pounds since my father died, has problems sleeping (I had to ween her off ambien, after the episode where she walked across the street in her nightdress at midnight, to pound on my door to demand I give it to her- 4 hours after I’d given it to her.) She gets agitated, she forgets to eat, she has difficulty sleeping- the only danger in medical pot/edibles- is she runs out of ice cream/chocolate/or Trader Joe’s Triple Ginger Ginger Snaps [3] (try them, they are the bomb). While medical pot would, and may have helped her  right now, thanks to our political geniuses playing doctor, it won’t be available legally until 2018. Mom would say thanks, but, well, she’s not really with us fully these days.

What makes a local council person an expert in medical treatment of dementia with medical marijuana? Not a damn thing. In fact, when have politicians actually come up with any law that provides us for better health care? (I’m leaving this one open- trust me, there isn’t one that everyone will agree on). From abortion, vaccinations, to what goes in our food, to mental health care [4], to death panels and assisted suicide, our entire premise of enacting laws to cover health care, by people who have no credible expertise on any of the above, is a prescription for malpractice.

And what is the problem with us? In order to run for office in our current political client, you probably would receive the following medical diagnosis:

Narcissistic personality disorder is a mental disorder in which people have an inflated sense of their own importance, a deep need for admiration and a lack of empathy for others. But behind this mask of ultraconfidence lies a fragile self-esteem that’s vulnerable to the slightest criticism.

Hell, I’ve been told I have it- and the nerve of me, writing this blog about all of this, what are MY qualifications? I’ve got a degree in marketing.

At some point, and I’m seriously afraid of this, we may need to turn to the military for a solution. No, not shooting people, but, adapting a standardized test for job qualifications. The military uses their ASVAB test-

Imagine all politicians having to pass a test, including a basic understanding of actual civics, to be taken before running for office? There are members of the State Legislature that recently had to be schooled on the laws they created about school busing for charters and who pays for it. Sad, but true.

And, before you wonder what this veteran’s ASVAB score was, the lowest was a 113 in clerical, the GT was 128, and I think they give you 30 for just knowing how to use a pencil and fill in the dots. You needed a 32 to be a truck driver, 25 to be an 11B (infantry, bullet-stopper) when I took it in prosperous peacetime. The top scale not being 100 is one of those things with the military, I don’t know what the highest possible score was, but, my scores put me in the 99th percentile at the time. Continuing with my narcissism, I also had a high enough score on both the DLAB (Defense Language Aptitude Battery) and the FAST test (Flight Aptitude Selection Test), in basic training I was selected as a potential candidate for West Point prep as well.

And, while we’re at it, maybe the idea of testing voters needs to be considered as well? Dayton sends slate cards to all the polling places, so even the functional illiterates can vote the party ticket by cross referencing names to the ballot (even those who can’t read, can shape associate).

It’s time to re-evaluate not only our laws, our law makers, but the process of a democracy in a world where Facebook has become a credible news source- or this blog.

For our elections to be truly certified, we need to make sure, we as a country aren’t certifiable (crazy).

Let’s pass a constitutional amendment limiting public office to people who aren’t morons. It may or may not solve a lot of our problems.

If you enjoyed this post, make sure you subscribe to my RSS feed [7]! If you wish to support this blog and independent journalism in Dayton, consider donating [8]. All of the effort that goes into writing posts and creating videos comes directly out of my pocket, so any amount helps!