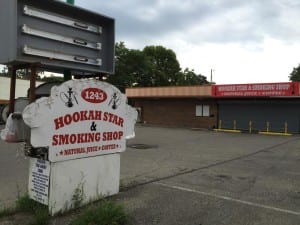 The Hookah Star Smoke Shop and Natural Juice Bar wasn’t a normal retail establishment. It wasn’t a bar either- it was a party palace, especially after 2am when normal bars closed.

It’s been a sore spot for the South Park neighborhood almost as soon as it opened. Loud music, trash, and the patrons running around the ‘hood at all hours on Friday and Saturday nights. The police had finally started showing up the last few weeks to shut it down and clear it out. They also were checking it out on curfew sweeps the last few weekends at 11- to catch kids under 18 out after 11.

On Aug 3rd after one of the police raids, the owner posted this on his FB feed:

So he thinks he’s just in trouble for “over capacity” due to fire code. Apparently, the City doesn’t do a good job of explaining permitted uses to him. He was operating the wrong kind of business in the building at the wrong time.

After the shooting early Sunday morning as the police came for a 3am roust [3], the city finally takes zoning seriously:

The city’s zoning department, on Monday, told the Hookah Star & Smoking Shop, 1243 Wayne Ave. to cease occupancy immediately because the zoning district does not allow nightclubs.

“To me, it’s crazy. They consider a hookah bar a night club – it’s not a nightclub,” said owner Namr Ibrahim. He cited the absence of alcohol, a dance floor and strippers at the Hookah Star to support his claim.

Neighborhood groups said the smoke shop has allowed large crowds to gather at all hours of the night and early morning.The business has been a magnet for noise and troublemakers who often visit the shop after the bars close at 2 a.m., according to neighbors.

Hmm, not a night club- but “we was jumping.”

No other competent city would have let this go on for so long. Here is a legitimate public nuisance, ruining the quality of life for a neighborhood that has done everything within its power to pick itself up- so successfully in fact, that the property tax values were raised, when everyone elses went down.

If the city spent more time doing the things they were supposed to be doing, instead of buying vacant buildings downtown with no stated public use, for $150K over appraised value, maybe no one would have gotten shot.

Then again, maybe that’s what it takes to get laws enforced in Dayton.

If you enjoyed this post, make sure you subscribe to my RSS feed [5]! If you wish to support this blog and independent journalism in Dayton, consider donating [6]. All of the effort that goes into writing posts and creating videos comes directly out of my pocket, so any amount helps!
Subscribe
2 Comments
Inline Feedbacks
View all comments

It isn’t just large groups gathering after 2 a.m., it was almost two years of drug dealing on the property, drinking *outside* the building, public urination, broken bottles, piles of trash left by patrons, cars full of marijuana smoke, and VERY public P.D.A. in inappropriate places. All things Mr. Ibrahim is well aware of. (And, since when are nightclubs required to have strippers?)

From Seattle’s independent weekly paper, The Stranger, is this article, “Mayor Has No Plans to Change Course on Hookah Bar Crackdown,” in which Seattle’s mayor says hookah bars are illegal because of the state’s ban on smoking indoors.

But Murray is making this more than a public-health issue. When he announced the crackdown earlier this month, he claimed the 11 hookah lounges in the city should be shut down because they are connected to fights and murders, including the recent murder of community leader Donnie Chin near a hookah lounge in the International District. Police chief Kathleen O’Toole came to the press conference where the crackdown was announced armed with statistics that included three recent murders and 100 fights near hookah bars since 2012, but she admitted bars and clubs bring about similar issues.