When the ship is sinking, people do desperate stupid things. Of course, if you’re the captain of the ship, and you know you were at fault, sometimes it’s just about self-preservation. Lucky for Dayton City Manager Shelly Dickstein (and her partner in crime, Mayor Nan Whaley) the FBI and the DOJ seem to have either been overwhelmed with info about their criminal behavior, or, they’ve just been too busy with other things like a mass shooting, and rounding up a drug cartel, to get back to cleaning up the “culture of corruption.”

On Monday, this site first reported that Mrs. Dickstein was getting her hubby hired at DPS into a senior executive position [1] that he seems oddly misqualified for. Sure, Dr. Libby Lolli loves her PhD types- (including relatives) but, helping out her partner in crime on the school closing task force by hiring Dr. Gary Dickstein and then trying to hide it from the board in the review session should have gotten Lolli fired. For the first time, I saw John McManus show some real spine, cutting off Lolli and her false indignation of being accused of lying about why he was or wasn’t on Board Docs.

Sheila Taylor and even Dr. Walker all had to really speak up to convince Board President William Harris that they wanted to go into exec session about this hire. Harris- without his puppeteers Mohamed Al-Hamdani and Jocelyn Rhynard, looked terrified as he reluctantly allowed them to go into exec, after they’d already made a motion to adjourn and seconded it- before undoing it. Karen Wick-Gagnet sat through the whole thing without a peep- because she knows who does all their business meetings in her restaurant and, that when Rhynard and Al-Hamdani return, they can’t stop the hiring anyway. 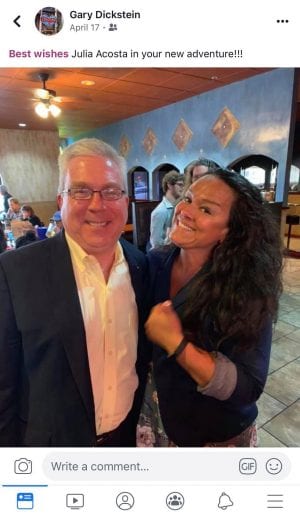 But, wait, theirs more. Shelly also hired one of her hubby’s favorite underlings at Wright State, who it turns out, couldn’t make it through the probationary period. The HRC has always been a bizarre little part of the City Structure- usually overpaying a political patronage person to run it. With the recent arrest of Roshawn WInburn from the department, you’d think they’d be more careful.

The city of Dayton has discharged a recently hired senior civil rights investigator who was accused of making “hateful” and “racist” remarks to a bartender who took her beer away.

Julia Acosta-Grommon was appointed to the Human Relations Council in April after being highly recommended by the city manager, according to records in her personnel file. She previously worked as the director of Wright State University’s office of Latinx, Asian and Native American Affairs….

Acosta-Grommon, who was hired at a salary of about $60,000 per year, was still a probationary employee when she was discharged.

Her probationary period was to last for six months.

Acosta-Grommon, who took a pay cut to join the city, previously volunteered at Dayton’s mediation center and previously worked at multiple centers for women, LGBTQA affairs and the Bolinga Black Cultural Resources Center.

A newer article quotes Acosta-Grommon saying she “hated black people” at the bar. [4]

But, this still doesn’t explain why Mrs. Dickstein is, or was even eligible to be the city manager. She was the prime person in charge of the sacking of the corner of Wayne and Wyoming in the Twin Towers neighborhood- by declaring it all “blighted” while making 3 rounds of options on 82 pieces of property, to aggregate 12 acres for a new Kroger that she didn’t have a contract on. 5 years and $5M later- we have an empty lot on the corner, and nothing to show for it.

There is also what used to be called “The Hole on Ludlow” where the city gave $2M to “Student Suites” – a developer from out of state, to tear down the old Dayton Daily News building and the beautiful Schwind Building. The $2M disappeared, Steve Raush had the demolition contract- and tore down part of the Dayton Daily that he wasn’t supposed to, then left a hole in the ground, and then got the historic Cox HQ on a mechanics lien, while Dickstein and her crew of screw-ups had to pay another demolition company, Bladecutters more money to fill the hole.

Don’t make me explain how they can’t properly account for $3.4 M of HUD money- if they can’t explain it, why should I have to?

Dickstein hasn’t shown she’s capable of doing much other than give-away deals to “leverage our tax dollars” as Chris Shaw likes to explain her bad development math. You know where the poor people who do pay taxes, buy buildings for $450K that there is no public use for, and then sell them for $10 to out of state developers so they can then compete with local tax paying, employers who have to compete on this unfair playing field. Yes- and throw in the community’s “Garden Station” for free- why not?

The final straw should be the paper trail left by the donations to support Issue 9- the income tax increase that was sold to the citizens as a way to raise money from people who don’t live in the city. The only problem is, the campaign was paid for by all the people that benefit from their privileged status with the city. It’s called pay-to-play and when you realize that almost every vendor who does business with the city was told to donate (or lose our business) you start to see why the FBI and the DOJ got started. There are other issues with that donor list, but I’ll fully outline those when I file a lawsuit in Federal Court claiming election tampering, fraud and racketeering. Normally, these are things that FBI and DOJ would do, but since they seem to be the culture of the impotent, someone will have to step up.

In the meantime, Mrs. Dickstein, save us the trouble, and just step down and take your husband with you.

If you enjoyed this post, make sure you subscribe to my RSS feed [5]! If you wish to support this blog and independent journalism in Dayton, consider donating [6]. All of the effort that goes into writing posts and creating videos comes directly out of my pocket, so any amount helps!
Subscribe
1 Comment
Inline Feedbacks
View all comments

FCS construction owned by Dayton firefighter Sean Frazee, why does he still get demolition contracts? Culture of Corruption ass city