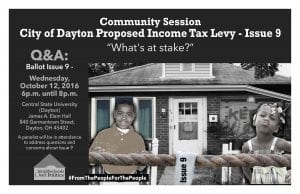 [1]The activist group Neighborhoods Over Politics (NOP) is hosting a Q&A on Dayton Issue 9- the tax increase from 2.25% to 2.5% this Wednesday, Oct 12, 2016 from 6pm to 8pm at Central State University West campus at 840 Germantown St. The event is free and open to the public.

By now, if you are a Dayton resident, you’ve seen the blue and green signs and if you are a likely voter, you’ve gotten a mailing “Paid for by “Neighborhoods for Dayton’s Future” [2] Michael Voelkl, Treasurer. NOT PAID FOR WITH PUBLIC FUNDS.” Michael used to be the tax commissioner of Dayton, but retired a while back. [3]

But, the real question is, who the hell does fund this?

It says it’s endorsed by Dayton Firefighters, AFSCME/DPSU, AFL-CIO and the Chamber of Commerce.

Looking up organization in the Montgomery County Board of Elections worthless website- we see that they haven’t filed a campaign finance report since the annual of 2015 [4]– so there is no way to tell who’s paying for all those signs and mailings.

The former Mayor, Gary Leitzell took the time to actually read the full ordinance and makes mincemeat out of their claims on the mailer [5].

But, this isn’t a post to explain why I think you should vote no on issue 9- it’s about the Q&A session- which you should go to and ask the questions yourself. There won’t be any huge dollars spent against this tax hike, if it’s to fail, it will depend on a grassroots effort.

Issue 9’s backers are claiming helps “every neighborhood” and includes a bizarre venture into pre-school by City Government- instead of the School Board.

Most of the other claims are to do the things they already are supposed to do but fail at- like cutting grass on vacant lots, or resurfacing streets or taking care of parks. Want to have an extra 2 million right off the bat- don’t buy real estate for which there is no public use- and then come back and say “we need more money.”

I’ll be at this session on Wednesday with my video camera to record it and put it up on YouTube.

And how typical and outrageous is it that a DAYTON issue is going to have a Q&A session way out there rather than downtown where our Dayton residents can have half a chance of actually attending?!???  The people in Dayton proper are by and large, poor.  Yet, they keep getting more costs, fees, fines, taxes and expenses heaped on them.  This is not only ludicrous; it’s downright cruel.  I’d like to know who chose the site of this meeting…..and like you, find out who is funding this campaign to yet again raise taxes on those whose backs are already broken from carrying too-heavy a load.  Thanks for writing about this, David.

“way out there”? You might want to get out a map. It’s about 5 minutes from downtown.

This income tax hike proposal is a poster child for why everyone outside of Dayton city limits bitterly opposes any concept of regionalism and will continue to do so for the foreseeable future.

70% of all city taxes are paid by non-residents who can’t vote no on this tax and that still isn’t enough to satisfy City Hall.

Good luck trying to get any answers to any questions.  When we had a rep & a commissioner (don’t ask me his name – all I know is he reeked of being a salesman in a prior life even though he kept saying he was a business owner) come to our neighborhood association meeting last month, all they were able to do was dance around the questions.  No one actually answered anything; they stuck to script about what they promise to do with the money.

You are not voting on road repair, you are not voting on early childhood education or even on more firefighters or police.  You are voting for an increase for money going into the general fund so they can do whatever they want with it regardless of what they tell everyone they are planning on using it for.  And they will get it because all the voters seem to be able to do is read the mailings and not do their home work.

I asked if they were going to stop buying properties that they always took a loss on; why they picked the number .25%; why the same line was given about additional fire and police in this measure like the last one.  On and on.  No real answers, just more of the same nothing.

I was promised, though, that if they were not good stewards of the money for the next 8 years that we would have a chance to not renew it.  That’s when I asked  if the wording on the ballot was going to be as misleading as the wording on the last ballot when the renewal was made permanent.  Guess what their answer was.

If there is a man, woman or child in America that has not been groped, fondled, kissed or verbally sexually harassed by Donald Trump, please contact the nearest media outlet immediately.