When I wrote the post back before the election about where the issue 9 money came from, I was flabbergasted.

Not only by the amount of money they spent and where it came from, but the average donation was higher than most federal campaigns. The average was $1873. Issue 9 raised the City of Dayton income tax to 2.5% and promised millions of dollars to a quasi-public organization with no voter oversight- the “Preschool Promise” and “Learn to Earn” people. 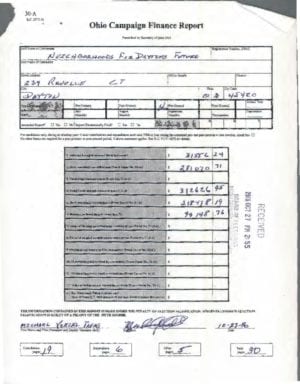 [1]On the reporting deadline, “Neighborhoods for Dayton’s Future” they said they had a balance on hand of $94,148.76

I waited for a post campaign report. It never appeared.

I waited for a 2016 annual report- it never appeared.

I wrote Jan Kelly, director of the Montgomery County Board of Elections and asked where it was and got the following response:

Good afternoon.  You raised a question as to whether or not a local PAC (Neighborhoods for Dayton’s Future) has been compliant with reporting requirements under campaign finance law. The PAC filed a 2016 Pre-General report as they were participating in promoting an issue during last falls’ General Election cycle. They did not file a Post-General report. They did file an Annual Report. Our campaign Finance Department has not yet audited all 2016 reports. All 2016 reports are scheduled to be audited over the summer including all PAC’s. If a PAC failed to file a required report, at the conclusion of the those audits, letters will be sent to the Ohio Election Commission listing all PAC’s which are not in compliance. We expect that all audits will be complete by the end of July and letters to the Elections Commission would follow shortly thereafter. I hope explanation this answers your question.

Repeated calls to Ms. Kelly went unanswered as to where the annual was. Finally, on Friday, I contacted David Landon who is the R in charge of campaign finance reporting and he got me a copy of the annual. It was 2 pages long. 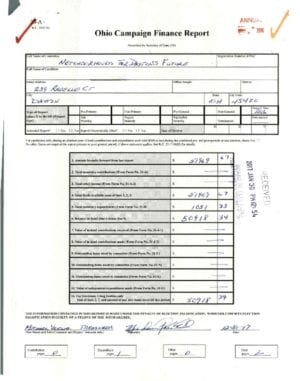 It showed only one expense in the period between the pre-election filing and the annual: $1051.33 to Code Credit Union on 12/30/16 for a “Visa PMT” – it never said what the payment was for.

And you wonder why I didn’t trust the PreSchool Promise/Learn To Earn quasi-governmental school board with our tax dollars?

We need an immediate accounting of where the Political Action Committee money went.

If you enjoyed this post, make sure you subscribe to my RSS feed [3]! If you wish to support this blog and independent journalism in Dayton, consider donating [4]. All of the effort that goes into writing posts and creating videos comes directly out of my pocket, so any amount helps!
Subscribe
2 Comments
Inline Feedbacks
View all comments

Here’s what I don’t get – City Hall on one hand cries about businesses moving to Austin Landing, but then on the other they increase taxes on the few productive citizens who are still here – increasing the incentive to move out. 2.5% of a salaried professional job adds up really quickly and you can bet it’s factored into any sort of business analysis.