“Half of the preschool department is leaving for various school districts-roughly 16 teachers. Most are special-needs preschool teachers who are going to various districts that still have four day preschool- that understand that you cannot get IEP work done effectively without a planning day. Thank you for bringing to light all of these ridiculous decisions.”

A  principal with enough seniority to retire twice- (almost)- says, “If she stays, or Roberson is made superintendent, I’m out. Bring back Lawrence, Brathwaite and I’ll stay”  (David Lawrence and Debra Brathwaite- former DPS administrators) Als0- “they are cutting half of my Title 1 reading and math intervention specialists, and replacing them with a phonics coach. I don’t need a separate person to teach phonics, just give my 1st and 2nd grade teachers training, and we’ve got it covered. What a waste of money”

A teacher- “Hello David I also will be resigning although I have not told my principal or human resources yet, but I am a science teacher at XXXXX one of only two physics teachers in the district and I will be going to teach at a small county school where the pay is only $1200 difference with smaller class sizes and my kids also go to the school where I will be teaching next year. I didn’t even apply for the job…?, I was recruited by community members who knew I had a science background..that’s how bad science teachers are needed all over the state. U can mention my case, just don’t mention my name or school”

I’m still waiting for other school boards to approve the hiring of 2 other principals and one top level administrator. There is a possibility of 2 additional names to add to this list. 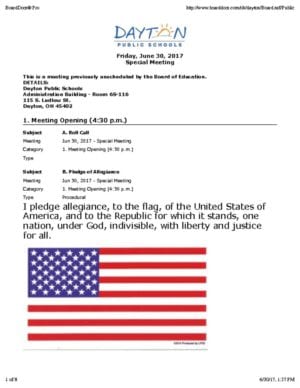 The last minute agenda, for a School Board that can’t get it together. PDF- click to view

The School Board is supposedly meeting at 4:30 pm today, a meeting that was hastily called Tuesday night- after another hastily called meeting. The agenda wasn’t published until this morning- and it appears it’s the entire appropriations for next year. Can someone explain why this wasn’t known to have to be done before Tuesday night? And why the public shouldn’t have been given adequate notice and time to review the issues? 48 hour rule? We’re lucky to have a 4 hour rule under Rhonda Corr and Hiwot Abraha.

More examples of complete and total incompetence and mastery of management by the seat of her pants by the current Superintendent and Treasurer.

Time to clean house, before there isn’t a house left.

Any more people want to tell the board about their resignation here first? [email protected] [2]

And, btw, it was nice to see the Dayton Daily News share the story of Judge Dankof ruling in favor of the district over former treasurer Craig Jones – 2 days after I published it. Jones’ lawsuit was about this very BS kind of meeting announcement. Dankof obviously doesn’t care about the intent of the law- only the minutiae. Hopefully, next time he runs, he has opposition, since he doesn’t deserve to represent a public he won’t defend properly against abuse of power by other elected officials.

If you enjoyed this post, make sure you subscribe to my RSS feed [3]! If you wish to support this blog and independent journalism in Dayton, consider donating [4]. All of the effort that goes into writing posts and creating videos comes directly out of my pocket, so any amount helps!
Subscribe
4 Comments
Inline Feedbacks
View all comments

It is incredible to me that the district has still not decided if they are going to move early childhood from a 4-day format to a 5-day format. Special education preschool teachers were not given enough time to write IEPs and complete all of the additional tasks that working with students with disabilities entails last year under the 4 days/week format. The only district near DPS that has preschool five days a week is Miamisburg, and even they have every student on a half day format. I interviewed the teachers there to see how they had students five days a week and still found the time to write IEPs, progress reports, conduct testing, AND work in all of the training required for SUTQ. Their answer: They DONATED their time. Weeknights, weekends, holidays. They also feel respected by their superintendent.

It is an unreasonable expectation to treat the classroom staff with such calousness AND to expect us to donate our time. If you want to treat us as hourly employees (via scanning in/out for work), then that is what you will receive. I feel bad for the team who I left behind, but I cannot function under such uncertain conditions, and our families should not either. Good luck finding new teachers for over half of the special education preschool classrooms. So much of this could have been avoided if the top brass had listened to the feedback of those of us who work in the classrooms day in and day out.

While I agree with all of your statements, I must point out that Miamisburg does NOT go 5 days, West Carrollton does….who did you interview? Everything else you said is true (especially how DISRESPECTFUL it is to parents to not know their child’s schedule next year) , but it is much more impactful if it’s backed up by facts.

DPS/CF is so thoroughly screwed up that keeping track of their many transgressions is overwhelming.

Thanks, Dave, for performing a public service by holding their feet to the fire via this blog.